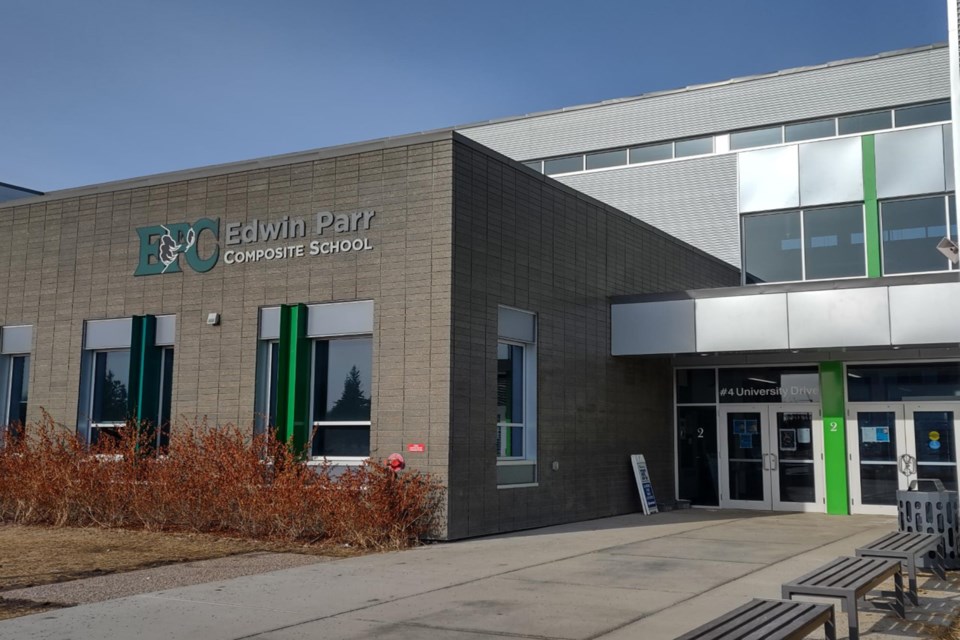 Many parents are growing increasing weary of the pandemic, especially with high numbers coming out of Edwin Parr Composite school, where the outbreak now includes 73 total individuals, including some with the B.1.1.7 UK variant.Chris Zwick

It’s a sentiment just about everyone can relate to. A year into the COVID-19 pandemic, and nearly two weeks into an outbreak at Edwin Parr Composite School, many parents are at their breaking point.

When Krystal Gerlitz and Robbie Bellefeuille learned their son, a student at the school, was found to have contracted COVID, they didn’t panic. They just kept on with their daily lives. Then it was found it was the more virulent UK variant B.1.1.7.

“He doesn’t care,” said Gerlitz in an April 3 interview over the phone from her home, where she is currently isolated with her family.

Another EPC parent, Marnie Cormier, shared that her son had also been diagnosed with the UK variant.

“My son had cold and allergy symptoms, much the same as he does every spring,” she said. “I picked him up early from school Monday because of those symptoms; got tested Wednesday; and had his positive results by evening. We heard rumblings that there was a UK variant in town but didn’t get official confirmation that he was positive for the UK variant until Saturday when AHS called us.”

Cormier said she notified the school that evening and received a call from principal Des Nolan within a half-hour.

“Their response to this outbreak has been great and thorough. AHS testing was easy to book and quick and efficient,” she said.

That wasn’t necessarily the case for Gerlitz and Bellefeuille though, as the testing site in Athabasca was so busy at that time, they opted to go to Lac La Biche. Others have travelled to Westlock for testing, but more testers are now in Athabasca to handle the rapid increase and spread.

And while Gerlitz and Bellefeuille’s son seemed to take the diagnosis in stride, Cormier’s son was a little more concerned, but he and the family are adjusting.

“He was scared, he has asthma, so it scared him not knowing how mild or bad the symptoms would be,” said Cormier. “This is his second isolation so he definitely isn’t liking being alone in his room all of the time.

We FaceTime with him during the day and during supper time. Getting outside time in the yard has been important for his mood. So far, the worst symptoms have been headache, dizziness and exhaustion.”

Gerlitz has now tested positive for the variant herself, and her four-year-old daughter is showing symptoms, and while Gerlitz is experiencing more serious symptoms than her son did, she’s not too worried about it.

“I started developing symptoms on Tuesday this week, and come Tuesday night, I felt like I had been hit by a truck,” she said. “It was like a normal flu feeling, like a normal influenza feeling — you got the aches, you got a fever, you’re not hungry and all you want to do is sleep,” she said. “You’re shaky, you can’t warm up. Just that feeling, I mean, I’m slowly getting better, but I have also been taking some Tylenol.”

The isolation protocol for variants is a 10-day quarantine period for the affected person, followed by another 14 days for everyone else in the household.

Gerlitz has been lucky enough to qualify for federal benefits, while Bellefeuille is a shift worker at Al-Pac, and has been able to take the time off that he requires.

No one will be going to work until at least April 24, but the whole scenario is wearing thin for both of them.

“The positive cases only need to isolate for 10 days and they’re done, and the negative people have to go for a second test and then isolate for an additional 14 days, and it makes no sense, you would think the positive cases, would be the ones that would have to quarantine longer to make sure they’re clear,” said Bellefeuille. “Once I get two tests that are negative, why can’t I be free?”

Bellefeuille has not been satisfied with how the last year has went regarding the virus, and questions many of the restrictions that have been put in place.

“They’re changing the rules as they go, which is semi-understandable because they don’t even know what to really do yet,” he went on to say. “At the same time, in my opinion, they’re just winging it, and a lot of decisions have been wrong in my opinion.”

“I don’t get the whole mask wearing thing, because clearly, it doesn’t work if Edwin Parr had a huge outbreak and all those kids wear masks, and the staff, as well as kids aren’t supposed to catch it, nor are they supposed to transmit it,” she said.

“It’s all a bunch of BS, really, it is, in my opinion. Yes, there’s a virus out here but they’re making it seem to be more than it actually is.

With that firsthand experience, Gerlitz is making her own rules on her own property.

“Nobody wears a mask at home, we don’t mask at home, I’m not, my son doesn’t isolate in his room, because that’s going to mess with his mental health. AHS told me to use a paper plate and slide it under his door … Go fly a kite,” she said.

“You can medicate yourself at home, just like you would with the flu — lots of fluids, rest and medication, if you need it … If this is all COVID is, I’ll take it.”

It’s time for everyone to get on with their lives, says Gerlitz.

“In my opinion, I don’t think it’s as bad as what they’re making it, this is not a pandemic. But now numbers that they have produced for the public to see, and everything that they have on social media, it’s garbage.”

COVID-19 cases within County of Barrhead more than double within three days
Apr 10, 2021 8:00 AM
Comments