County of Barrhead public works Supt. Ken Hove said the roads must dry out before grading is effective
Jul 15, 2020 11:12 AM By: Barry Kerton 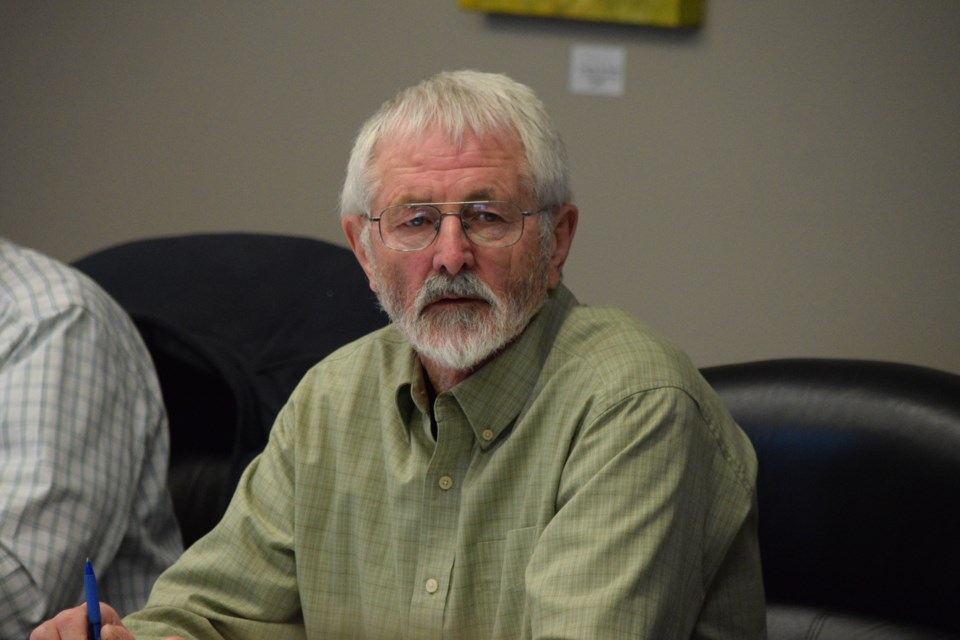 Coun. Walter Preugschas asked whether it would be possible to extend the shifts of grader operators when weather conditions were favourable to help catch up on road maintenance.

BARRHEAD-For the second straight meeting County of Barrhead public works Supt. Ken Hove, was in the hot seat answering questions about what he and his department could do about the state of some of the municipality's roads. To be more precise, the condition of many of the roads in deputy reeve's Dennis Nanninga's area of Division 7 (Neerlandia/Vega) and Coun. Walter Preugschas' area of Division 6, which incorporates the areas such as Bloomsbury, Tiger Lily and Camp Creek.

Unfortunately, Hove's answer during the July 7 meeting conducted via video conference remained the same as it did two weeks prior, which is not much.

"At least until the roads dry out more and have a chance to heal," he said.

Preugschas said he realized the wet weather was hampering public works' efforts in grading the roads, many of which have severe ruts created by large and heavy farm equipment but asked if they couldn't compensate by lengthening the road maintenance operators shifts.

"Farmers are always asking me if in wet years like this if we could not extend the working hours of the construction crews? How long do they work now?" he asked.

Hove said grader operators and the like typically work 10-hour shifts on weekdays and that they usually have weekends off.

"If we get into a bind, crews do work weekends, but the problem with that is that they don't have all the support they need as the public works office would be closed," he said.

Hove added it isn't as easy as adding or lengthening shifts saying the weather and road conditions have to be favourable and that is something that hasn't happened.

He also said there were budgetary constraints as well, noting if grader operators shift lengths were increased they would be potentially faced with a large over-time bill.

Nanninga while he understands that Hove is trying to get the best bang for the buck and restrict the number of overtime hours, but suggested it might be a good use of resources, adding he has been inundated with calls from his constituents complaining about the state of the roads.

"When the weather starts to dry up there are a lot of roads that need to get looked after so would it not make sense to put in more time when the getting is good," he asked. "There are lights on graders, are they not? So wouldn't it make sense to pay some overtime?"

Hove agreed to a point but reiterated it isn't that simple. He added that due to soil conditions Division 7 roads are more susceptible to rain than other areas.

"It only takes one day of rain to undo all the blading work that we have done," he said. "So when the weather is like it is now and it rains every two or three days, each time we are starting from scratch."

Complicating matters Hove said is that even after it the rain has stopped, many roads need two or three days to dry out before a grader can be sent out.

"It might look like the road is dry, but as soon as you rub off the surface material and on the shoulders, you are back in the mud. A road needs a few days to heal before a grader is sent out, if you do it too early you are just going to damage it even more," he said.

Hove added due to the base material in many of the roads in Division 7, the only longterm solution is to start from scratch and reconstruct or build a new road.

"There is black dirt and yellow clay in the roads [in Division 7]," he said. "It just absorbs and pulls the moisture in. The only thing you can do is wait until they dry out and tighten up."

Nor is the County of Barrhead the only municipality suffering from poor road conditions. Earlier in the meeting, Rural Municipality Association president Al Kemmere told councillors.

"It has been an interesting year for roads for many of our members causing significant challenges due to the when and the way the frost left the ground followed by a lot of moisture," he said.

The waste lagoon in Dunstable days are numbered unless the municipality can get permission from Alberta Parks and Environment (AEP) to discharge some of the effluent.

"If we are not successful, we may have to shut down the lagoon at the end of the season," Hove said.

However, county manager Debbie Oyarzun said she is confident they will be given permission.

"We had to do a release last year, so [AEP] have all our paperwork and we don't anticipate a problem," she said

Coun. Darrell Troock asked why the lagoon was closing in on capacity, adding a few years ago they had an issue with septic trucks based in Lac Ste. Anne County and Lac La Nonne dumping their loads at Dunstable and wondered if that was the reason why.

Hove and Oyarzun said it was a combination of increased usage due to area growth and the amount of rain the area received.

"[The lagoon] depends on evaporation to get rid of a lot of the liquid and when we continue to get rain every other day, that is not happening," Hove said.

Alberta sees dip in COVID-19 cases: Hinshaw
Aug 4, 2020 3:30 PM
Comments
We welcome your feedback and encourage you to share your thoughts. We ask that you be respectful of others and their points of view, refrain from personal attacks and stay on topic. To learn about our commenting policies and how we moderate, please read our Community Guidelines.