Summer vaccination expected to be available for most Albertans: Kenney

“By the summer, we plan to begin phase three, where (the) vaccine will offered to all Albertans. That means it will be months before vaccines will be available to the general population,” Kenney said.
Dec 3, 2020 11:45 AM By: Jennifer Henderson, Local Journalism Initiative reporter 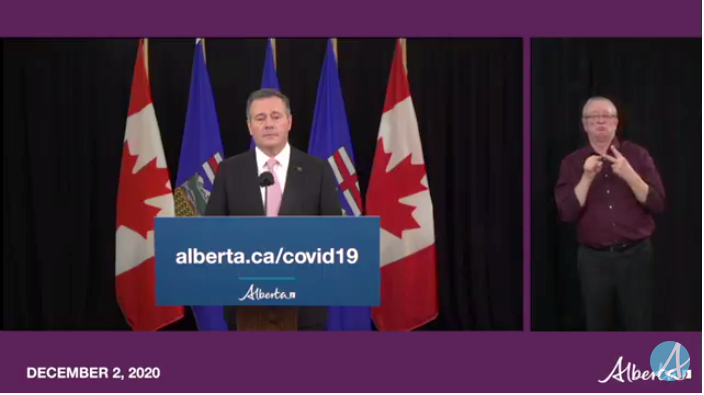 Alberta is preparing to vaccinate priority groups in the province in the first three months of 2021, while the general population will have access to a vaccine by the summer.

On Wednesday, Alberta Premier Jason Kenney announced at-risk and priority groups will receive the first doses - roughly 435,000 Albertans, or 10 per cent of the population.

The first Albertans to get the vaccine will be residents and staff of long-term care and designated supportive living facilities, on-reserve First Nations over the age of 65, seniors aged 75 and older and health care workers needed to ensure workforce capacity and likely to transmit COVID-19 to those at greatest risk.

“Part of (Wynnyk's) job will be to identify priority groups for phase two,” Kenney said.

The third wave of vaccines will be for the general public, and Kenney predicts those won’t be rolling out until the summer.

“By the summer, we plan to begin phase three, where (the) vaccine will offered to all Albertans. That means it will be months before vaccines will be available to the general population,” Kenney said.

“This is the unfortunate reality that Canadians face and people around the world."

The premier said hospitalizations will go down once priority groups start to get vaccinated, but Albertans will need to continue to follow public health guidelines even after the first wave of vaccinations have occurred.

Kenney said he isn't sure when life will get back to pre-pandemic normal, but the provincial risk will lessen once the first two phases of vaccinations are distributed. He added Albertans shouldn't count their chickens before they hatch.

“We are ready for the vaccine and we have a plan to get it out to you as quickly and as safely as possible,” Kenney said.

The province is gearing up to distribute the Pfizer and Moderna vaccines to the population.

The Pfizer vaccine can be only distributed by three out of the 13 vaccine depots, because the product has to be stored at -80 C, but the province is currently working on expanding the storage capacity.

Wynnyk said AHS is working to ensure ground transport is available to transport the vaccine at such low temperatures.

Both vaccines have been proven to be more than 90 per cent effective.

Kenney said the timelines proposed could be subject to changes, based on factors like other vaccines being approved or delays due to global demand and logistical complexity.

The premier noted vaccines will not be mandatory for Albertans. Kenney plans to get vaccinated himself and strongly urged other Albertans to do the same.

“We don’t live in a country where the government can inject you with something against your will,” Kenney said, adding they will be amending the Public Health Act to remove the power of mandatory inoculation that has existed in law since 1910.

On Wednesday the province announced another 1,685 cases of COVID-19, with 504 people in the hospital. Ninety-seven of those people are in the ICU and 10 more Albertans have died.

There are currently 17,144 active cases in the province.

New framework to identify benchmarks for when restrictions can be lifted is coming
Jan 27, 2021 7:15 PM