“We need to be able to come together and speak and share issues, share information, educate and bring awareness. Hopefully, that changes attitudes."
May 5, 2021 10:15 AM By: Chelsea Kemp 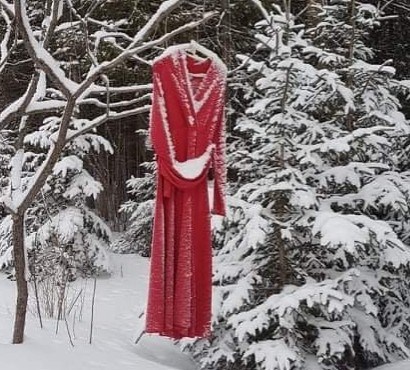 The Red Dress Project is meant to evoke emotion and bring awareness to the crisis of missing and murdered Indigenous women and girls in Canada. File Photo

“With such an increase of missing and murdered people in our community, we saw the need,” Teresa said. “Especially now with the pandemic— We see the need for more awareness, more healing, more grief and loss, more supports.”

The COVID-safe events begin with a vigil in Morley at 11 a.m. followed by a drive-thru event at St. Andrew's Church from Noon to 2:30 p.m. In Calgary, McDougall United Church will be hosting a walk-thru event at 1 p.m., Regional United Church will be hosting a gathering at 2 p.m. and an online screening of the movie Highway of Tears will take place at 7 p.m.

The event marks the first official Red Dress Day in Cochrane, Teresa said, and it is exciting because it was made possible through a collaboration with Stoney Nakoda First Nation members and Cochrane residents.

In Morley red dresses will be placed along Highway 1A. A red shirt will also be placed to honour missing and murdered Indigenous men.

The Cochrane drive-thru will feature red dresses hanging outside and will provide knowledge, including information on Stoney Nakoda First Nation members who are missing or murdered, at different stations.

The hope is to spark a dialogue and share information to combat stereotypes, ignorance and hatred Indigenous people can face, Teresa said.

“We need to be able to come together and speak and share issues, share information, educate and bring awareness. Hopefully, that changes attitudes,” Teresa said.

As part of the events on Red Dress Day, an emphasis will be placed on the document Reclaiming Power and Place: The Final Report of the National Inquiry into Missing and Murdered Indigenous Women and Girls and calls to action.

There are believed to be between 2,500 and 4,000 Missing and Murdered Indigenous Women and Girls across Canada. Reclaiming Power and Place characterized the crisis as a "genocide” in the country based on the amount of race-based violence Indigenous people, especially women, have experienced in Canada.

Red Dress Day was originally established by Indigenous artist Jamie Black to bring awareness to the violence Indigenous women face. Black began the tradition with an art installation in Winnipeg that saw red dresses hung as a reminder of those who have gone missing because of domestic and sexual violence.

The day serves to honour the memory of those who are missing and murdered and show action is being taken to address the crisis.

The Stoney Nakoda First Nation and the surrounding area have been heavily impacted by missing and murdered people, she said.

Abuse and violence toward Indigenous peoples, especially women and girls, has been normalized, she said.

This experience is magnified for many Indigenous people because of the dangerous stereotypes and systemic racism they can face when visiting neighbouring communities like Cochrane.

“We have resilience and we can work together toward managing and coping in this time,” Teresa said. “Always be kind to people. Treat them how you want to be treated. You never know what somebody is going through.”

The issue is pervasive and every day Nation members are haunted by losses they have faced.

It affects everyone from elders to youth in the community, Gloria said, and it is important to seek healing and solace while pushing for change, support and counselling for people in need.

The Red Dress is a symbol commemorating missing and murdered Indigenous women and girls, Gloria said, and can serve as inspiration for conversations about initiatives that can take place to combat the crisis.

“We know the inquiries have been done. Now that we know there are recommendations. What are we going to do going forward— Demand action,” Gloria said. “That’s very important for our families still, there needs to be a movement for their murdered and missing.”

Gloria and Teresa are part of the group Mmiwg2s & MMIP Cochrane. Group members are united in raising awareness for missing and murdered Indigenous women, girls and two-spirited people. They are advocating for action in their names and memories.

“It’s an issue that’s important but it hasn’t been given a lot of voice. That’s what we hope to share with people and create that awareness and let the people speak,” Gloria said.

She encourages people to reach out share their stories, raise awareness and advocate. The project intends to reflect and honour the lives that have been lost.