'The value of your elders': First Nation using youth to spread COVID-19 message

MORLEY, Alta. — A First Nation in Alberta is turning to its youth to help spread the message to older members about the dangers of COVID-19.
Dec 29, 2020 10:15 AM By: Canadian Press 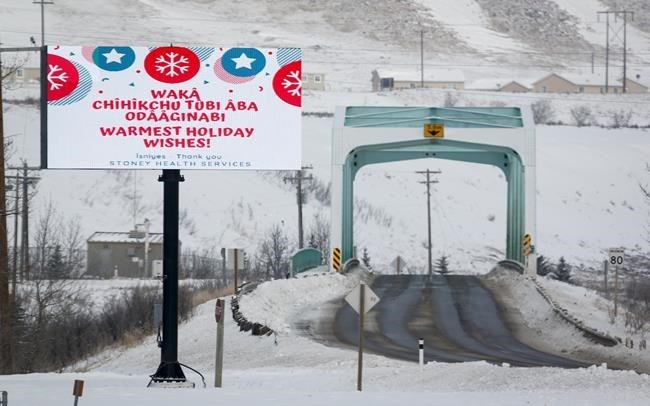 MORLEY, Alta. — A First Nation in Alberta is turning to its youth to help spread the message to older members about the dangers of COVID-19.

Three reserves in the shadow of the Rocky Mountains make up the Stoney Nakoda First Nation, where there have been only a couple of outbreaks of the novel coronavirus since the pandemic began.

CEO Ryan Robb said the First Nation, including Morley about 70 kilometres west of Calgary, has faced a difficult challenge. Stoney remains the first language for an overwhelming majority of members, regardless of their age.

"They have an extremely high language retention, even though we're very, very close to a major city," said Robb in an interview. "Quite quickly we realized we needed to get our information out in Stoney as well as English."

Audio files have also been created that can be downloaded onto phones.

"We made it in a very simple, small, downloadable file," Robb said. "We translated it into Stoney and I can take my phone to go see my grandmother to play it in Stoney, so she may understand."

Robb said a lot of messaging is being delivered in schools to get young people onside over fear of harming their grandparents.

"Make sure you're protecting grandma and grandpa. The value of your elders is really important for First Nations," he said.

Robb said as in many ethnic communities, multiple generations live together in small homes, so containing the spread of the virus is essential.

"We have 1,100 households on the three reserves. How are we managing to keep this into four or five houses rather than just running rampant through the entire reserve?"

The Alberta government has recognized that many COVID-19 hot spots in the province share similar circumstances with First Nations, so outreach teams are going into communities to get the message and resources out.

"Many of these families also have English language barriers, which in some cases makes it more difficult for them to obtain current and accurate health information and to access the social supports that are available to them."

Conly, who has had more than 100 patients with COVID-19, said he's not surprised at the measures being taken to get out vital information.

"We see that in many of our new immigrant settings as well. We've got Punjabi, Vietnamese, Mandarin, Cantonese and Spanish, even in Calgary," he said.

"Some COVID materials they have to put in eight to 10 languages, because there are many people who may have some fluency in English, but when it gets to be more sophisticated, their first tongue is always their best delivery in terms of information."

This report by The Canadian Press was first published December 28, 2020

COVID vaccinations begin on Alberta First Nations amid rising numbers and states of emergencies
Jan 19, 2021 9:45 AM