A lifetime dedicated to medicine

Dr. Guy Gokiert, who's been heavily involved in Senior's Week, looks back on his career
Jun 10, 2021 1:00 PM By: Andreea Resmerita 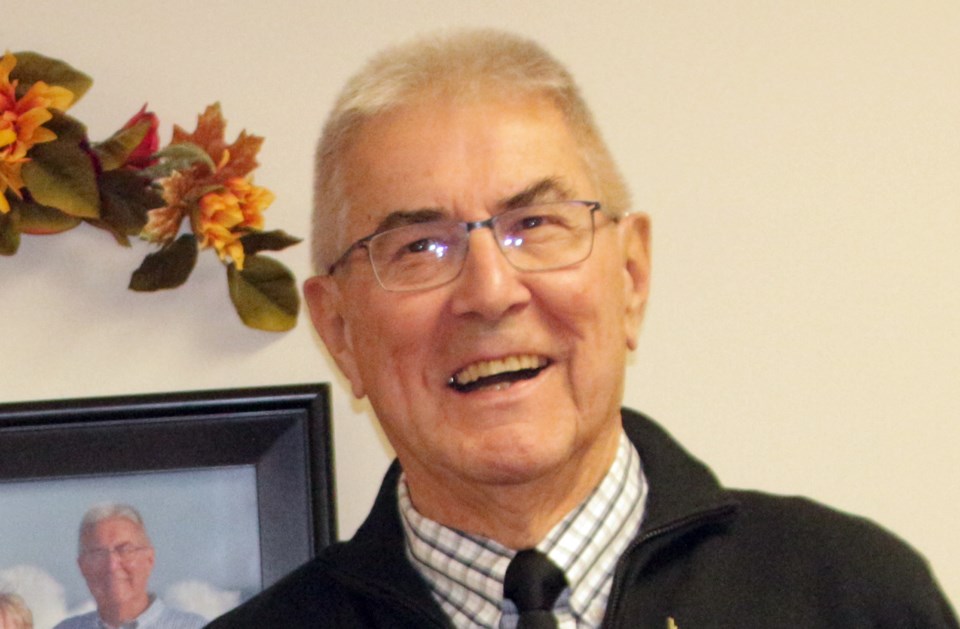 WESTLOCK — For the past three years, at the helm of Seniors’ Week planning has been a very familiar face for the Westlock community.

A native of Manitoba, Dr. Guy Gokiert was transplanted at an early age to the west side of Edmonton, when his father made a choice: either move to Alberta to work on the Alaska Highway, or move to Ontario to work in a steel mill.

In an interview with the Westlock News June 4, Gokiert said he always wanted to be a doctor.

“You don’t really have to be that smart to be in medicine,” Gokiert said, “you just have to be committed,” although that likely sounds more modest than true.

He got into medical school at the University of Alberta in 1959 — pre-degrees were not required then — a class that only had five women, and one Asian person. The selection criteria differed too:

“I have heard by the various grapevines that at that time, they selected you because of your ethnicity. They wanted so many Ukrainians, and they thought that I was probably French with the spelling of my name. It’s a southern German name that was transferred to Poland, and then my grandparents immigrated to Canada in the late 1890s.”

It’s still a story that most doctors can recognize: after he graduated in 1965, Gokiert did a one-year internship in Montreal, then chose between three available jobs in Westlock, Saskatchewan and Whitehorse.

He picked the general medicine job at Whissell Clinic.

“When you’re growing up and you have all these various careers that you think you’re going to do, and I thought I wanted to be a pediatrician or a hematologist.” He spent two years at the University of Alberta studying pediatrics, and “didn’t really like it,” so he returned to Westlock.

"In this day and age, people are flying around Canada and trying to get interviews at various places. All I did was I went into the university and I talked to some of the professors there. I said ‘I want to go into pediatrics,’ they said ‘When can you come?’”

“My wife has said at one time that they should cut off my right arm because every time, because any time anybody suggested something, my right arm would shoot up and I'd say ‘Well, I’ll volunteer.’"

The politics of the Klein days took a lot of time, and that meant half-days in Edmonton for meetings, half-days at the clinic in Westlock, and other doctors looking out for Gokiert’s patients when he was away.

“Some days I'd come back home and we’d have an emergency operation of some sort. After coming home from Ottawa, I'd try to go to bed and all of a sudden they’d phone you and say ‘We’re going to do an appendix (surgery)’ at 1 a.m.”

So far, this sounds like a chronology, proof of a stellar memory, but it’s also a reminder that Gokiert has lived through decades of change, including in the makeup and requirements of medical degrees and specializations.

He agrees that rural medicine has remained the same though: “a very difficult job if you’re going to try to do it as efficiently and as effectively as you can.”

Rounds at the hospital start at 7 a.m., an hour before the operating room opens at 8 a.m. Emergency room patients get squeezed in in between, before lunch it’s clinic patients through the afternoon, and evenings are for on-call surgeries, missed dinners and cold food.

Professionally, Gokiert’s story is a testament to himself. His family, however, is as much a product of the Gokierts as they are of the community where they were raised: Chris, David and Jennifer are the three people Gokiert spent most of his time talking about.

All three are professionals in their own right, who have since moved away to Calgary and Kelowna, B.C. to start their own businesses or run others.

The Gokierts are also grandparents, and between an extended family, rounds of golf as befitting of retirement, and film recommendations, Guy takes care of Seniors’ Week.

“We were instrumental with (Town of Westlock Coun. Murtaza) Jamaly to start a group that was concerned about seniors in Westlock and district. From there, we started looking at how to involve ourselves in Seniors’ Week. One year pre-COVID, I was the chair of Seniors’ Week.”

That year, in 2019, they put together a seniors’ conference in the summer, at an almost-packed Memorial Hall.

“Then COVID hit and everything went sideways,” Gokiert says, offering a movie reference which he followed with a second recommendation: the film Indian Horse, about residential schools in Canada.