Accounting for the last 42 years

Plant Accounting Services thank employees and clients for decades of loyalty as new firm moves in
0
Feb 8, 2020 7:19 AM By: Chris Zwick 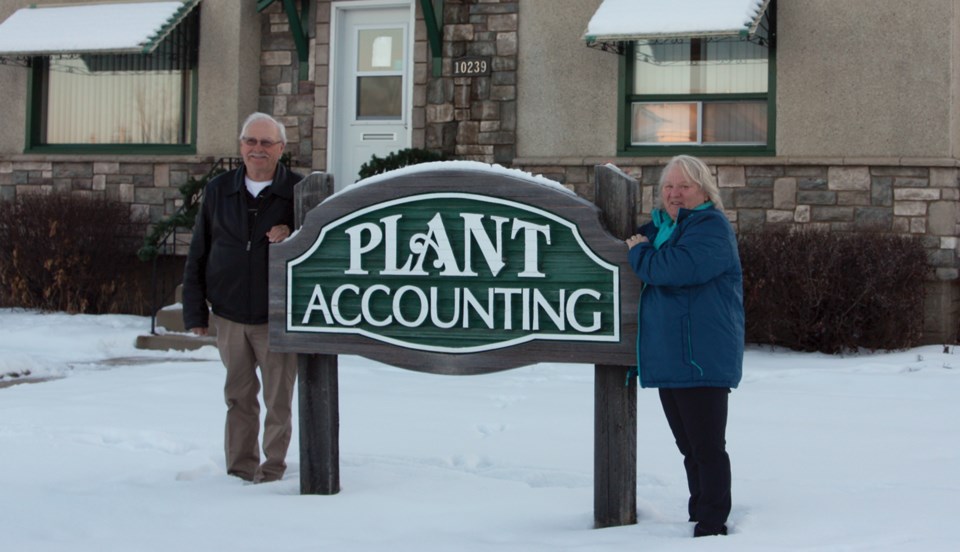 Glenn and Joanne Plant have sold their accounting firm, Plant Accounting, and retired after 42 years in Westlock. New owner Darren Fawns has kept all four employees on board with the new company and is looking forward to serving the Plant’s longtime clientele.

WESTLOCK - After doing business for a certain amount of time in the same community, you become part of the fabric of that community and by the end of a career, if you’ve done things right, it’s not unusual to be providing your services to a second or even a third generation of faithful customers.

That’s exactly the scenario for Glenn and Joanne Plant, who, since 1978, have provided accounting services for the residents of the Westlock area and after having had thousands and thousands of tax forms come across their desks, they have now sold their business, Plant Accounting Services, and officially retired in December.

“We have a new job, we spread golf balls on the golf courses down here,” said Joanne, over the phone from the couple’s Arizona winter home last week.

The couple met in the mid-1970s working at the same firm together. They soon married and in 1978 set up shop in Westlock and haven’t looked back since.

“We worked for the same company and when we decided it was time to venture out on our own, we were either going to go to Red Deer or Westlock. Neither one of us were city people … and we were expecting our first child at the time,” Joanne said, adding that son Kevin still works there under the new owner.

It has been a month since they sold and so far they’re not missing the work. It is somewhat bittersweet though as they leave behind their long-time employees, whom Joanne thanked profusely for their years of service to the firm.

Louise St. Louis, Linda Grove, Kevin Plant and Sarah Hensch will continue working for the new owner at the newly christened G. Darren Fawns Professional Corporation, which is in the same location on 104 Ave. along the east side of Highway 44.

“Darren is a good person and he’s looking forward to taking over our clients and expanding as well … So far our staff and clients and him seem to be melding,” said Joanne.

Darren Fawns has been in the accounting business for about 13 years, working in public practice in Edmonton. He has been a designated accountant for a decade, but decided it was time to stop making money for someone else and start making it for himself.

“I’ve been looking to buy a firm for a couple of years now and they don’t come up very often and the competition for them is usually pretty stiff. I got one relatively close and it was the right size of firm, so I didn’t have to jump in and drown myself,” he said.

Fawns is also looking to expand the business and offer even more services.

“It has been fairly smooth so far.”

While it’s not always glamorous work, and sometimes Canada Revenue Agency doesn’t make it very fun or easy, Joanne says she will still have some good memories to hold on to.

“We have super, super great clients and I enjoyed working with them and solving problems that our clients had in the past. Those are memories that you’ll never forget. We have clients where we’ve had two or three or fourth generations in the same family,” she said.

“It was great, but I certainly won’t miss working with CRA.”