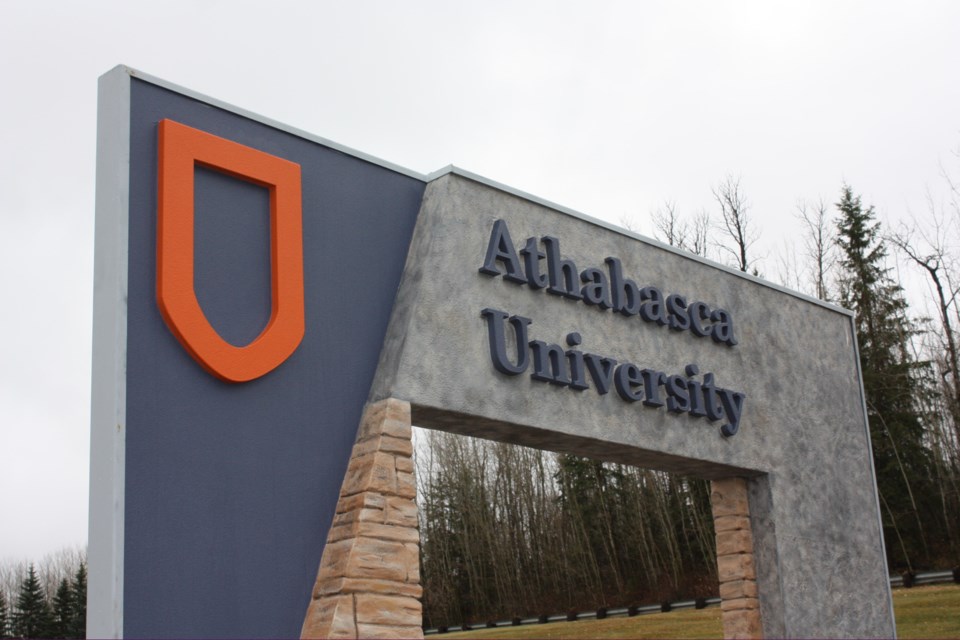 Athabasca University recently changed its designation policy and three unions representing workers at the institution are concerned it may lead to sweeping changes that will negatively impact the labour force. File

ATHABASCA — ‘If it ain’t broke, don’t fix it’ — it's a rule many live by, but a sweeping change to a designation policy at Athabasca University has one union worried and two others scratching their heads.

In December 2019, the AU Board of Governors announced it was going to review the designation policy that specifically impacts the Athabasca University Faculty Association (AUFA) and invited input from AUFA and staff in the two other unions at AU — the Alberta Union of Provincial Employees (AUPE) and the Canadian Union of Public Employees (CUPE).

AUFA, and other faculty associations, are created under the Post-Secondary Learning Act which is the legislation that allows post-secondary institutions to exist. Under the act, faculty association membership is determined by the board of governors whereas membership in AUPE, CUPE or other unions is determined by employees wanting to be part of a union.

Another difference to a faculty association is that until 2017 they were not covered under labour law. The NDP changed that after a Supreme Court of Canada ruling in Saskatchewan said the right to strike was inalienable. Ultimately, it means that while the board of governors still designates who is in AUFA, the members now have access to appeal under the Alberta Labour Board, but the clause will sunset in 2022 and allow AUFA to pick its own members.

“The idea here is that under the law, the board says this job is an academic therefore they are in the faculty association and AUFA's in a unique position because half of our members are not professors,” said David Powell, president of AUFA. “So, I am designated as an academic, even though I do not teach for a living. This is because designated academic — and this is where it gets into a lot of the weeds of what the employer is doing — is a labour relations term. It's an academic union, but you can basically put who you want in it is what past practice has shown.”

Until Sept. 11, the policy was considered clear and straightforward Powell said; that all professionals and academics are in AUFA excluding senior managers and human relations (HR).

With the policy change policy, there is the potential that AUFA could lose up to two-thirds of its membership, raising concerns specifically for AUFA, and by proximity, for AUPE and CUPE.

Consultations between the two sides went on for about 20 hours, but it was a conversation Powell called "shallow" as some topics remained undiscussed.

“And a key thing here has been that they have refused to say who will actually be removed by this. When we asked them, 'Why are you removing professionals?' Their response was, ‘We don't know if we're removing professionals or not. We're just writing criteria and then we'll see what happens once the policy is implemented.’”

It's a concern CUPE Local 3911 co-chair Dr. Mark Dimirsky likened to signing a blank piece of paper with only the assurance AU would not revise a policy without knowing the consequences.

“Our response was kind of like a head scratching on it like, 'OK how does this relate to us?' And then as we became involved in trying to understand what the issues were, it became clear that what the university was proposing was to create a policy with unknown consequences,” Dimirsky said. "And so, we're scratching our heads and saying that it feels a little bit like we're being asked to sign a document without reading it. Who would sign the contract that says, I agree, but I don't really know what I'm agreeing to?”

What happens to AUFA will impact the other two unions he said because of changes to working relationships as well as potential effects on providing services to students.

"What happens to them has a ripple effect on us in a couple of different ways so, for us, this was a labour issue because there are going to be changes in our working relationships, not just with the university, but with other labour unions, other bargaining units,” said Dimirsky. “And it was also going to be an issue that had an impact on the likely educational satisfaction that our students would have with their AU experiences.”

While AU denies the intent is to break up AUFA it says the review to the policy required “immediate attention” and that there was significant input from the three unions.

“It had been 17 years since this particular policy was last reviewed and 37 years since its implementation, so the university engaged in a comprehensive review and, where appropriate, made necessary revisions,” said AU’s chief human resource officer Charlene Polege in an e-mail to the Advocate. “The university spent nine months consulting directly with its union partners on this new policy's language and content. Changes to the policy were made based on substantive input from our union partners. The university believes the changes made reflect both the university's position and feedback received from its union partners during the consultation process.”

None of the unions deny it was a nine-month long process — they disagree that their input was heard or considered.

"The potential risks to members were concerning and perceived to be an attempt to bust the AUFA union,” she said. "My questions were never addressed: How did they envision that the changes to the policy would be an improvement in our learning environment and beneficial to Athabasca University? How did it fit into Athabasca University’s mission? At no point were we allowed to discuss the outcome of the policy.”

Dimirsky and Powell both agree with that characterization.

“All three unions believe the consultation process was faulty. Our repeated attempts to dialogue to understand the need for changes to the current policy were met with AU responses that did not inform us,” Dimirsky wrote in a letter sent to Local 3911 members.

“We agree there were many opportunities to discuss the issues, but we believe AU did not engage with the unions to reach consensus. All unions agree that we heard what to us were non-answers to our questions.”

AUFA has already held an information picket and asked other faculty associations to recommend a boycott of AU for transfer credit.

“AU relies heavily on transfer credit from other universities for its financial viability,” Powell said, pointing out 11 faculty associations from universities across Canada from Western University in London, Ont., to the University of Victoria.

Polege assured that AU will consult in good faith if and when AU decides to implement the policy.

“The university has and continues to honour its obligations to consult in good faith during the review process and on a go-forward basis if and when it chooses to apply the new policy. At this time, no decisions or changes have been made with respect to the designation of any employees at AU,” she said.

AUFA however does not feel its members have been heard by the board of governors, so on Oct. 9, a letter to AU was submitted, asking for a stop on any involuntary changes to AUFA and offered to withdraw the transfer credit boycott and stop holding information pickets in return.

“We offered them a letter, which would be a moratorium on involuntary designation changes for five years, and they accepted the letter but didn't really have too much of a response to it. So, we asked them to respond in two weeks,” Powell said. “The text of the letter says, more or less, for five years any changes to the makeup of AUFA must be done with the consent of AUFA, which will include incoming staff who would normally be in AUFA according to our current makeup.”