AU to Light the Night June 25 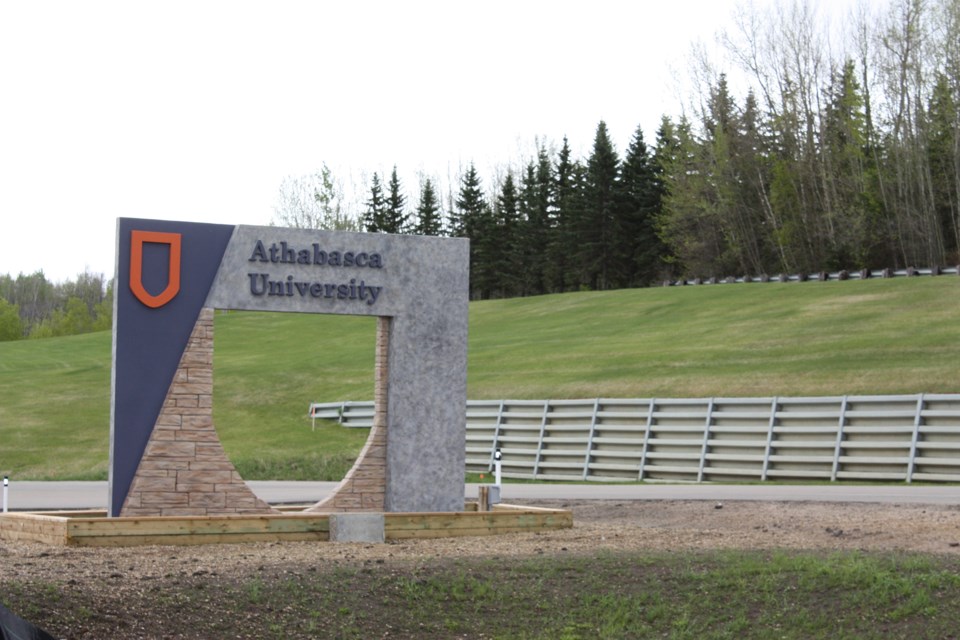 Athabasca University will be celebrating its 50 anniversary June 25 with a drive-by light show at the Athabasca campus from 8:30 p.m. to 11:30 p.m. The Calgary Tower and High Level Bridge in Edmonton will also be lit up with the university’s orange and blue colour scheme to recognize the milestone.  File

ATHABASCA - Milestones need to be acknowledged, and celebrated.

It has been 50 years since Athabasca’s namesake university started offering distance learning opportunities. That’s a big deal, and a worldwide pandemic isn’t going to stand in the way of celebrating in one way or another.

A campus-wide drive-thru light show is planned for the twilight hours of June 25, from 8:30 p.m. to 11:30 p.m. and the community is encouraged to stop by for a short drive.

"It's a give-back to the community to say thank you for welcoming us and it's basically a different kind of drive-by birthday party," said Athabasca University events coordinator Jody Paulson. "This is all about community engagement and giving back and let's celebrate it. We're proud that we're out there (and) we're investing our time and energy in where we live in Athabasca; we're spending the time and energy in the community where we live."

When planning for the celebration started more than a year ago, the initial thought was to have a festival-like atmosphere with live entertainment, food, drinks and fun, but the coronavirus pandemic and the subsequent safety precautions that must be taken, resulted in a re-imagined celebration organizers are calling Light the Night.

"Along University Drive there'll be some lighting and then they'll turn onto the grounds. The lighting activations will be trees and our own buildings and then we have this one beautiful, big metal art piece just outside of ARC (Academic Research Centre),” said Paulson. “Then we'll have a swag giveaway (and) we're going to have a giant LED wall that will have some video components to it, and then we have a Beyond 50 installation.

Athabasca University’s orange and blue will light up the night in Edmonton and Calgary as well, said Paulson, as both cities are home to satellite offices of the university.

"We're just wanting to raise the profile, both the Calgary Tower and the High Level bridge are also going to be lit at the same time in those two cities with our school colours of blue and orange … this isn't the Oilers, this is about Athabasca University," Paulson said.

AU staff and team members will be there directing traffic and the parking lots will be blocked off, so as to discourage walkers. Paulson stressed this is a drive-thru event only. The Multiplex parking lot may be used as a staging area though.

The whole thing should only take about 10 minutes and there will also be gift bags at the end of it all, while supplies last, said Paulson.

County councillors were enthusiastic about the event and the future of AU in the region and agreed to pitch in $7,500 for the celebration at their June 9 meeting.

Athabasca town council was a little less enthusiastic at their June 16 meeting, but still decided to contribute $3,750.

The town had budgeted that amount for the pancake breakfast that was supposed to take place as part of convocation celebration, so the money was there, but mayor Colleen Powell was reluctant to go any higher.

“I would be willing to put some of that towards this. I think what the university wants is to see that we are supporting them, but I’m not willing to look at $7,500, that’s my opinion,” she said.

Coun. John Traynor agreed, but was sceptical a light show in the middle of June would even work, citing his experience projecting movies for the kids in his neighbourhood during the summer.

“It doesn’t really get dark until 10:30-11 o’clock at night, so I’m not sure on how they plan on doing the light show because people will have to go pretty late to enjoy them. I’m not sure it’s going to work, honestly,” he said.

Coun. Rob Balay noted it wasn’t council’s place to tell the university how to celebrate its anniversary and put forth the motion to contribute the $3,750 that was budgeted, with the clarification the money was for the overall 50th anniversary celebration and not necessarily the light show.