With Sobeys eliminating plastic bags it could cut down on some landfill problems, says Westlock official
0
Feb 10, 2020 7:00 AM By: Andreea Resmerita 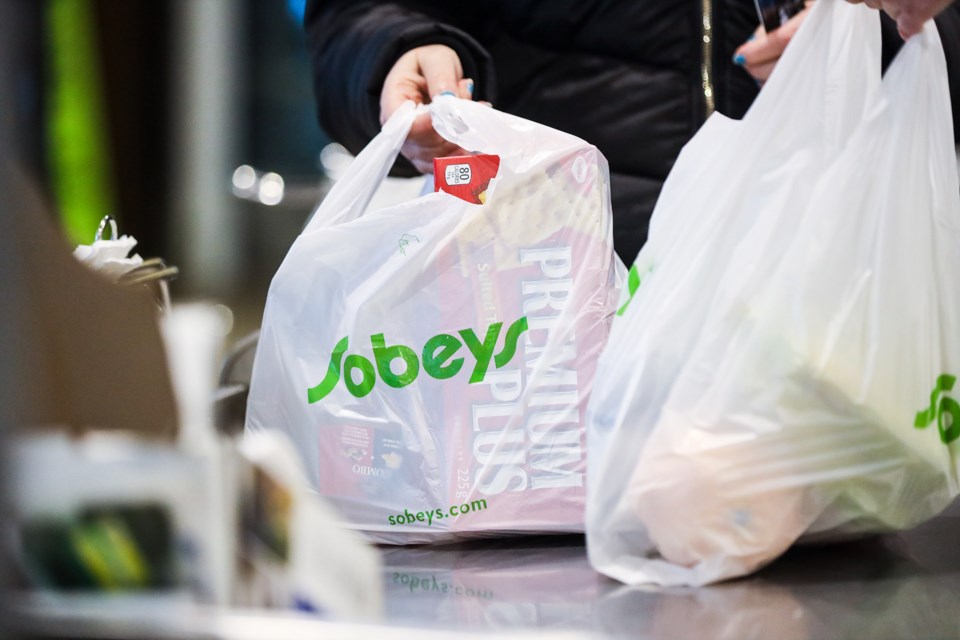 Starting Jan. 31, single-use plastic bags were removed from all 255 Sobeys stores across Canada — the company claims the move will take 225 million plastic grocery bags out of circulation yearly.

WESTLOCK - “If you go to every landfill across North America and ask them what the Top 5 challenges they have in managing and operating a facility, managing blowing waste is one of the top. If you ask them what the primary waste that’s getting blown around, it’s going to be plastic bags,” says Tom Moore.

Moore manages the Westlock Regional Waste Management Commission, and with the elimination of plastic bags from Sobeys grocery stores, he thinks it will do a lot in cutting down the source of the fly-away garbage.

Starting Jan. 31, single-use plastic bags were removed from all 255 Sobeys stores across Canada — the company claims the move will take 225 million plastic grocery bags out of circulation yearly.

However, the work in recycling and eliminating environmentally damaging plastics from daily use isn’t quite finished.

Plastic bags like the single-use grocery store ones are classified as plastic film in the waste management world. That includes plastic tarps, for example, or any other plastic that’s very thin.

At the Westlock Regional Landfill facility, the volume of plastic film is not significant, but the fact that it blows away is.

“In spring and summer, I have high staff dollars put towards picking up garbage not only on our facility, but on the surrounding properties around us. Blowing waste is a big issue.

“(Eliminating bags) helps us out tremendously on that aspect.”

Even reusing the plastic bags as garbage bags doesn’t prevent them from getting blown around once they get to the landfill.

How that plastic film ends up in the landfill in the first place has to do with the difficult process behind recycling those materials, and the market is very limited.

Because of the low volume of film going through the Westlock facility, it’s ineffective to invest in specialized equipment to process it.

“I would have to buy another $16,000 piece of equipment for, tonnage-wise, a very small amount of actual plastic. The cost benefit isn’t really there.”

Moreover, the few facilities that accept plastic film are very strict — Moore said they want it separated by colour, for example, but he doesn’t have enough staff on site to do the sorting.

All hard plastic gets processed at the facility, but film wraps around the blades and plugs the machine.

“I can landfill it cheaper than I can process it … Do I like doing that? No. But it’s $125 a tonne to get rid of it, and the small amount that there is, it’s just not cost effective to process it. I am trying, I care,” said Moore, but the constricting rules from processing facilities make it very difficult.

In the landfill proper, waste managers try to take up as little space as possible.

“If you have a lot of plastic film, part of what we’re trying to do is compact garbage in the landfill so we get as much as we can in what we call our ‘air space’ or a per cubic meter. Plastic film, we don’t get much of that into a cubic meter because it doesn’t pack at all.

Plastic has a memory. You pack it down and it’ll just kind of want to strike down back into whatever was there before. It’s a real struggle.”

The amount of plastic film that comes through the facility by weight is not significant enough to make this as big of an issue as the fact that it gets away from the landfill in the first place.

Still, the elimination of plastic bags in some grocery stores does cut away at the source of part of these problems. Moore figures it’s not about the cost either, since it can’t be that expensive to produce.

Plastic in general, however, is a deceiving category for wannabe recyclers.

“Just because it says plastic, it doesn’t mean it’s 100 per cent recyclable. It depends on where they’re made and how they’re made. They might have other components in it.”

There are seven levels of plastic, from the typical plastic bottle (Level 1) all the way to harder plastics for toys or car parts. One example Moore gives is bailing twine, which is common in farming communities.

“The twine itself is recyclable … but we can’t recycle the netting because it might have fiber glass in it, and it will contaminate the plastic facility so they can’t take it.”

For bailing twine, the facility has an ongoing recycling program and farmers are starting to deliver their twine to them since they were behind the program getting started in the first place.

But for the other plastics, there’s no way for waste management facilities to deal with plastics that have other materials mixed in them. Very few processing facilities take them, and if there aren’t any than they also end up in the landfill.

That’s definitely the case with electronics.

As for the plastic that can be processed, Moore grinds it on site. It was cheaper to process it at the facility than it was to turn it to the landfill — hard plastics, compared to the film counterparts, take up a lot of cubic meters since they get it in high volumes.

“We have three manufacturers here in Alberta that take my plastic. My plastic is clean because we hand-sort everything. They know that when they get my plastic, they can run it through … They make different boards and stuff like that out of recycled plastic.”

While there are options here in the province, Moore does say that reducing the amount of hard plastics should be a priority and eliminating single-use plastic bags is just one step.

“Think of how many TVs are out there that are made with hard plastic. The problem is, there’s not any control as to what they make that plastic with. It’s not a one-to-seven (level of plastic), there’s multiple things in it.”

At the Westlock facility, Moore focuses on plastic and cardboard recycling since they take up the most amount of space.

“This is mostly from people and companies realizing what we’re doing here,” and dropping off their recyclables.