Patients needing emergency care will be sent to other hospitals
Jun 6, 2021 12:42 PM By: Town And Country Today Staff 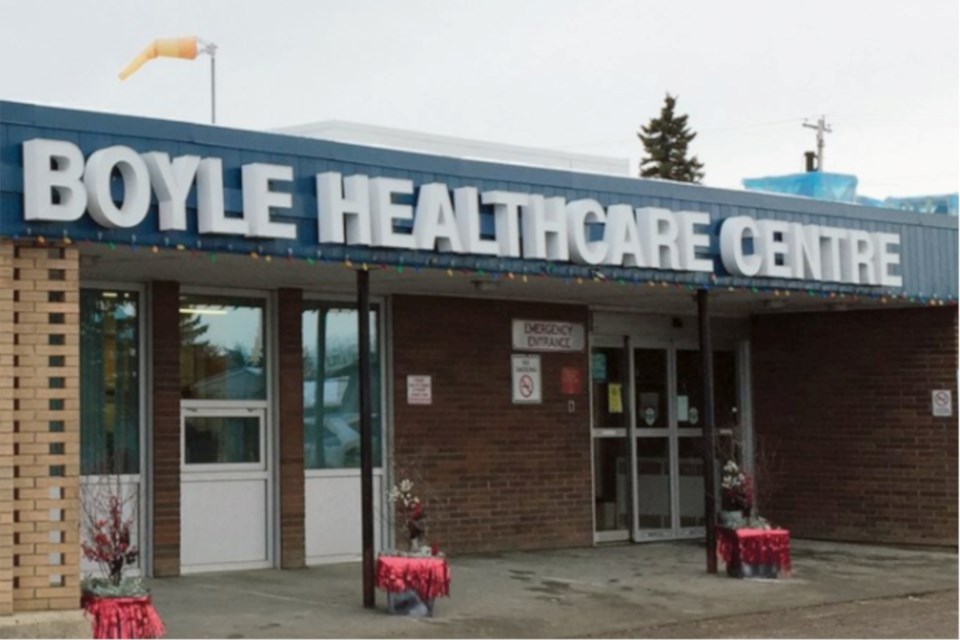 The emergency room at the Boyle Healthcare Centre will be closed for 24 hours starting June 7 at 8 a.m.File

BOYLE — The Boyle Healthcare Centre's emergency department will be temporarily closed Monday, due to a lack of on-site physician coverage.

A media release from Alberta Health Services (AHS) June 6 said the closure would last for 24 hours starting at 8 a.m. June 7.

“This is a temporary measure and AHS is working hard to ensure local residents continue to have access to the care they need during this time,” the release said.

Nursing staff will remain working to provide triage, assessments and will make referrals for patients to go to the emergency rooms in either Athabasca, 45 kilometres west, or Lac La Biche, 66 kilometres east of Boyle.

All emergency medical services (EMS) calls will also be re-routed to Athabasca or Lac La Biche.

“We are thankful for the support of surrounding healthcare centres and medical staff and would like to thank the community for their patience and understanding during this time,” the release went on to say.

Boyle area residents are reminded to call Health Link at 811, which is available 24/7 for non-emergency health-related questions.

The temporary closure comes just days after Village of Boyle's regular council meeting June 2, where mayor Colin Derko told councillors he had met with local doctor, Dr. Jan Fourie, earlier that day, and requested administration try to set up a Zoom meeting with Athabasca-Barrhead-Westlock MLA Glenn van Dijken as soon as he was available to meet.

“The reason I want to do that is that Dr. Fourie is a little more forceful and in your face than Dr. Doman and I think we maybe need that a little bit,” he said.

Healthcare in the village has a topic of discussion at the last few council meetings when it became clear Dr. Marthinus Doman was leaving the community after practicing there for 17 years.

Apparently, Derko said, the replacement doctor from South Africa is in Alberta, but has to complete a three-month practicum of sorts to familiarize himself with Canadian healthcare before practicing in Boyle. With Doman now gone, the village is left short a doctor — an unenviable position to be in when there are only usually two doctors in town, although locums are often there to try to keep services up.

During his conversation with Fourie, Derko said the doctor brought up a few very good points he wanted the MLA to hear directly from the doctor, so van Dijken could express the seriousness of the healthcare situation in the community to the government.

Derko paraphrased Fourie, saying if there are 400 doctors in Edmonton, and a new doctor has to be trained, they still have 399 doctors, but in Boyle, where it is common to have just two doctors in town at any one time, if one leaves, it causes a big problem.

“And we're going through all of this crap and they're holding (the replacement doctor) up, so (Dr. Fourie) said there's got to be a way to fast track and look at Boyle differently than Edmonton, and he's totally right,” said Derko, recognizing that the pandemic likely played a role as well. “I mean, those guys in Edmonton have other doctors and other alternatives, but we don't always have that in our community.”

He added he was impressed with Fourie’s willingness to go to bat for the community.

“I'm impressed with that and I'm happy about that because that means he cares not just about being a doctor, but having a doctor for his community.”

Coun. Barb Smith reiterated her desire to see the reformation of a healthcare committee, and a proactive focus on recruiting more doctors, and nurses, to the community.

“I think going forward, we can't really be depending on locums. I know there are a bunch of rural communities that are on their third and fourth 24 hours shut down on the hospital because they can't get anybody, so I mean we've been lucky to get our locums so far, but we can't guarantee that,” she said. “There's more than just this one doctor recruitment that we have to bring up, we have additional concerns and I'm hearing it all through the village, so it's not just me raising it, this is significant to the village.”

Derko said it’s an issue everywhere, and one van Dijken is well aware of and has been working on, as many of the doctors who came to rural communities from abroad years ago, are now getting to retirement age, and some are relocating back to their home countries, like Dr. Doman. Time is of the essence, he said.

Smith agreed, saying the time to act is now.

“All rural communities are going through this, so they're all going to be vying for additional doctors, additional nurses, additional technology, all of that stuff. I think we're behind the eight ball right now,” she said.