Chickens in the hamlets?

Westlock County councillors look at changing the land use bylaws to allow backyard hens
Jul 26, 2020 11:31 AM By: Andreea Resmerita 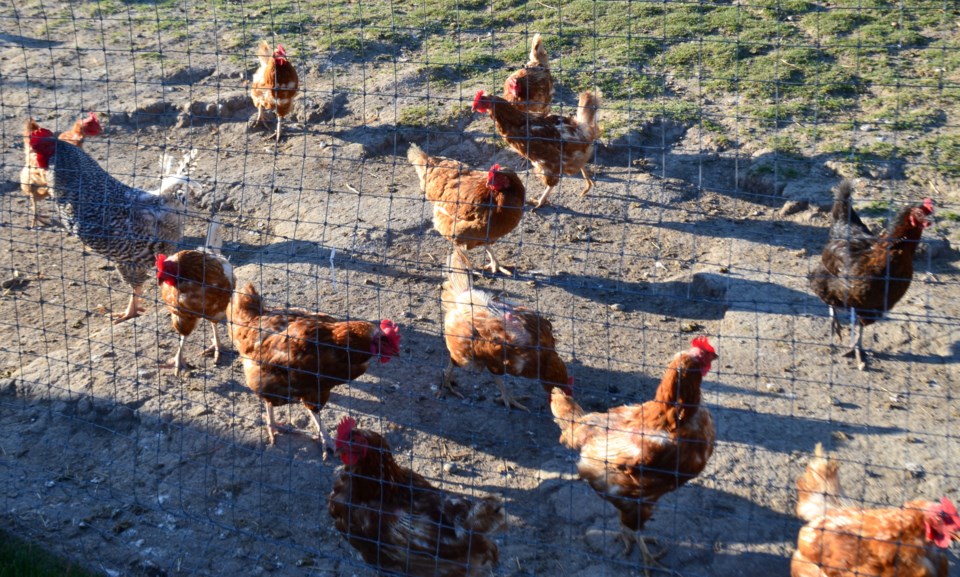 Westlock County had a very short discussion July 14 about backyard hens in the hamlets; a bylaw proposal from administration will be brought forward soon.

During a governance and priorities committee meeting July 14, council spent no more than 10 minutes on the issue, which administration noted was brought up by Coun. Victor Julyan.

This doesn’t seem as widespread in rural municipalities. Strutt cited Foothills County, where a survey determined that 77 per cent of residents were in favour of hens on residential county lots. Support was a little lower in hamlets, with 60 per cent in favour.

A public hearing was postponed due to COVID-19, and there’s no policy there yet.

Thorhild County councillors recently rejected a proposal from administration to allow chickens—the proposal was even reviewed by a University of Alberta professor.

“I asked (the administrator) why and she said just ‘Not everybody is in favour of it,’” said Strutt.

“But if we’d like to go this way, we could do a public hearing or a … community survey to see actually how many people would like (this).”

A similar proposal was also rejected by Strathcona County councillors. They cited potential infringement on chicken farmers in the area if people can keep their own hens, but the public was less pleased with that explanation.

The sentiment was rather different among Westlock County councillors; they’d like to see a draft bylaw with some commentary on what raising chickens would look like in the hamlets.

“If people want to do this now … have their own eggs, their own gardens, I don’t think it’s harmful, if it’s done properly like anything else. I see no harm,” said Coun. Jared Stitsen.

Reeve Lou Hall also thinks it’s a great idea but with one caveat: no roosters.

Julyan, the initiator of the backyard hen project, does want to see a restriction on the number of chickens a person can keep. In High River, no more than three hens are allowed on a single property.

There was one skeptical voice in county chambers: “I have had absolutely zero requests (for this),” said Coun. Dennis Primeau, the usual suspect. He was concerned with the timeliness of this.

“It makes some people happy to have their chickens,” countered Stitsen, who pointed out it doesn’t really cost the county much to get going on a land use bylaw amendment of this nature.

No backyard chickens are allowed in the Town of Westlock either.