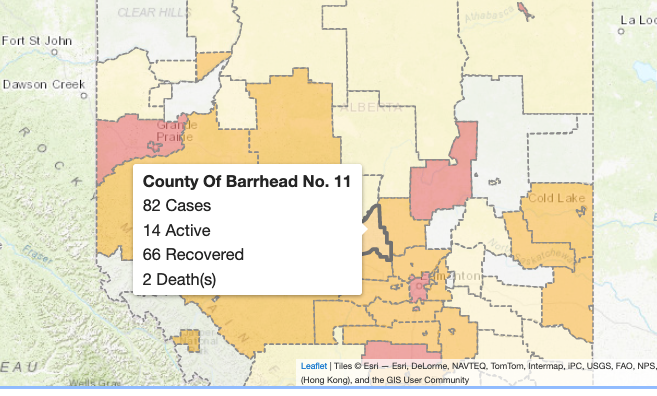 The province reports that the Barrhead region has 14 active COVID-19 cases.

Premier Jason Kenney implored Albertans to adhere to public health in the weeks to come, so the province does not see the same spike in COVID-19 cases that happened at Thanksgiving.

Kenney made the statement during the April 1, COVID-19 briefing he made jointly with Alberta's chief medical officer of health Deena Hinshaw.

He said he had hoped to tell Albertans that they had turned the corner and that people could celebrate the holiday with extended family and friends.

Instead, Kenney told Albertans that they had entered a third COVID-19 wave.

"The fact is, all of our leading indicators are telling us that we are now in a significant new wave of COVID-19. How bad that wave will be is up to all of us. How many hundreds or thousands of people it sends to hospitals, how many surgeries it forces us to cancel and how many lives it takes is all up to the decisions that we make now," he said.

He noted that the province entered its second wave of COVID-19 infections after Thanksgiving.

"We know with great certainty that we will have close to 500 COVID patients in hospital just two weeks from now. If growth continues at its current pace, that will turn into about 1,000 people a month from now and so on," he said.

On April 5, AHS reported that there had been 887 new COVID-19 tests over the past 24 hours with 432 being of the variant variety.

In the Barrhead region, there are 14 active COVID-19 cases. In Alberta, 312 people are in the hospital, 76 of which are in ICUs.

If people do not make changes in their behaviour, Kenney said, the number of people who would eventually end up in hospitals and ICUs was a matter of "simple math".

Even though the province is undertaking a rigorous vaccination campaign, a spike in COVID-19 cases puts the public in a dangerous position, Hinshaw said.

She added that she is concerned that because the most at-risk age group of those over 75 years old can or have received their vaccinations, some people will believe the risk of severe outcomes will no longer happen.

"This is not accurate. In our second wave, we saw a daily average of around 500 Albertans under 75 in hospital, with 119 needing ICU care and five deaths," Hinshaw said. "[Currently] the average age of hospitalizations from COVID-19 in Alberta is 62 and the average age for those requiring ICU care is 58. We are a long way from being able to offer the vaccine to all those a COVID-19 infection means hospitalization and life support."

She also said the increasing number of variant infections are not only more contagious, but in the case of B117, more likely to cause severe illness.

In a series of April 5 Tweets, she also stated that public health officials are investigating two workplace outbreaks of the P.1 variant, which was first discovered in Brazil.

One outbreak involves three work sites in the North and Central zones, while a separate one involves a workplace in the Calgary Zone.
"The outbreak started with a traveller returning to Alberta from out of province. To date, the spread has been confined to three work sites in Central and North Zone, where employees travelled between sites."