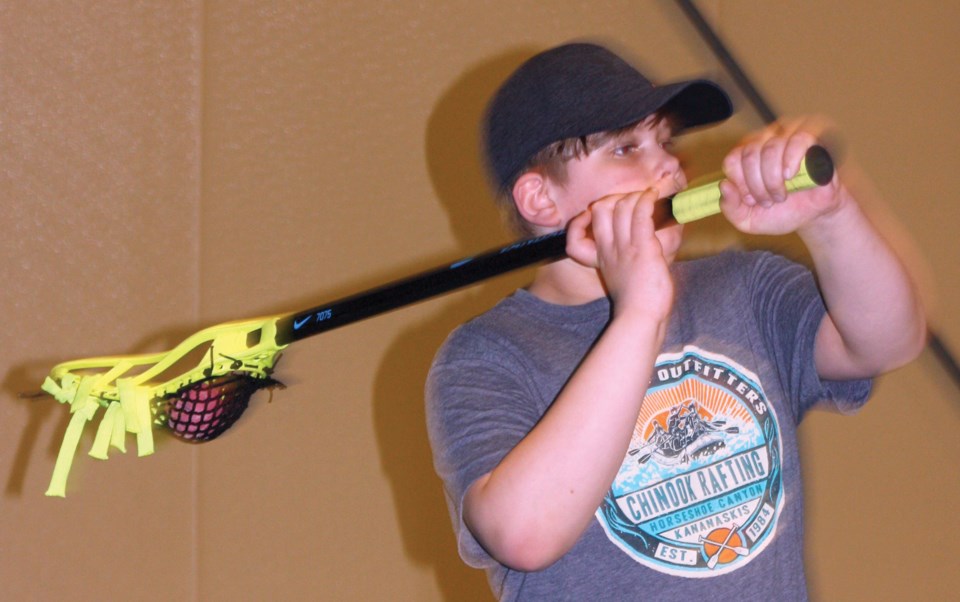 Devlyn Finnegan was at the Rotary Spirit Centre field house March 12 to try his hand at lacrosse and see if he would like to wear a Westlock Rock jersey when the season gets underway, if it gets underway. It was the second to last such event meant to show new players what the sport is all about. The last was scheduled to take place Thursday, March 19, but has since been cancelled due to coronavirus concerns. Chris Zwick/WN

WESTLOCK - The COVID-19 pandemic is slowly moving into Alberta, prompting a series of preventative measures to help flatten the curve in the province.

In sports, that meant Friday, March 13 was the day when most associations in Alberta, at the direction of their national governing bodies, cancelled or postponed all sanctioned events from practices to camps and championships.

For Westlock, the weekend suddenly emptied out of four different competitions, and two playoff final games that were supposed to be hosted here: basketball zones for 1A, both boys and girls hosted by St. Mary School, 3A zones for girls hosted by R.F. Staples School, a men’s bonspiel and a midget league title game.

The R.F. senior boys were scheduled to travel to Athabasca for zones, and the U12 Pembina Power had league championships to attend in Red Deer — both cancelled.

As for the future, some remain optimistic while other leagues have been uncompromising and fully ended the entire season.

“In the many, many years of coaching, playing, and being a hockey parent, I’ve never had a season not finish,” said Gil Dubrule.

He coaches the Westlock Midget Warriors, who were supposed to start their series of three in the Interlock playoffs final March 13 at home against the CR Knights.

Instead, they saw an abrupt end to their season the same day they were supposed to hit the ice. Hockey Canada announced that all activities sanctioned by them were cancelled “until further notice” due to the spread of COVID-19.

Since that’s the governing body of Hockey Alberta, which in turn governs over the Northern Alberta Interlock league, that meant an abrupt finish to a season that looked very promising for the young Warriors.

Dubrule says the team has been taking it well but for some of them, it was the last chance at a provincial run.

In a separate statement, Hockey Alberta offered some clarification:

“For clarity, the 2019-20 season is cancelled. All sanctioned hockey activities and events in Alberta (and Canada) are cancelled for the remainder of the 2019-20 season. “Until further notice” refers to the fact that the cancellation may extend beyond the conclusion of this season.”

By that time, some midget Warriors will have aged out of minor hockey.

“They’re not happy, but the kids understand that it needed to be done so they’re good.”

The last time they were allowed on the ice was Thursday night for practice.

Dubrule also confirmed that the cancellation extends to any hockey-related activity until (potentially) September, including the summer camps for younger brackets.

They usually pick back up in September for midget, so for now Dubrule says there’s little to do but wait until the situation clears up.

The week before, the bantam 1s had just lost the gold medal game to Edson, but the team at least got some closure and played its full route to provincials with no season interruptions.

Both U14 Pembina ringette teams were slated to compete in provincials next weekend, but a Ringette Alberta announcement on Friday cancelling the season meant their runs were over this season.

Although early in the day, it seemed like the ringette season would move on with some restrictions — cancelled banquets and opening ceremonies — Ringette Alberta officially cancelled all sanctioned events “until further notice.”

“The initial decision to proceed with the Provincial championships was based on Alberta’s Chief Medical Officers’ statement and prescriptive guidelines made on Thursday, March 12, 2020,” reads the press release.

On the list of cancelled events: Come Try Ringette, practice, all parties and banquets, the ringette conference in April, all league games, all championships and cups.

There are differences in how each sport is limiting seasons in the face of COVID-19. While hockey officially cancelled the entire season, and clarified “until further notice” means at least until September, it’s less clear if Ringette Alberta has put a timeline on the cancellation.

In the meantime, the U14 A and B teams, who were supposed to play in Lethbridge and Strathmore respectively, have to contend with unfinished business this season.

In the same boat are the U12s, for who league championships were scheduled for this weekend in Red Deer.

Both St. Mary School (1A) and R.F. Staples (3A) were scheduled to host basketball zones for north central Alberta schools over the weekend.

Even prior to the ASAA announcement, one team had already dropped out of the 1A zones

Matti Hurst, R.F. senior boys coach, was readying the team for zones in Athabasca, to be held at Edwin Parr Composite.

“As expected, everyone was disappointed. It’s a sudden way to end the season, especially when it feels unfinished,” she said.

Coaches were inclined to single out the Grade 12s on their teams, since they were the ones for whom things will certainly be left unfinished, with no chance to return next year.

“We’re uncertain at this point if the season will resume where it left off, we’re assuming it’s very unlikely though,” said Hurst on Friday.

As for Romanuik, metaphors always work to explain a situation: “you kind of feel like a carpenter who’s building a house and all your tools are taken away.”

He was behind organizing the SMS-hosted zones, but retains some optimism that they’ll be able to, at some point in the future, make up for the time lost.

“The word is ‘postponed.’ ‘Cancelled’ hasn’t been used yet,” he says.

On Sunday, March 15 the province announced the closure of all schools, in essence ending high school athletics for the foreseeable future.

Grown men also had to stop their sport events amidst the global pandemic — the Westlock Curling Club decided to cancel the three-day men’s bonspiel this weekend.

Fourteen teams were supposed to take over the sheets at Rotary Spirit Centre March 13-15.

“We were kicking around the idea this morning and then we heard Athabasca Ladies’ had cancelled theirs. The Multiplex had actually closed. We were talking to some other curling clubs, some shut down, some haven’t,” said organizer Paula Clark.

As was the case in all other sport cancellation instances, it was the governing body, Curling Alberta, that provided the ultimate direction in the scenario.

“We remain hopeful to reschedule and will share further information as soon as it is available,” reads their March 13 statement but Clark is less optimistic about the remainder of the season.

Everything is shutting down March 27 for curling in Westlock, she said.

The Canadian Collegiate Athletic Association event in Portage la Prairie, Man. was the only curling competition to continue uninterrupted, and where Clark was over the weekend supporting her daughter.

Town picks projects for stimulus grant program
Sep 22, 2020 10:30 AM
Comments
We welcome your feedback and encourage you to share your thoughts. We ask that you be respectful of others and their points of view, refrain from personal attacks and stay on topic. To learn about our commenting policies and how we moderate, please read our Community Guidelines.