Record heat and lack of rain leads to concerns from councillors
Jul 19, 2021 8:00 AM By: Heather Stocking 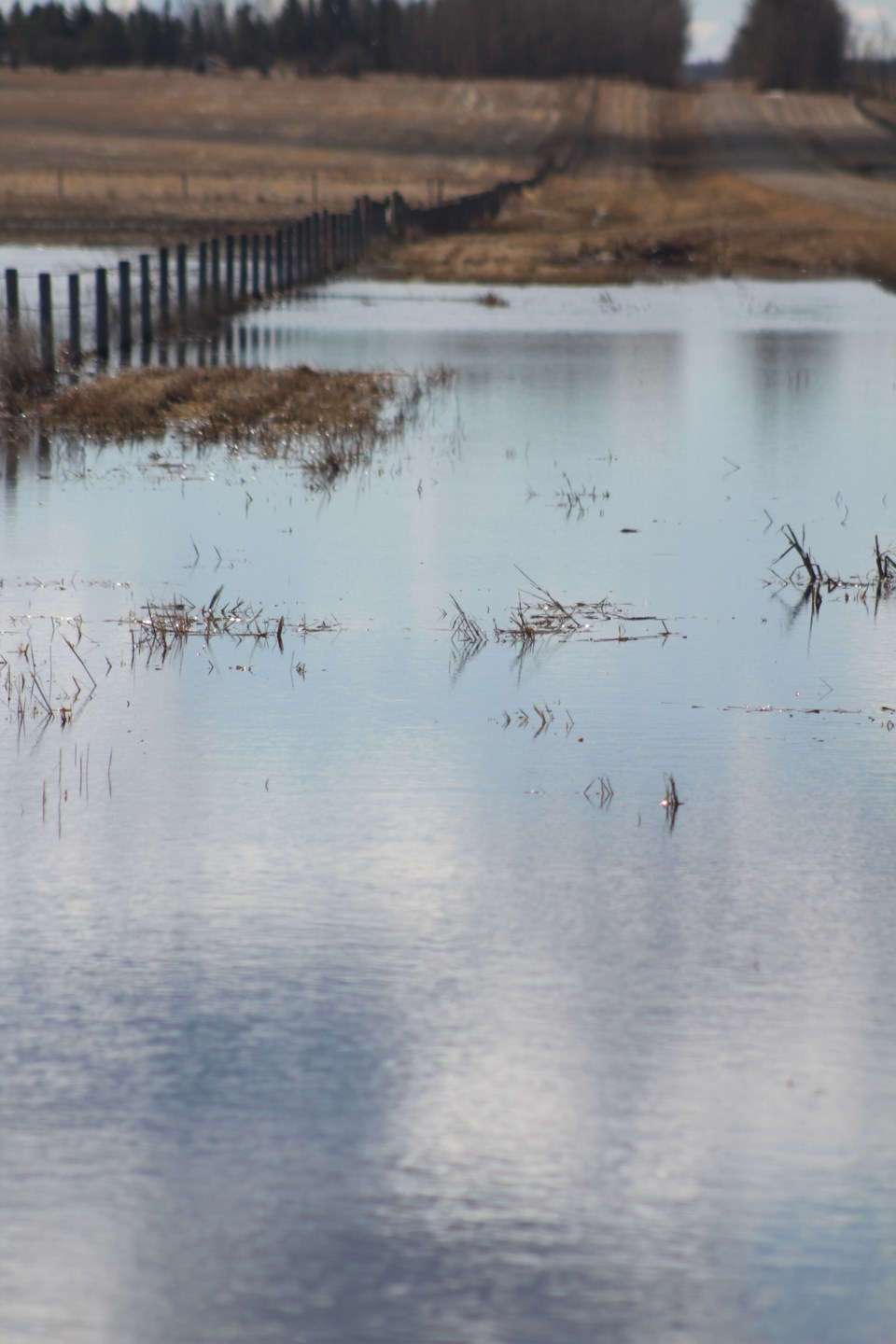 Last year it was too much rain, like these flooded ditches near Boyle, and this year it's not enough, making five years in a row Athabasca County may have to declare an agricultural emergency. Heather Stocking/AA

ATHABASCA — Spring started off well, crops growing, a good first cut and then the end of June arrived bringing the heat.

From June 25, temperatures rose from 29 C to 37 C on June 30 before dipping as low as 17 for three days then climbing again to 32 degrees and hovering in the mid-20s before shooting back up to 32 degrees July 8 to 10. Then the smoke came in from British Columbia’s fires blocking most of the heat, but what didn’t come was rain, at least not enough to fill dugouts and help crops grow.

And that is what started the conversation at the Athabasca County regular meeting July 13 when Coun. Penny Stewart noted there had been a bit of rain the previous weekend, but not everywhere and not enough to make a difference.

“I think we should be talking to our (agricultural) producers, see how they feel, look at suggestions. I know the time that we met with (Minister of Agriculture and Forestry Devin Dreeshen) there was a lot of good suggestions there regarding programs for crop insurance,” said Stewart. “Maybe we need to initiate some of that stuff and put some pressure on the ag minister. I just think we need to do something.”

Reeve Larry Armfelt suggested reaching out to other counties like Thorhild, Westlock and Barrhead to see how their crops are doing and possibly arranging a meeting.

“I do see an agricultural disaster on the horizon,” he said. “So, if we can start putting something together now, I would think it would be a good starting point.”

“I think what I’d like to know is what they intend to do about it, like talk to our MLA (Glenn van Dijken), ‘Do you guys have any plans?’” said Coun. Dennis Willcott. “I mean they can see it’s a disaster too.”

Armfelt wanted to come with solutions when talking to van Dijken and Dreeshen however.

“I need your ideas, tell me what we can to do, but I want to tell them something (like Coun.) Doris Splane has something going on out there in Boyle,” said Armfelt. “I want to give him some thoughts of ours.”

Stewart noted crop insurance only covers the input costs, it doesn’t pay any bills or put food on the table and local producers should be asked their feelings on declaring or not.

“It’s not as simple to think about crop insurance when you’re going into five years of disasters and agriculture is key to this community,” she said. “The big question is do they feel we should declare? What can we do or who can we talk to? Big deal to just declare and nothing happens. We need to be talking to the minister.”

Willcott said he noticed some good first cuts of hay around the region, but Armfelt warned the first cut isn’t enough to bank on.

“If this weather keeps going like it’s going by the end of July, we’ll be feeding those bales,” said Armfelt.

Expanding on that Splane added cattle producers need to be included as well, noting sloughs are drying up and some farmers are hauling water in to refill dugouts. Coun. Travais Johnson added there are predictions of food shortages due to the five years in a row of flooding or heat and MP Shannon Stubbs should be included.

“The federal government has got some skin in the game bailing out the east and Bombardier,” he said.

Armfelt will reach out to all three government representatives while administration checks with neighbouring municipalities and all will report back at the next meeting or sooner.