County of Barrhead signs off on RCMP’s annual performance plan

RCMP Sgt. Dodds said drug addiction still the cause of the majority of the area’s crime
Apr 13, 2021 3:00 PM By: Barry Kerton 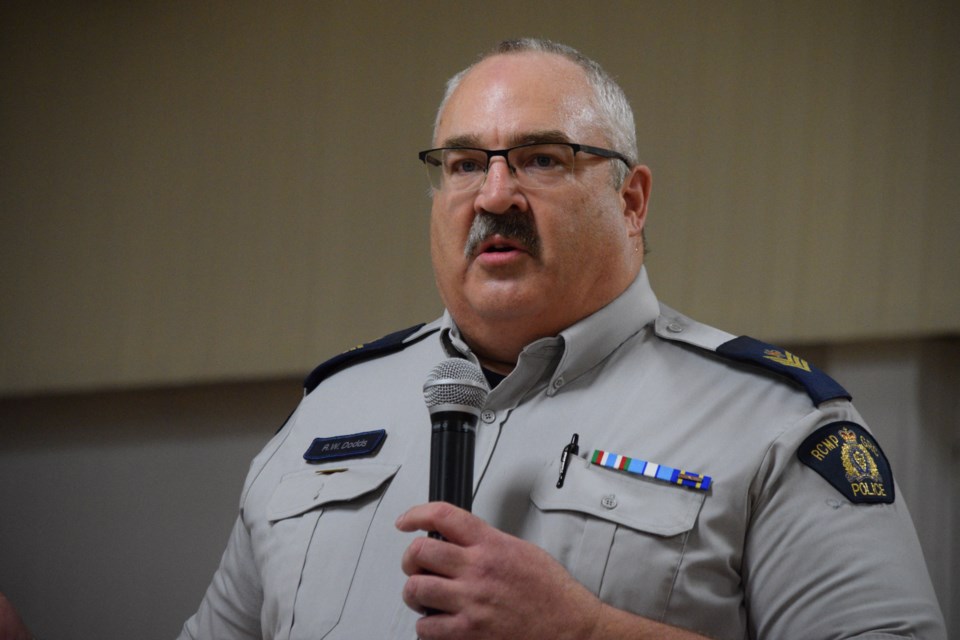 Barrhead RCMP Detachment commander Sgt. Bob Dodds, pictured here at a February 2020 Town Hall meeting in Fort Assiniboine, told County of Barrhead councillors at their April 6 meeting that the majority of all crime stems from drugs and drug addiction.

That is what councillors decided after hearing from Barrhead RCMP Detachment Commander Sgt. Bob Dodds during their April 6 meeting.

Dodds was at the meeting to present the detachment's 2021 APP. This was the third meeting Dodds had with a municipal council regarding the APP, having already met with both the Town of Barrhead and Woodlands County.

The APP is a document that outlines the detachment's policing priorities. It is created with input from the municipal governments that it serves as part of its public engagement component. This year, Dodds also asked for public input via e-mail through the Barrhead and Area Regional Crime Coalition (BARCC).

"Typically, what we hear [from municipal councils] is to increase the visibility of police and that is something we plan to continue," Dodds said, adding it was also part of 2020's APP.

In past years, other APP priorities have included property crime reduction and traffic safety initiatives.

However, this year Dodds said the detachment will add drug enforcement to the list of APP priorities.

"As a society, we are moving away from possession offences," he said.

In his previous meetings with the Town of Barrhead and Woodlands County councils, Dodds mentioned that Crown prosecutors are shying away from prosecuting people for "simple possession."

Reeve Doug Drozd asked if different groups were trafficking "hard drugs" such as cocaine, heroin, and meth, alongside soft drugs like marijuana.

"I worry that you cast a net and you catch someone who is growing a little extra [marijuana]. Those are not the type of bad actors that you want to round up," he said.

Dodds agreed, saying the area had a "mixed bag" of traffickers.

"Some people will have a broader scope of what they are trafficking ... There are a couple of different levels of drug traffickers. I would not be surprised to find a whole pharmacy of different types of drugs during an operation," he said. "But this is a small community. Generally, we know who is doing what and we are not targeting people growing five marijuana plants."

He also added the drug of choice and the one that is causing the most damage in the community is meth and fentanyl.

Coun. Ron Kleinfeldt asked if carfentanil was an issue.

Carfentanil  is a synthetic opioid. Traditionally, carfentanil is used by veterinarians to tranquilize and sedate farm animals, or large wild animals. According to Alberta Health Services it 4,000 times more potent than heroin and 10,000 times more toxic than morphine.

Dodds said they have not seen a lot of carfentanil.

"We did have an overdose recently that we believe might have been because of carfentanil, but we are waiting on the toxicology results to confirm," he said. "It is still around the province and potentially in the area as well."

Dodds did not comment on the houses specifically but noted the detachment has limited resources and cannot target every suspected trafficker or drug house.

"We will identify three or four places, focus on them," he said. "That is subject to change. Sometimes you get some really good information and you can act on it sooner ... but to conduct a thorough investigation and get a warrant takes a lot of time and effort. The reality is that if you want us to bump something else, we need the information.

Dodds said he advises people who suspect there is a drug house in their neighbourhood to document what they see over a prolonged period.

"Over the last month, this is what we have seen, a list of vehicles that we have seen coming and going. That is the type of information that is going to bump it up," he said.

Lane then asked if undercover drug operations were still happening.

Dodds said they were but that they were reserved for the most troublesome parts of the province.

"While the County of Barrhead and our detachment area have problems, the reality is if you compare it with other communities in the Eastern Alberta District, they are pretty minor," he said.

Coun. Darrell Troock asked what the detachment was doing to combat telephone and Internet scams.

He said at the detachment level, there wasn't much they could do.

"When people call the detachment about a scam, we often refer them to Canadian Anti-Fraud Centre because they have the resources to track these characters down," Dodds said. "The reality is most of these scams are from overseas and some guy, in whatever country, is not going to get caught. And until we solve world poverty and everyone has a job and can sustain themselves, there will always be people trying to take advantage of people."