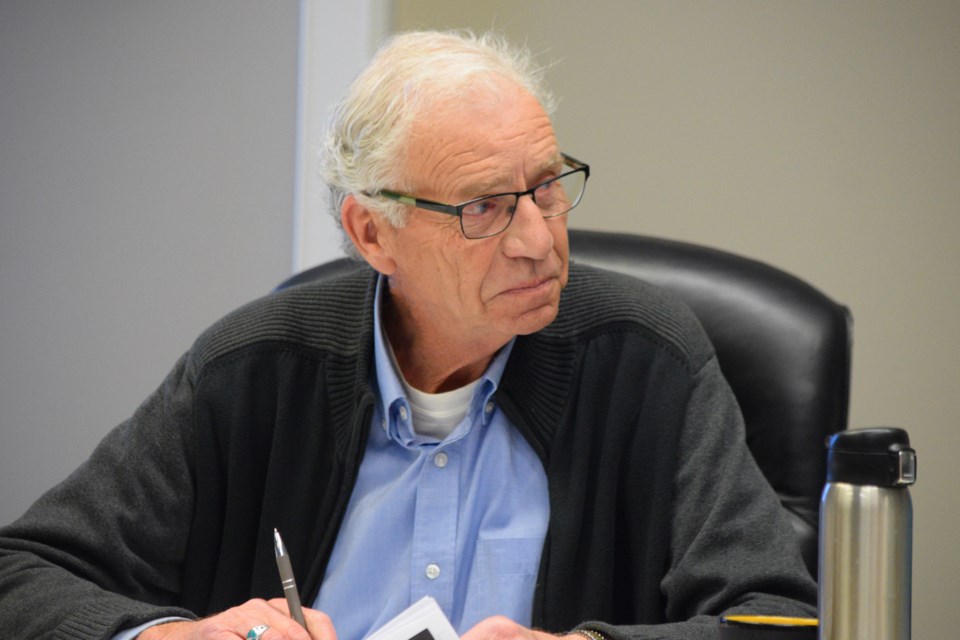 County of Barrhead Coun. Dennis Nanninga said it isn't too much fun being a councillor in Division 7 in the spring time due to poor road conditions.

BARRHEAD-Something has to be done about the condition of the roads in the County of Barrhead.

That is what Counc. Bill Lane said during a discussion on whether or not the municipality should enter into agreements with several landowners to compensate them for any damage caused to crops and borrow areas during reconstruction work of over three kilometres of Range Road 22 south of Highway 651, near Dunstable School. It should be noted that councillors authorized the reeve and county manager to enter into agreements with 14 property owners at an estimated cost of about $10,000.

"We have to do something," he said. "We can't just keep going in and throwing a bunch of gravel on these soft roads. We need to start rebuilding some of these roads before we start paving."

Lane added the roads in Division 7 are in particularly poor shape.

Public works Supt. Ken Hove said Divisions 6 and 7 are particularly difficult to maintain during certain times of the year due to differing soil conditions.

Coun. Darrell Troock said adding to the difficulty in road upkeep in those two divisions was the size and weight of some of the vehicles travelling on them.

"You have equipment that's larger than the roads were designed for back in the day, so of course you are going to have these troubles," he said. "Unless we rebuild every road [in those two divisions] we are going to have this issue for some time to come."

Troock added there wasn't much they could do.

"Maybe we could step up the timeline for the rebuilding of those roads, but not at the expense of the entire county," he said. "The road we are discussing now has been on the books for at least 10 years. I agree that we need to start looking at it but it should be at the expense of the project that have already been agreed to."

Nanninga agreed with Troock saying the only solution he saw to deal with some of the road issues in his division is to start from scratch.

"The high water table combined with the fact that there are many roads with no base, just dirt pulled up out of the ditch. I can tell you, in the spring it isn't much fun being a councillor for Division 7."

Councillors approved a recommendation from administration to cancel their Aug. 4 council meeting.

Councillors unanimously awarded the tender for a half tonne crew cab 4x4 pickup truck to Barrhead Ford for $39,516. The truck replaces a 2004 Dodge D250.