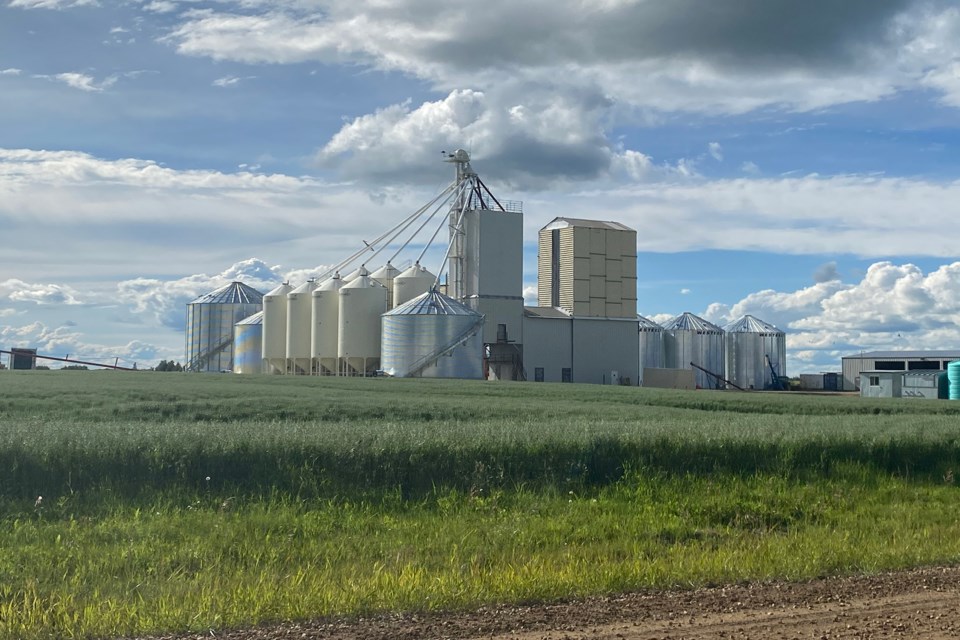 The Jonk's facility east of the Town of Westlock viewed from Range Road 262. Andreea Resmerita/T&C

WESTLOCK — A dispute between Westlock County and the Jonk family over the farmers’ grain handling facility has come to a resolution, the family says.

The Jonks recently won an appeal to a county-issued stop order for that facility. The Subdivision and Development Appeal Board (SDAB) told the Jonks June 30 they could proceed with their operations.

But the dispute began in 2015, when the Jonks went to the county for a development permit to build a grain handling and grain processing facility—a 5,000 square foot shop was part of this too.

At the time, “someone at Westlock County” denied the permit. The Jonks appealed and went before SDAB Aug. 28, 2015. They were successful.

Still, “someone at Westlock County did not like that.” This history is included in the Jonks’ most recent appeal, where they alleged a history of abuse that more or less begins with that original 2015 development permit, but doesn’t stop there.

Next, “presumably that same person at Westlock County” issued a stop order in October 2015, claiming that the building was commercial as opposed to farm, and they needed a building permit. The Jonks appealed that and again SDAB agreed with them.

“The person at Westlock County would, again, have been unhappy,” reads the appeal, under the section header “History of abuse.”

Then came the wrongful assessment of their lands. Predictably, this also led to a successful appeal in front of SDAB, but the details are important. Again, “someone at Westlock County” assessed their land as industrial for 2019. When they got their tax bill, it came in at $27,567.55. The previous year—when their lands were farm—their tax levy was $1,510.65.

After the appeal—it was Feb. 24 when this was resolved—the county agreed to an assessment of mostly farming lands with a portion as commercial. Their tax levy: $3,986.84.

Then came two stop orders May 8, one for the grain handling facility and another for a seed cleaning facility—the Jonks claim they don’t have the latter and they clean their seed at Westlock Seed Cleaning Co-Op.

Except this history of abuse levied against “someone at Westlock County” seemed to have vanished by July 24, when TC Staff spoke with Theo Jonk, one of the operators. He and his father, Nick Jonk, operate the farm together on their grandmother, Wilhelmina Jonk’s lands. All three were signatories on the appeal, filed through a lawyer.

Then he’s firm about two things: “That’s been resolved, there’s no hard feelings, no issues.” Also, no comment on the history of abuse.

He says they had a meeting with Westlock County representatives some time last week and sorted it out. But he wasn’t clear on what sorting it out meant either.

“Through the appeal, everything came out and everybody’s happier and better for it in the end,” he said.

Later in the conversation, after some pressing, he added that “we all sat down and aired everything out.” Their plans for the facility came up, but so did one minor recognition: “There was probably some miscommunication.”

Westlock County wasn’t available for comment, but in a July 16 press release, they stated that they accept SDAB’s decision and “look forward to working cooperatively with future subdivision and development proposals and applications.” The rest of the one-page letter is similarly general—apart from the few mentions that particularly identify the hearing on June 30.

In a written statement Jonk provided—it’s also a little speech he made following the SDAB decision—he wrote that they’re looking forward to improving their farm operations.

“We look forward to work cooperatively with Westlock County and our neighbours. With our grain handling system we are working to add value to our operation by being more efficient, profitable and diversified.”

There’s one detail in here too, that the grain handling facility isn’t yet fully operational, not the way they plan to see it at least: “our goal is to have the equipment up and running in 2021.” They’ll be modernizing it “to reduce labour and time,” and “to reduce our dependency on world prices, generate higher return and explore our marketing options.”

As he said in person too, what they’re doing is taking a low-quality grain, like a feed oat, and improving it before it goes out to market. He’s a little more specific in the letter about how exactly they want to do that.

But Theo was also adamant about this: they only run their own grain through the facility, not anybody else’s. That was essentially the crux of the grain handling matter: the county was claiming that they’re using their operation for commercial purposes, i.e. paid customers get their grain processed there.

In the appeal, they explain that sometimes, when they have a bad season, they might buy grain to augment their own yield.

Despite the misgivings Theo had around providing specifics of the squabble and its ultimate resolution, there’s one thing that’s conclusive: the Jonks just want to move on. Theo did repeat this after almost every question.

Except they can’t quite yet. Also involved is the Jonks’ neighbour, who owns an acreage. There, both the Jonks and Westlock County are faced with a lawsuit.

Norm Mercier, the neighbour, submitted a letter of support for the county’s stop orders during this June appeal process. Enter the second stop order, for a seed cleaning facility which the Jonks say they don’t have.

In that letter, Greg Lintz, Mercier’s lawyer, writes that there is a “now constructed seed cleaning plant” 250 feet from his house, and a shop 10 feet from the property line.

His problem is that the facilities the Jonks operate have caused his property to flood, plus it’s noisy, dusty, and there’s “truck traffic arising from the commercial enterprise taking place on the Jonk lands:” practically, a nuisance.

In this entire process, people have taken sides. Farmers think the county doesn’t want to see development happening, that they’re purposefully stifling it. They agree that what the Jonks have been faced with is unreasonable.

But there’s also acreage owners: some of them have reached out to TC Staff anonymously to express concern over a farmer who can seemingly do what he wants without a permit. They’re worried about property values, about noise and about being chased off from where they live.