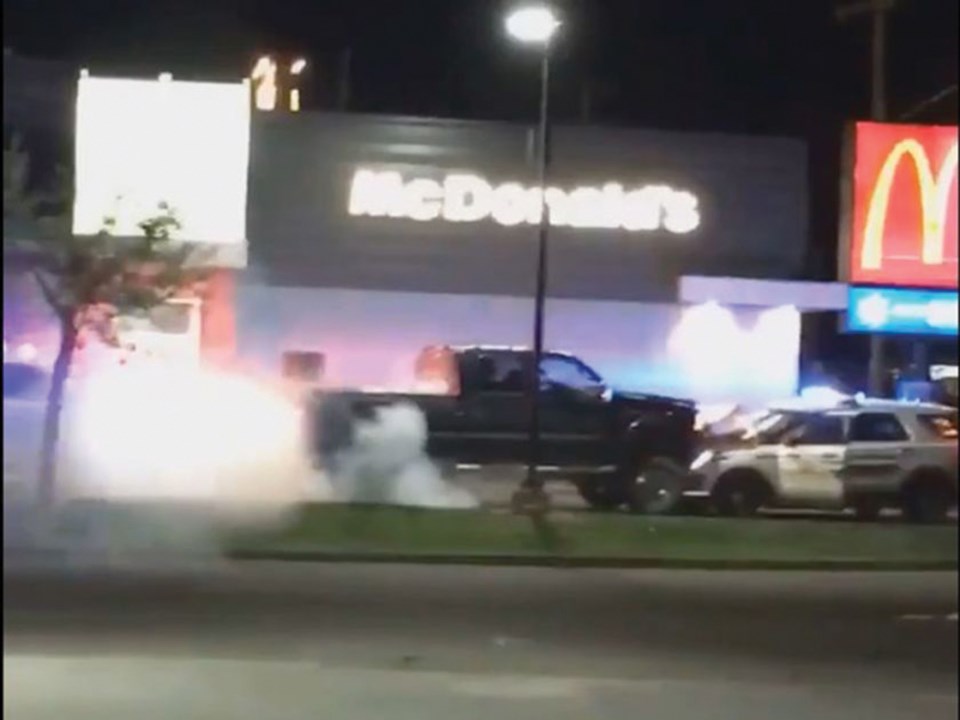 Damian Devon Thomas, 25, of Whitecourt was sentenced to a year in jail for his part in a June incident at the McDonald’s drive-thru that saw him repeatedly ram two RCMP vehicles with a stolen truck as he tried to make his escape. The video, pictured above, made the national news as well as the social media feeds of millions around the country.

WESTLOCK - A Whitecourt man who made a viral sensation of Westlock for all the wrong reasons was sentenced to a year in jail last week for an incident with RCMP in the McDonald’s drive-thru last summer.

Damian Devon Thomas, 25, of Whitecourt, appeared shackled by the feet in Westlock Provincial Court Jan. 8, which was scheduled to be his trial day.

Instead, he avoided the trial and pleaded guilty to 11 charges that included two counts of assaulting a peace officer, several counts of drug possession, as well as a charge of possession of a weapon and several breaches.

Crown prosecutor Scott Niblock recounted the story for Judge Bruce Garriock, which started in a McDonald’s drive-thru around midnight June 14, 2019.

Court heard Thomas and a female passenger were in the restaurant drive-thru that night, followed by an RCMP member, who subsequently ran the plates of the vehicle ahead and found it was stolen and called for assistance.

The other police vehicle soon showed up at the scene and entered the drive-thru from the front, blocking Thomas in between the two RCMP vehicles.

Judge Garriock heard Thomas then drove forward into the second RCMP vehicle in an effort to escape.

He then drove backward into the first RCMP vehicle. After several attempts, which made the second RCMP vehicle in front inoperable and caused the officer to have to leave the vehicle, Thomas tried to escape over the curb, hitting a sign and a tree.

Officers were able to get close enough to the truck at that point to apply pepper spray to the assailants, drag them out of the vehicle and place them under arrest.

The subsequent cellphone footage, taken by a passer-by, was posted to the Internet and became a viral sensation, spreading around the country and appearing in the feeds of millions of social media consumers and on TV news.

Court heard that upon search of the vehicle, RCMP located 60 grams of methamphetamine, seven grams of heroin, five grams of cocaine and a modified pellet gun.

Defence lawyer David Keyes told court his client had been involved with drugs since he was a youth, but “understands this is not how people are supposed to act.”

Judge Garriock also viewed what he called “an unenviable criminal record” before considering the joint submission from Crown and defence for a year in jail and a year of probation.

Thomas declined to say anything when given the opportunity.

Judge Garriock sentenced him to six months each for assaulting the peace officers (to be served concurrently); for operation of a vehicle while prohibited he will serve another six months consecutively; while 12 months of probation was added for possession of a prohibited weapon.

Thomas received another 30 days each for two breach of conditions charges (to be served concurrently) and well as nine months, concurrent for possession of the stolen vehicle, along with a $500 fine and 30 additional, concurrent days in jail for the possession of a controlled substance charges.

Court heard Thomas had been in jail since June 14 and has served 210 actual days, resulting in enhanced credit of 255 days, leaving him with 110 days remaining in his sentence

Eight charges against the woman who was also in the vehicle at the time of the drive-thru incident were also scheduled to go to trial that day, but were withdrawn by the Crown.