Residents frustrated by lack of government action to limit shooters and ATVers
May 2, 2021 8:00 AM By: Les Dunford 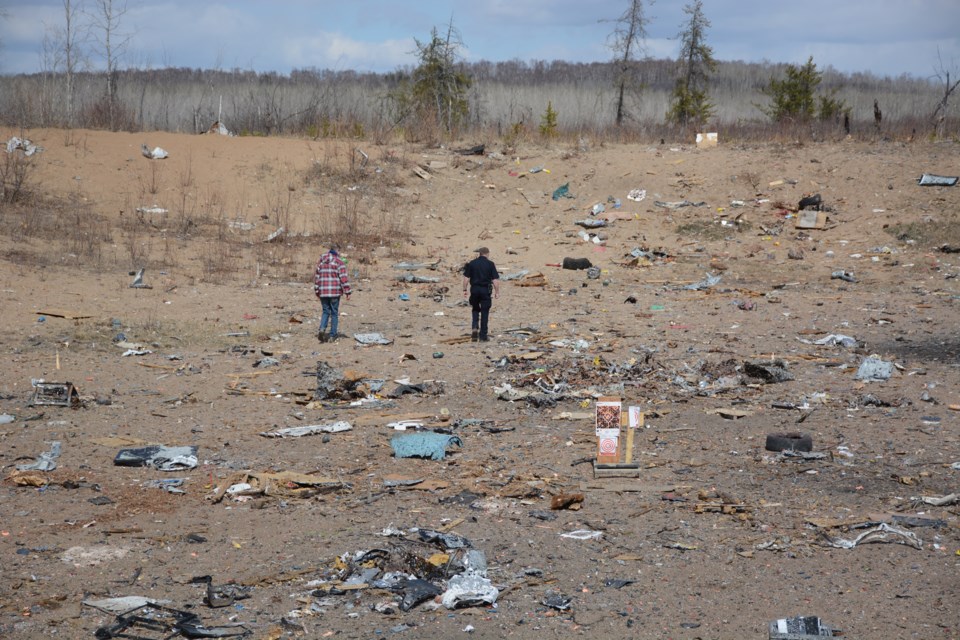 Westlock County reeve Jared Stitsen and county protective services manager John Biro walk across the heavily littered Echo Lake area sandpit April 24. The site contains a mixture of garbage, targets, and other spent spell casings. Les Dunford/WN
WESTLOCK - An April 10 fire in the Echo Lake/Landing Trail area that scorched approximately 10 acres before Westlock County volunteer firefighters were able to bring it under control has re-kindled a concern that goes back at least a dozen years.

And the ongoing issues at the site, once dubbed a ‘war zone’, sparked one resident to organize a meeting in an attempt to bring it under control. Two dozen people attended, including county reeve Jared Stitsen, county manager of protective services John Biro, local residents and local and city media.

Biro said this latest fire on Crown land, which is at an old well site, was caused by an abandoned campfire, probably from the previous day, that had not been completely extinguished. The county now has a fire restriction in effect, as per Bylaw 01-2019, that bans quads, motorbikes, ATVs, shooting and fires and there are signs everywhere along the roadsides, big enough to be able to read even as you drive by.

The area resembles an unruly garbage dump, with old appliances, wood, tires, shot-up propane tanks and hundreds of shotgun, rifle and even handgun shell casings strewn over the sandpit and the trail leading into it — a number of live rounds of .22 calibre shells were also found.

Quadders, bikers and even some horseback riders have all previously used the area as well, but are finding more and more dangerous.

“Somebody is going to get killed out here,” said Bevin McNelly, who farms nearby.

He says he’d like to see the area completely shut down during the springtime fire ban, especially to shooters.

“The guns are an issue, but the quadders are an issue too, and the fires are the biggest issue. Without the quadders and the guns, there wouldn’t be any fires. Every year, every two years, we’ve got a fire out here. People here are scared to go away in the spring, because you could get a phone call saying the fire’s coming up to your back yard,” McNelly said.

For the past dozen years he’s been after the county and the provincial government, “But nobody wants to do anything. We have another fire, and then the fire season passes by and grass starts getting green, and everybody forgets about it again. Until the next year.”

He added the county can’t be blamed because it costs money to patrol it, but said the provincial government needs to come up with a solution.

“It’s costing taxpayers hundreds of thousands, if not millions of dollars to fight these fires all the time. The government could pay the county to hire somebody year round. What I’d like to see is it shut down completely during the fire threat in the spring, and if they want to open it back up to the quadders, go ahead. I’ve always maintained they need somewhere to go. But the guns, the shooters, no. They're just a bunch of idiots that go out there and have no respect for anything. They don’t care. They just go out there and shoot, shoot, shoot, shoot.”

Another neighbour, who wanted to remain anonymous, says nobody in the provincial government wants to own the problem, and letters that have been sent to Alberta Environment and Parks minister Jason Nixon just get sent down the chain of command. He also thinks the area should be closed to everyone.

Stitsen said there needs to be some government involvement, as all this falls back on the county and ratepayers, but there’s only so much municipal manpower. “We’d like to have guys out there patrolling more often, but we have other issues within the hamlets and the county.”

Biro said, “You’re damned if you do and damned if you don’t,” about putting the fire restriction in place and banning quadding, biking, shooting and fires, but the situation is basically out of control. He showed the Westlock News a .50-calibre bullet casing picked up at the site, plus handgun casings, neither of which, he said, is legal. Nor is this Crown land a gun range to begin with, he added.

“It’s not a rifle range. It’s not a place where you can bring your household garbage and just leave it for somebody else to pick up,” he said.

He is also a hunter but says this is not the way to do target practice.

Stitsen added: “One thing I did find out is there’s an off-highway vehicle group that wants to come out and do some clean up out there. They want to come out with bins and a bunch of stuff to clean it up. They’re not a local group, but they do this all over, and get their name out there and want to keep these areas open.”

Perhaps the most observant question came from Ava Henry, who spoke at the media availability. “Mommy, why do people do things like this?”