Encouraging people to report those who violate Public Reserves Bylaw

County manager Debbie Oyarzun said the municipality need to do something to dissuade people who cut down vegetation or drive ATVs on public reserve lands
Feb 24, 2021 12:00 PM By: Barry Kerton 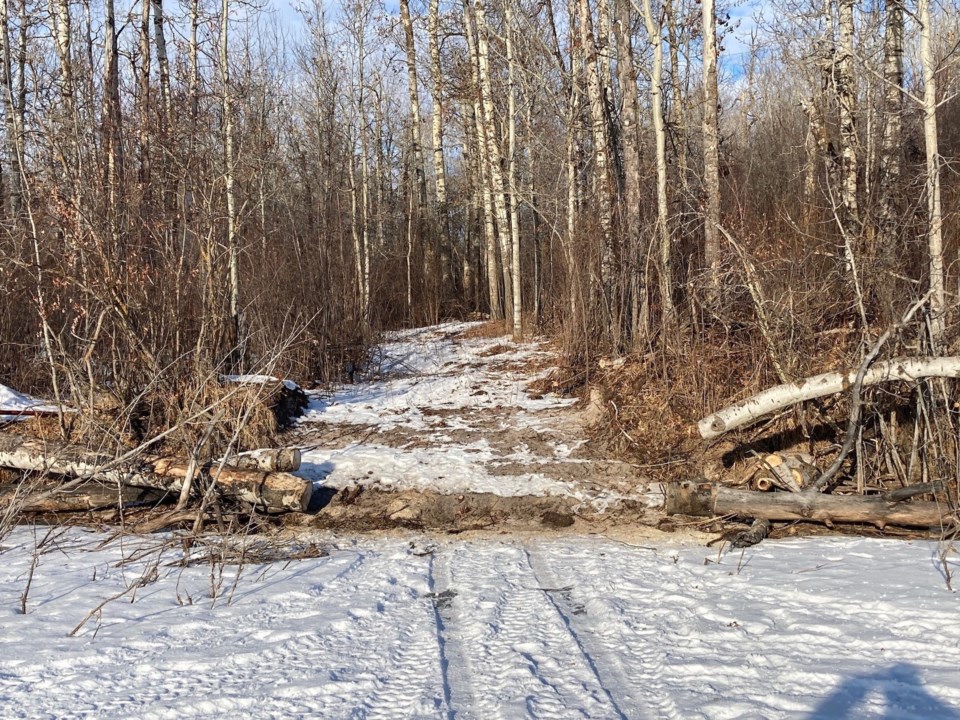 An area resident notified the County of Barrhead that someone had clearcut a path wide enough to drive a full-sized pickup through on one of the county's MR lands near Lac La Nonne.

BARRHEAD-The County of Barrhead is hoping new signage will stop residents from illegally removing trees and vegetation from its municipal reserve (MR) lands without permission.

Municipal public reserve land is a 30-metre strip of land surrounding a lake or body of water, which purpose of which is to provide a buffer between residential property and sensitive ecological areas.  The majority of the municipality's reserve lands are adjacent to Thunder Lake and Lac La Nonne.

County manager Debbie Oyarzun told councillors during their Feb. 16 meeting that the municipality is continuing to have problems with nearby residents who are illegally cutting vegetation in the MR, whether it is to improve their view, create a pathway for their off-highway vehicles or to use as an extension of their own property.

She said a Lac La Nonne resident informed them recently that a pathway large enough for an OHV to drive through had been clearcut from a municipal reserve.

"The general public cannot be cutting trees, or mowing it — it is not their land, it is county property," Oyarzun said, adding it has been a significant issue for several years.

Although MRs are in ecologically sensitive areas, public use is allowed similar to a public park while motor vehicle use is prohibited.

In the spring of 2019, county staff conducted a tour of its Thunder Lake MR reserves and found over 400 violations. At the time Oyarzun said they would likely conduct a similar tour of their Lac La Nonne MR lands.

Oyarzun said recently they received a complaint noting that someone had cleared a "significant swath" on an MR in  Lac La Nonne.

To help combat the problem, they have ordered signs to be posted in areas where people have cleared an MR asking them to report further violations.

"We wanted to take this approach to let people who are taking the time to notify us know that we appreciate them telling us about it and that we are going to do something about it, in addition to being a deterrent," she said.

Coun. Darrell Troock said he found the sign confusing, referencing the statement saying "the area will be remediated".

"What does that mean? All the sign is doing is explaining bad behaviour," he said.

Coun. Dennis Nanninga said the sign would do little to stop people from conducting illegal activities, adding it is a bit ambiguous.

"If it said something like ‘if you are caught on this property, you will be hung at sundown’ that would be clear," he said.

Troock agreed, saying the sign should state that public use was welcome, but that OHVs and removing vegetation was prohibited.

He also suggested referencing the penalties.

"We've had trouble in that area before with ATVs but we found when we started putting signs up there saying there were ridiculously high fines, that's what chased them away," Troock said.

Oyarzun said the fines for violating the Public Reserves Bylaw would probably not scare anyone into compliance.

"The sign probably costs more than the fine," she said.

Although the fine is not included in the document, under the county's General Penalties Bylaw, the first offence for any bylaw that doesn't include a specific penalty section is $25, increasing to $50 and $100 for subsequent violations.