Fairies, foxes and the Sun King 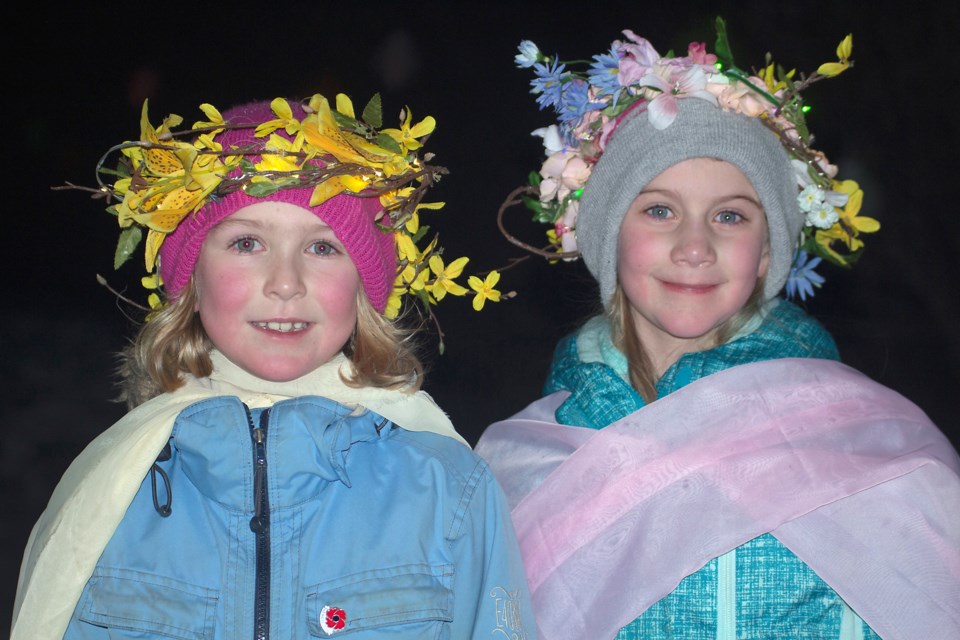 At the fifth-annual Lantern Walk near the Rotary Spirit Centre Jan. 3-4, fairies Rayna Kneller and Jodi Penner wondered among the lantern-laden woods, telling the story of the Sun King, their fears that he might never come back and the world will remain frozen. Andreea Resmerita/WN

WESTLOCK - The event is, in appearance, remarkably simple — perhaps on purpose.

To organizers, the annual Lantern Walk is suggestive of small-town living, peaceful, as some 500 lanterns are strewn about the woods near the tennis courts at the Rotary Spirit Centre to form a path. Along the way, there was a story.

For the fifth year in a row, Nyssa Kneller organized the Lantern Walk over two nights, Jan. 3-4. Kneller has been in Westlock for eight years and for five of those she’s organized this walk, but this is the first year they’ve done the walk in January as opposed to December.

Students from St. Mary School and Westlock Elementary School made the lanterns themselves.

Millennials and, even more poignantly, Generation Z, have a very simple way of using language: a general term just implies a sensation. “Mood” or “vibe” are good examples. They can rarely be used interchangeably, but in this case, they apply.

You can use them, for example, on a song that’s outwardly, a little specific in tune and melody, that works only in particular settings – it’s a very positive set of words that essentially means something (like that song, or an event, a place) has achieved its purpose.

Well, the Lantern Walk was definitely a mood. A vibe.

The lanterns were dim, appropriately. You had to sometimes duck under tree branches until you suddenly reached a clearing, more of a wide old timey road it seemed like, still covered in snow, with shrubbery and trees outlining it on either side.

Then the trees and lanterns guided you back into the windy thicket. It sometimes looked like winter fireflies if you looked into the distance.

It didn’t matter if you knew the place before that night because it no longer looked like itself. It was part of the story now, the setting of the winter solstice, the dying and rebirth of the Sun King, a frozen moment in time when fairies think the world is doomed and winter will never end.

And the walker’s renewal happened too, around the firepit. Where it stood, right at the start of the walk, it was both guiding beacon and fountain of rejuvenation for frostbitten fingers and toes.

Most importantly though, is that this year was the most successful — 300 people filtered through over the weekend – indicative of good decision-making on the part of Kneller to move it to January, and even more suggestive of the community’s appreciation for the simple things.

Rainy days ahead
Jul 13, 2020 11:23 AM
Comments
We welcome your feedback and encourage you to share your thoughts. We ask that you be respectful of others and their points of view, refrain from personal attacks and stay on topic. To learn about our commenting policies and how we moderate, please read our Community Guidelines.