Finding your way as a woman in business

Overcoming the odds with help from Community Futures
Mar 9, 2021 1:01 PM By: Heather Stocking 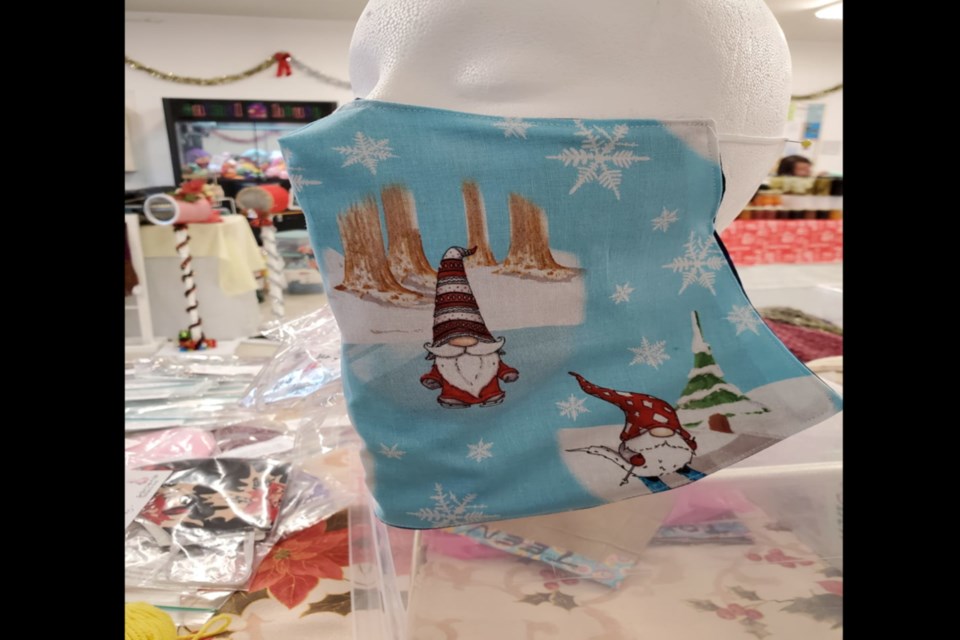 Just Purl Crafts and Gifts owner Leahann Rottier, one of only 16 per cent of Canadian small business owners who are women, has her home business because of help she got from Community Futures Tawatinaw Region and encourages other women to go into business. Rottier sells these fresh air masks and other items from her business located just outside Barrhead.Leahann Rottier

ATHABASCA/BARRHEAD/WESTLOCK — Statistically, almost half of Canada’s work force is made up of women over the age of 15, but women actually own less than 16 per cent of all the small- and medium-sized businesses out there.

It was not until 1964 that women could even open a bank account in their own name without permission from their husband or a male relative and while a lot has changed, women in business still face a lot of challenges.

That is where groups like Community Futures come in, and for many in the Town and Country This Week area, Community Futures Tawatinaw Region (CFTR) has been helping business owners, including women, to make their business dreams come true.

Leahann Rottier, owner of Just Purl Crafts and Gifts located outside Barrhead approached CFTR almost five years ago, just after she started her business to increase her stock.

“The money they provided for me to help get my inventory up, I'm still working on quite a bit of that,” said Rottier. “They helped me to figure out how to get a loan through Community Futures, and then pay back the loan within three to five years.”

That investment helped Rottier during the past year stay ahead, even while big box stores are struggling to keep their shelves stocked.

“My business is actually doing better than it did when the pandemic first started simply because stores like Michaels and Walmart are running into the same problem that I had which was getting stock,” she said. “But I already have an existing stock to begin with that other stores didn't have because they rotate through their stock so frequently.”

TCFR not only helped Rottier secure the loan, but gave her ideas on how to promote her home-based business.

“I already had my business plan set up for them to look at and then they gave me ideas of how to get people to know that I was around,” said Rottier. “That's where the problems arose because Amazon and Walmart and Michaels have more advertising power than me.  So, it was difficult to get people to come and check out the shop first before going to shop online.”

Her business can be found on Facebook but she has sage advice for women looking at starting their own business.

“Just make sure all your ducks are in a row,” she said. “If they're not all in a row, if you haven't got it all figured out about where you want to go, what you want to do and how you're going to do it, then don't start until you have all those in place.”

Getting those ducks in a row was another way TCFR helped Mitzie Mytz, the owner of Hymark Investments in Boyle.

Mytz not only has one business, but three, and all of them are in what is traditionally considered male-dominated industries; Lakeside Storage, Xcalibre Paintball and Hymark Pilot Services.

“I guess the industries that I'm involved with are male-dominant, definitely,” said Mytz. “You don't see many females out there especially rig moving and heavy equipment operating and that kind of stuff. You see it a little more nowadays, but not when I started 22 years ago.”

It was after a break-up, and wanting to buy out her ex’s share of the company, she went to CFTR and got not only help financially, but a shoulder to lean on.

"They were there when nobody else was,” she said. "I know a lot of times I kind of looked at things like, ‘How am I going to do this?’ and there wasn't a lot of support or there were a lot of people too that didn't think that I could do it because I'm a woman.”

She said having that support pushed her harder to show people she could make her businesses thrive and advises any woman looking to go into business that knowledge is power.

"Having the proper information and education to be able to execute the plans that you have is key and that advice from (CFTR) was a real turning point for me and my knowledge of how to operate my business and be able to look into the future so that I can plan better,” said Mytz.

When Deb Reddeman, co-owner of 2 Sisters Marketplace in Westlock became a widow, it was CFTR who helped her when the banks would not.

It was a chance meeting with one of the CFTR staff on the sidewalk in Westlock that led Reddeman and her sister to start with 300 square feet in Clyde before moving to 1,000 square feet, over the bowling alley in Westlock, and finally to the 2,000 square feet they now occupy in the Peavey Mart Mall.

And while sales are slow right now, Reddeman has started what she calls the Emergency Project; helping people who are victims of natural disasters or violence with basic items that have been donated to her business — ones good enough to use, but not quite good enough to sell.

"We start them off with small appliances, kitchen pots and pans, dishes, all the stuff that we have donated to us for thrift,” she said. “We've already helped out four people now; one in Athabasca and three in Westlock.”

“Do some investigating, study what she wants to get into, and just make sure that the markets not flooded,” she said. “I'm finding that my market now, which wasn't, but now it's every Tom, Dick and Harry that's out there trying to do this.”