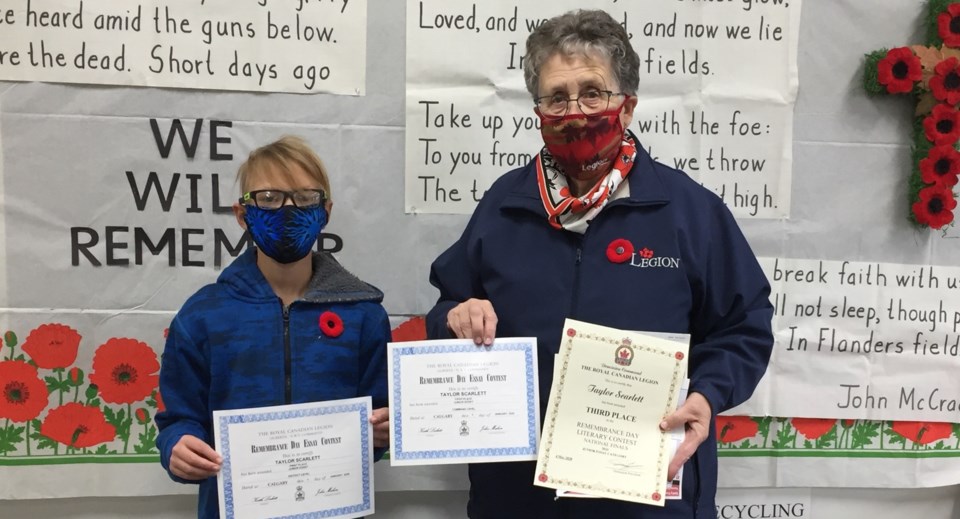 A Fort Assiniboine School student has received national recognition for his writing.

Each year the Royal Canadian Legion asks school children from Grades 1 to 12 to enter their best poem, story, essay, or poster not only to promote the National Remembrance Day Service but also to honour Canada’s military contributions and heritage.

The contest is divided into four categories: primary (poster contest only) from grades 1-3, junior from Grades 4-6, intermediate from Grades 7-9 and senior from Grades 10-12. Each of those categories is broken down further into poems, essays, black and white posters and colour posters.

Scarlett competed in the Junior Essay category. To be judged at the national level Scarlett placed first at both the branch and divisional (provincial) level for his essay 'The Gruesome Battle' as part of last year's contest.

It is a fictional account of an unnamed protagonist, his brother Bob and his best friend Jerry, who are all serving with the Canadian Armed Forces in the infantry close to one of the European fronts.

It starts with the protagonist, alone in his tent, thinking about how gruesome the next battle will be and about his wife and children, a son and daughter at home. His family is the reason why he enlisted and they are the reason why he has the courage to go on. Bob and Jerry then burst into his tent to tell him they are about to pull out and go to the front.

He goes on to describe them marching to the front, the trenches and the subsequent battle in which the protagonist is seriously injured, losing consciousness from his wound — when he awakens, he finds himself in a hospital and that his friend Jerry died in the battle. The story ends a year later with the protagonist visiting Jerry's gravesite with his wife and children.

Scarlett said he got the idea partly through conversations they had in class as well as the fictionalized novels his class read, such the 'I Survived' series and Prisoner B52 about how service people and civilians survive the horror of war.

Grade 5/6 teacher Debbie Breitkreitz said she uses the historical fiction stories as a way to help her students understand what it was like to live in wartime from a wide variety of prospectives.

"[Taylor] is an amazing young man. He is hardworking, kind and compassionate and that really comes out in his writing. He deserves all the accolades he is getting," Breitkreitz.

And although Scarlett is obviously a skilled writer, his success in the Legion Poster and Literary Contest is a bit surprising in that he has achieved it in his first submission.

"It was my first time entering the contest but it will not be my last," he said, encouraging his peers to enter the contest. "Because you never know what you can do until you do it."