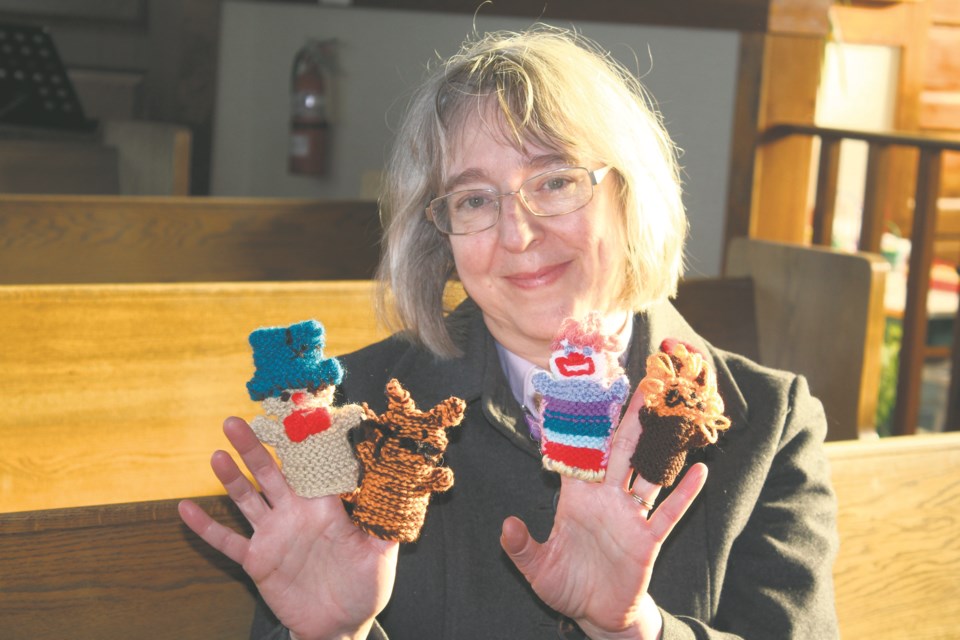 Athabasca United Church minister Monica Rosborough models a few of the finger puppets Mary Olson made for a church fundraiser. Olson is also encouraging youth to write a story about their puppets and submit to her for a contest she is organizing until Jan. 31. Heather Stocking/AA

ATHABASCA - When the COVID-19 pandemic hit in March and almost everything was shut down to help stop the spread, a local woman wondered what she could do to fill the time so, she started knitting finger puppets.

Athabasca’s Mary Olson wanted to spend her time in isolation doing projects, but when she opened her knitting drawer it was almost empty save for a magazine her mother had given her 50 years ago with patterns for finger puppets.

“It was a message from my mom,” Olson said. “I had an old magazine, and she'd written on the front of it ‘maybe someday you will want to knit these puppets’ and it was back in the 1970 and now of course, it's 2020.”

Now, eight months later, she has created about 700 finger puppets, with a little help from her church and some friends.

The Athabasca United Church offered wool and items for people to read or craft with during the pandemic so, Olson was able to get some wool there, she bought some of her own and other friends donated as well, so she started on her finger puppet project in memory of her mother as a fundraiser for the church.

So far, she has donated 80 bags to the church and will add 10 more to that, plus a Three Billy Goats Gruff set she did for a Kindergarten teacher. Her sister-in-law took another 20 sets, along with a few others who have reached out.

“It was a basic pattern in this book, but of course, in those days, they didn't have such things as Star Wars and Paw Patrol and all that. Of course, I did the Three Little Pigs and the Big, Bad Wolf; the old period deals,” she said.

“So, it’s just a variety of things; little boys and little girls or Christmas or Star Wars, the Charmin bears from that ad on TV, and then dancers. Just anything that I can come up with; a few Harry Potter.”

She said she can knit two puppets per day to keep her hands busy while she reads, but it is the decking them out to the theme she chooses that takes time.

“The actual knitting of them doesn't take long, but it's all the little features that take a long time; hair and all that kind of stuff,” said Olson. “It’s been something to do during this COVID business.”

The fussy stuff of hair and features has not slowed Olson down though.

“One hundred and thirty times five, what’s that? 650?” Olson said as she counted in her head how many sets she has made.

“I forgot, I’ve done another 20 or 30 for my great granddaughter so, that would be on top of that.”

The plot twist is that included in every package is an entry to a contest organized by Olson to have youth 16 and under author a short story about their puppets and submit it back to her by Jan. 31, 2021.

“I thought it’d be (nice) if the children want to take their five puppets and write an original story about these puppets,” she said. “Then I’ll have an independent party judge.”