Getting ready for spring seeding 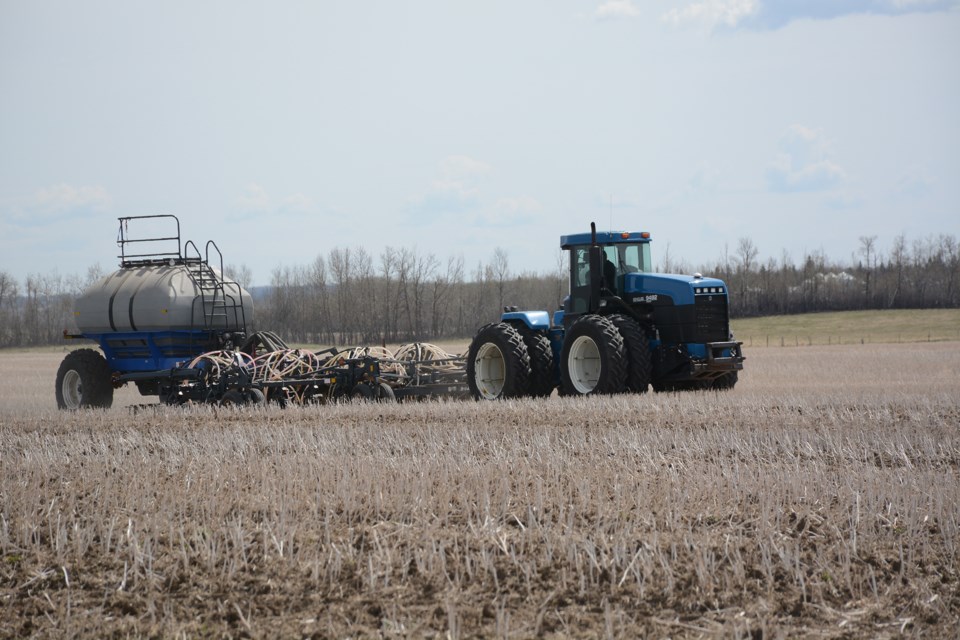 At this point, it’s hard to say when seeding will begin this year. This file photo shows John Dirks seeding his first field of hard red spring wheat in 2019 on May 9. There was some seeding done elsewhere in the area a bit earlier than that.

ATHABASCA/WESTLOCK/BARRHEAD – With more spring-like weather in the air, and after what seems like a long winter, farmers are feeling that age-old urge to be back out on the land putting in yet another crop. There’s been several bad years behind them, and a wet fall last year, with again some crops left unharvested. All hope that this will be a better year, in spite of the current corona virus concerns. Perhaps this will be the year when at least the weather will co-operate, and all phases from seeding to growing to harvest will go smoothly.

So what are the plans this year? Are seeding plans changed? Are there concerns over availability of fuel, fertilizer, chemicals or any other inputs?

We chatted with some farmers from across our Town & Country area this past week to get a sense of what may be happening this year. From Athabasca through Westlock to Barrhead, the farmers we talked with indicate it is pretty much staying the course with plans, with some exceptions, depending on the spring and how quickly the ground is ready for seeding.

Keith Guay, who farms approximately 4,500 acres with his son Justin west of Athabasca says they will continue with their “Plan A,” When we caught up with him, he was still drying some of last fall’s oats.

“We never changed last year and we’re not changing this year. We just try to do a good job of marketing,” he said. They grow canola, wheat and oats. “That’s kind of our rotation.”

As far as when they hope to begin seeding, he said you can’t predict that. It depends on the weather over the next few weeks. “We’re not changing any plans. We’re just going to do it!” he said. “I don’t care what the almanac and everybody else says, it is what it is. You stick to Plan A and do it, and it’s been working for us. We’re not changing any plans. The whole world’s upside down now; the economy’s upside down.”

But as far as farming, he still talks positive. “We’re still pretty well off. There’s always somebody that’s worse off than you are.”

As far as inputs, he said that’s all in place already, and noted that fuel prices currently down somewhat has helped a bit. “There’s some good that comes out of the bad.”

“Farming, in my life, has always been a positive attitude towards it; whether we were making money or not. It was always positive, and our kids grew up with that too. And we have to be positive through this hiccup that we’re going through with this Covid thing.”

David Hall farms with his father Bill between Jarvie and Long Island Lake. He’s a fourth generation farmer, with part of the land the original homestead of his great-grandfather, where both he and his parents have their homes and the main yard.

He said he has 140 acres he feels he may not be able to crop this year – just simply too wet last fall. “It’s down in the peat moss and there’s about 40 acres of barley I couldn’t get.”

“Other than that, the plan is, it’s business as usual.”

They crop about 2,000 acres – a mix of canola, wheat and a little bit of barley, David said, “Unless it’s too wet; it might be a little more barley.”

“It’s going to be a late spring, for sure,” he predicts. He figures three weeks to a month, which would put it around mid-May, depending on the weather. Like others, he said crop inputs don’t appear to be a problem.

John Guelly, Chair of Alberta Canola Commission farms 900 acres south west of Westlock. He says his plans haven’t changed this year. “All my anhydrous went on last fall, so that kind of dictates what crop I put in.”

He said he crops about a third each of wheat, malt barley and canola in a three year rotation and not planning to make any real changes.

Like the others, Guelly doesn’t see any problems with inputs, especially with agriculture being declared an essential service earlier.

“The biggest concern right now is if some of the retail work forces happen to get sick and they’re not able to deliver product to the field,” he noted.

Richard Mueller and his son Rick are pedigreed seed growers east of Barrhead (Rick’s Pedigreed Seeds). They crop about 2,000 acres in a five year rotation of wheat, oats, barley, canola and peas. “We’re pretty much the same year after year, We’ve got to keep out rotation going. If we don’t, we’re in trouble,” he says. “That works out for us, because in that five years, there’s always a chance that might be a new variety of barley or wheat or whatever that comes out, and that gives a break so that we can seed into it.”

As far as when they will be able to get on the land, he says simply, “Late Easter, late spring, so we’re probably going to be later than I’d like to see, but that’s o.k. As long as we get the fall that coincides with it.”

“We’re ready for a good year,” he says, reflecting on the past four years of difficult harvest times. He did note the lack of warm sunny days last year didn’t help.

Bottom line – if the cross section of farmers we talked with are an indication, it appears cropping plans are pretty much already set. That doesn’t take into account those farmers in some areas that still have crop to take off from last fall. Depending on when that can be accomplished, and moisture conditions in the field, there may be changes there. One thing with farming, it’s never an assured thing, and farmers are generally flexible when and where they need to be.