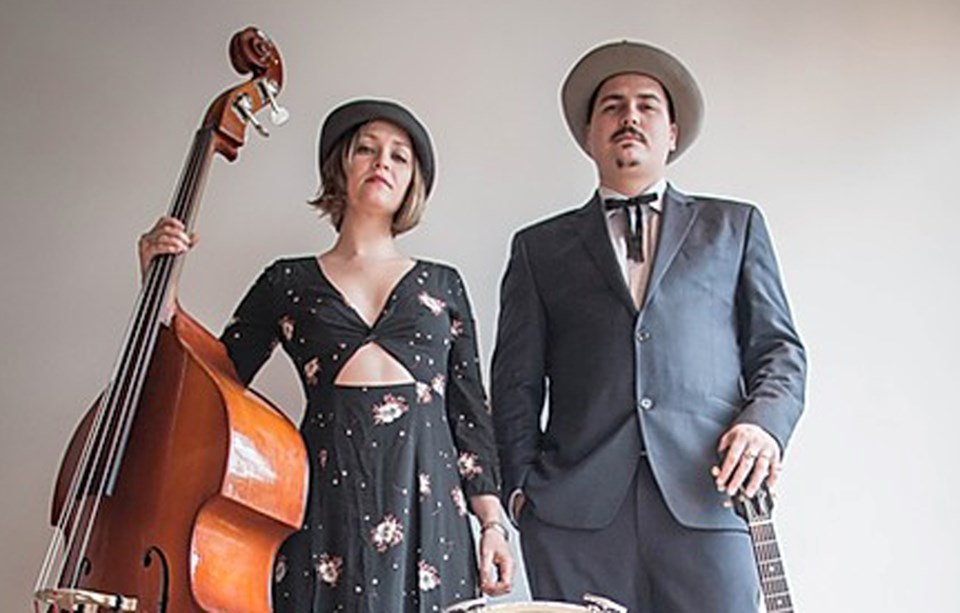 Jasmine Collette and A.W. Cardinal, also known as Blue Moon Marquee, will take the stage at the CATS Theatre this Friday, Feb. 7, giving Westlock music fans the full blues experience, bringing their own brand of delta, swing, folk and country blues to town fresh from their appearance at the International Blues Challenge in Memphis last week.

WESTLOCK - The blues is alive and well and the next performer in the Culture and Arts Theatre Series will prove it as they take to the Westlock stage tonight, Feb. 7.

Alberta-born vocalist and guitarist A.W. Cardinal and multi-instrumentalist Jasmine Collette (a.k.a. Badlands Jass) promise a spectacle of a performance in a show like you’ve never seen before.

“I promise you have never seen a show like it. The world is becoming a Netflix hologram, but can’t outmatch a live jamboree like us yet,” said Collette via e-mail as the band prepared to perform at the International Blues Challenge in Memphis, Tenn. last week.

The challenge sees blues societies from all over the world hold local competitions and whoever wins moves on to a regional competition and then the winner there then travels to Memphis to compete with artists from 17 other countries.

“Neither if us really dig the whole ‘battle of musicians’ thing, we just want to play, but we decided to go for it,” said Collette.

The Westlock show will be a little smaller, little more low-key and a little more intimate of an experience. The CATS Theatre is obviously not quite a smoky, old dive on the wrong side of the tracks, but between Cardinal’s Tom Waits-esque vocal style and Collette’s simultaneous work on harmonies, stand-up bass and the kick drum, snare and high hat, you might be transported there.

“We love playing small theatres. And we both grew up in small town Alberta, so we are very comfortable and feel at home,” Collette said.

The combination of the influences of blues musicians from the last century come through in their music, but they are particularly partial to the New Orleans sound, the swinging jazz and blues of Count Basie, Willis Jackson and Howlin’ Wolf.

“It feels like we stick out a bit as the odd kid at the party at many blues festivals because we like that older swingin’ style,” said Collette.

Most of their crowds are 40-plus and usually more like 50 or 60-plus, “which is not a bad thing, but hopefully we can get some younger kids interested and start back at the beginnings of the blues.”

The band is often approached by the younger generation though, who never even knew they liked the blues because all they ever heard was “Dad’s mall rock blues and the tired 12-bar shuffle.”

The blues will survive and are indeed alive and well, said Collette.

“They say blues had a baby and named it rock and roll. All the great rock and roll, metal and punk bands came from the blues and all that stuff is wonderful. Both Al and I used to play in punk, metal and rock and roll bands. It just seems like often now the blues bands all sound very similar, and usually it involves really long guitar solos with a very rock tone. We prefer to stay closer to the roots.”