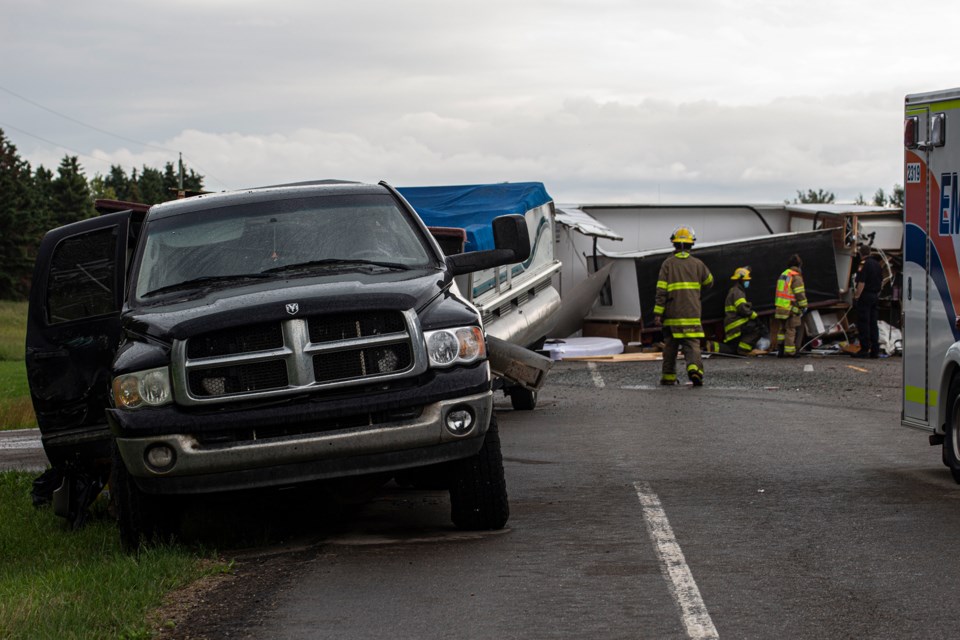 The scene of a July 23 accident on Highway 44 near Dapp. The truck towing the holiday trailer swerved to avoid a crash with a vehicle in front, and the entire trailer spilled onto the road. Only minor injuries were reported. Andreea Resmerita/T&C

WESTLOCK — No serious injuries are being reported following a two-vehicle accident involving a truck pulling a holiday trailer just north of the turnoff to Dapp on Highway 44.

Emergency crews, including RCMP, ambulance and town and county-based firefighters, were called to the crash scene roughly 26 kilometres north of Westlock just after 2:30 p.m. July 23.

Nine people, including a handful of children, were involved in the crash. Two people had to be extricated from a vehicle.

Both vehicles had been heading south at the time of the accident.

“One vehicle was turning left that was southbound, waiting for traffic and another vehicle from behind traveling the same direction rear-ended the vehicle that was turning left,” explained Westlock County manager of protective services John Biro.

The vehicle behind, a truck, was towing a trailer and a boat. When the driver swerved trying to avoid a crash, the truck ended up on the side of the road facing north, but the trailer detached itself from the base and spilled onto the highway, covering more than half the road. 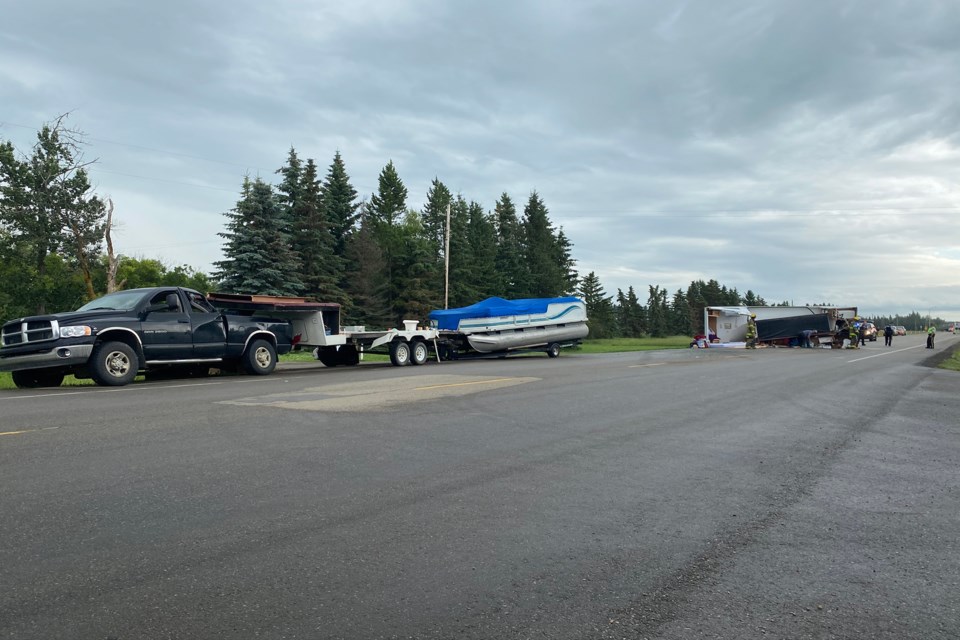 The truck that veered and the trailer it had been towing that ended up splayed out on the road, just after emergency crews cleared the scene. Andreea Resmerita/T&C

“That’s why you don’t travel inside those things,” commented an RCMP officer at the scene.

Two people were trapped inside the truck—not pinned—so Town of Westlock assisted with extrication.

“We just couldn’t open the doors due to the collision,” said Biro.

It didn’t take them any more than 10 minutes to remove the door and get them out. They only suffered minor injuries.

The SUV in front ended up in the ditch—the occupants, Biro said, suffered no injuries but were shaken up. Everybody was wearing seatbelts. 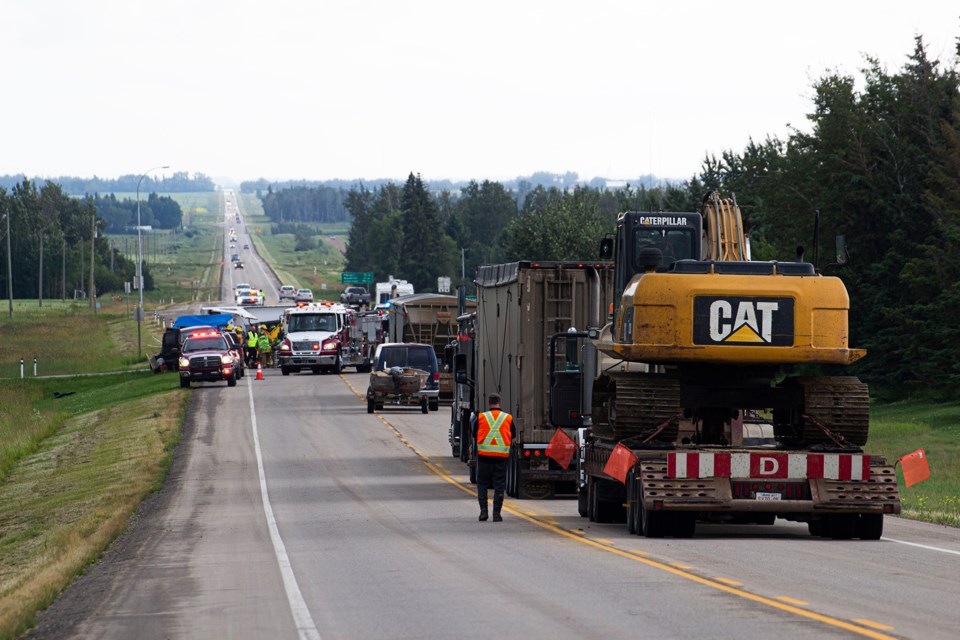 The view of the accident facing south, with some vehicles stalled. The two semi trucks would soon be allowed to pass. Andreea Resmerita/T&C

Traffic in both directions on Highway 44 was stalled until about 7 p.m., at first while emergency crews were dealing with the patients and assessing the scene.

“We had to have tow trucks and figure out how they were going to load this RV, so we had to shut down the highway,” Biro said.

Since the accident was only about 200 metres north of Highway 661, the Dapp turnoff, the county peace officer was able to quickly divert northbound traffic that way. Southbound, however, a few trucks and trailers were trapped waiting on the road between the scene of the crash and the Dapp Corner Store. 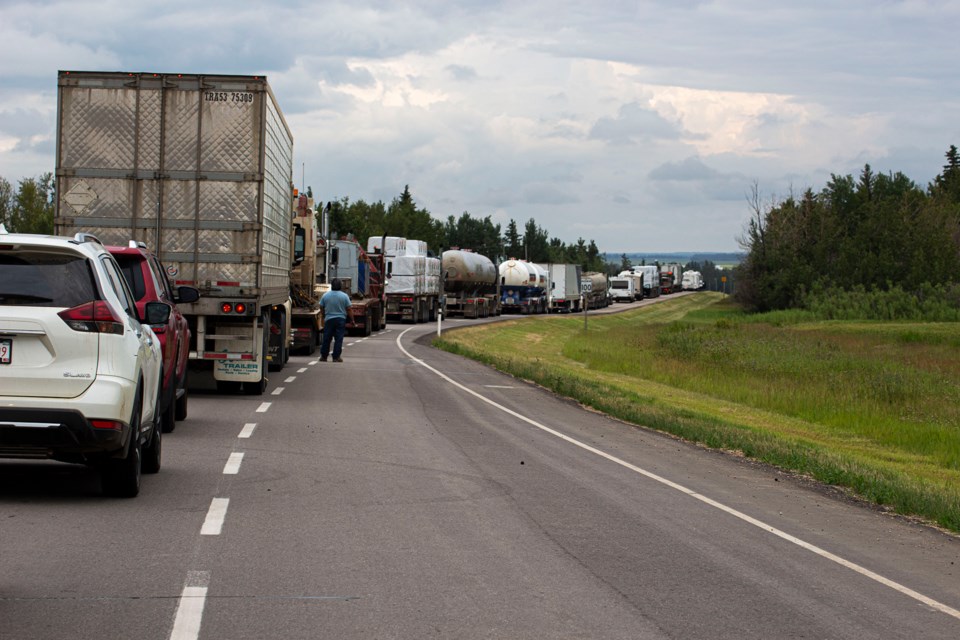 Stalled southbound traffic at around 4:30 p.m., about two hours after the crash. Further north, near the Dapp Corner Store, crews had set up a detour via Township Road 622. Andreea Resmerita/T&C