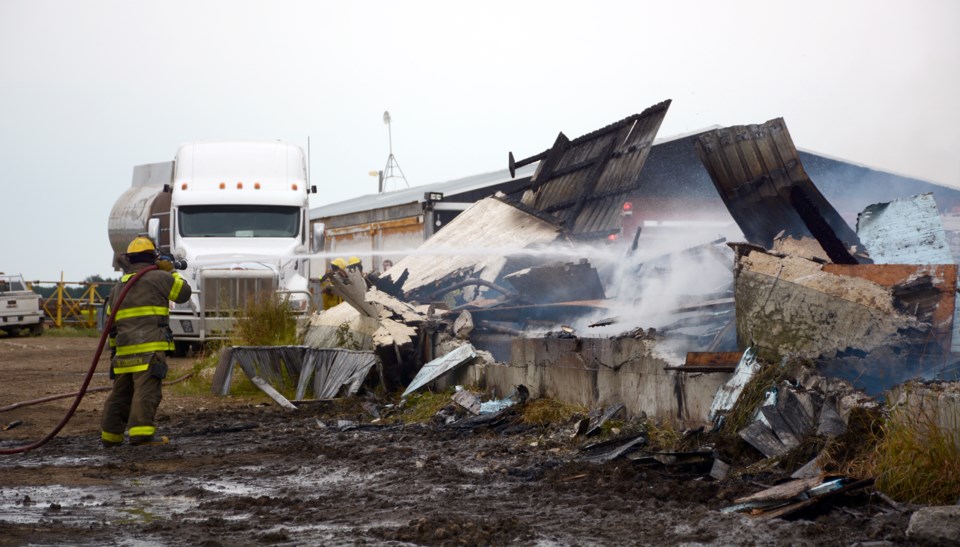 WESTLOCK – A discarded cigarette, or some other smoking material, is being blamed for a July 16 fire that consumed an unused 8,400-square-foot hog barn on the Pibroch Colony.

Nearly one-third of Westlock County’s firefighters responded to the Friday-night blaze 25 kilometres north of Westlock that razed the empty 60-by-140-foot farrowing barn, a 32-year-old structure that had been scheduled for demolition. John Biro, the county’s manager of protective services, said the call came in right around 5:53 p.m. and they responded with as many members as possible due to possibility of the fire spreading to nearby structures.

“We had approximately 28 firefighters respond to the call and we have on the roster right now probably around 70. So, with the holiday season, the size of the building and the possibility of other structures being lost we had to go full out. Better safe than sorry,” said Biro in a July 21 interview.

As for the cause, Biro said it appears a discarded cigarette or something similar, is to blame.

“There’s no power or gas going to the building, so it was obvious it was smokers’ material. Nothing suspicious,” he said.

“It is dry, but we did have some moisture so we’re sitting relatively safe. Of course if we get an undetected lightning strike that hits in heavy populated spruce, or black spruce it could cause us problems if things do dry up further,” Biro continued.

“All we can ask the public is that after a storm goes through if they can monitor the horizon and if they smell a strong odour of wood burning to definitely call it in.”

The recent cooler temps, combined with the continued haze from the B.C. forest fires has also helped keep conditions in check.

“And we’ve got a lot of humidity right now which helps things. Even for this past structure fire, with it being overcast and the smoke that definitely helped. The RH (relative humidity) was 70 per cent, which is pretty high for that time of day,” said Biro.

Campfires in registered campgrounds with designated fire rings and backyard fire pits are allowed and burn barrels are also OK, but have to be constructed of non-combustible material, free of damage, covered with a tight-fitting metal mesh screen with openings not more than six millimetres in size, located on a non-combustible material base, and located at least three metres away from any combustibles. As a note, burning prohibited materials in a burning barrel is banned and so is using one in a hamlet.

ATVs are also allowed so long as they’re equipped with an exhaust muffler that complies with current Traffic Safety Act regulations.

On its website, the county urges everyone to use extreme caution when working or driving in grassy areas, be mindful of hot exhaust and keep vehicles clean and free of debris as smoldering debris can fall off and start fires.

“People are being really good out there, we haven’t had any problems,” Biro concluded.

More details on the restriction can be found on the Westlock County website.