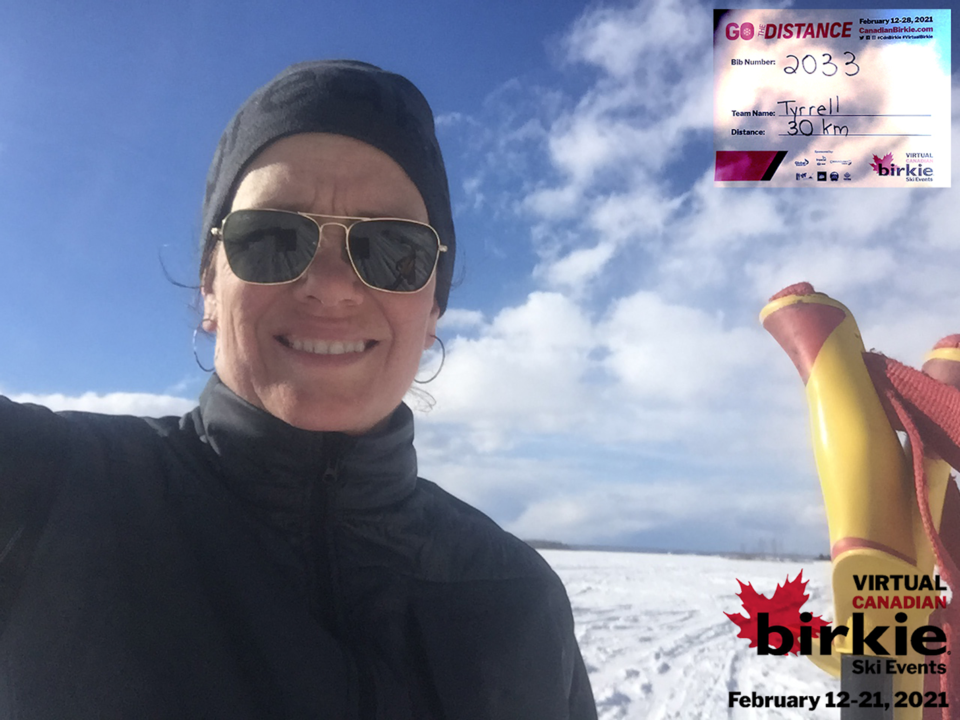 Anne Marie Tyrrell takes a selfie at Thunder Lake after competing in the 30-kilometre category of the Canadian Birkenbeiner Ski Festival. Due to the pandemic, this year's event was held virtually.

BARRHEAD-It has been something Anne Marie Tyrrell has wanted to do for several years, to compete in the Canadian Birkenbeiner Ski Festival. Unfortunately, life kept getting in the way.

The race (affectionately referred to as the Birkie) is patterned after a real historical event. In 1206, during a civil war, a pair of Norwegian warriors smuggled the king’s son out of the palace and skied the infant to safety, travelling a great distance.

In the modern version, the Birkenbeiner is a long-distance ski race, with distances ranging from two to 55 kilometres, starting at the Ukrainian Cultural Village about 30 minutes east of Edmonton. The race has been taking place since 1985.

This year, due to the pandemic, the organizers changed the format to a virtual event where participants could classic ski, skate ski, roller-ski, skijor, cycle, run, ice skate, snowshoe, or walk a distance of four, eight, 13, 30 or 55 kilometres at a location of their choosing. Participants were then invited to share a picture and story commemorating their participation on the event's website.

"[The Birkie] is something I've always wanted to do, but my family is involved in hockey and I could never get to the venue," Tyrrell said.

However, she said the change due to the pandemic allowing participants to take part at the venue of their choice made participating much easier.

The last year has been especially rough on the Tyrrell family. She recently lost both her parents within two months of each other after contracting COVID-19.

As a result, she was looking for a way not only to help herself through a difficult time but to do something to honour her parents. So when she saw an advertisement that the Birkie had gone virtual, she knew it was something she had to do.

"My dad was born in Norway and taught me how to ski so I thought this would be a great way to honour them," Tyrrell said.

Tyrrell chose the paths in Thunder Lake Provincial Park near the boat launch. The path system loop, which weaves through the hilly forest before coming back to follow the lake, is approximately seven kilometres long.

She started preparing for the event by completing the loop but decided it was not enough of a challenge. She determined that racing in the 13-kilometre category (or in her case 14 km), by completing two loops would be more appropriate.

However, after completing the two loops at Thunder Lake, Tyrrell decided that she compete in the 30-kilometre category by completing four loops of the course, something she did on Feb. 20.

Tyrrell's sons, David and James, have also signed up to complete the Birkie in the four-kilometre category.

"The Birkie is kind of the pinnacle for cross-country skiers and preparing for it has been a wonderful release and I am so happy that I finally had a chance to do it," she said.