Barrhead Regional Fire Services looking to use sea can apartment building to improve training for firefighters outside their own department
Feb 23, 2021 11:00 AM By: Barry Kerton 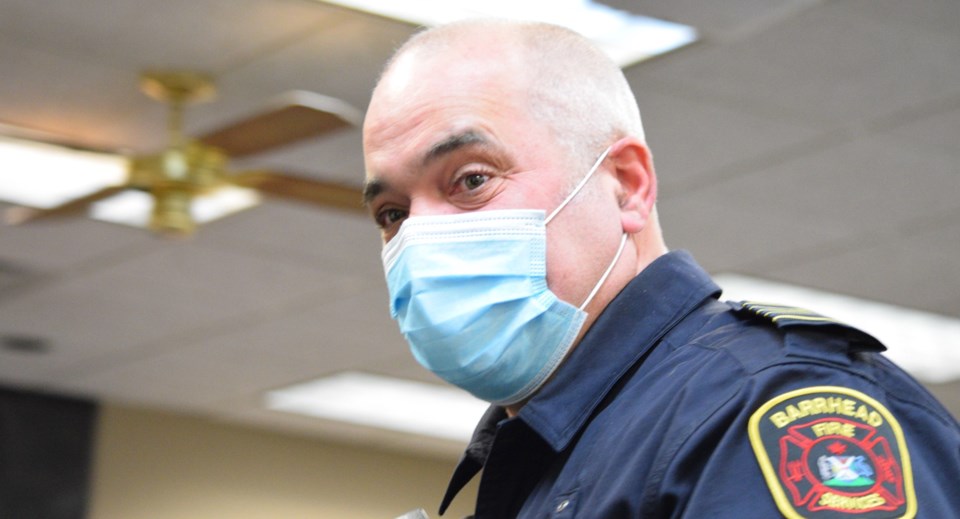 Barrhead Regional Fire Services chief Gary Hove said they might be able to start training other fire departments, thanks in large part, to the addition of the department’s new sea can training structure. Barry Kerton/BL

BARRHEAD-The Barrhead Regional Fire Services is hoping its sea can apartment complex can bring the department some additional revenue and train its members.

For more than two years, the fire department has been creating a fire training structure using metal sea cans. Currently, the "sea can apartment complex" is three stories high and consists of 10 shipping containers.

Fire chief Gary Hove told Town of Barrhead councillors during Feb. 9's council meeting that he is exploring the possibility of renting the facility to other fire departments and private companies in the oil and gas sector for their industrial firefighting training courses.

"I have had an [energy company take a look at [the sea can apartment] and there may be more that are interested," he said.

Hove was at the meeting to answer questions regarding changes to the Fire Services Bylaw.

"[The apartment complex is a joint effort between the town and county and BRFS members, who put in a lot of effort to build it," he said.

Hove added the structure was part of the department's ongoing efforts to expand their in-house training program.

"We've put in a lot of effort into improving and upgrading our training program," he said, adding the BRFS also has its own certified trainers.

Not only does having an in-house training program result in better-trained members, but Hove also said it is more cost-effective.

He used the example of a high-angle rescue course, one of his instructors recently completed.

"Although the course cost $6,000, we will now be able to train our firefighters at $45," Hove said. "It is about training and evaluating our people and stretching our training budget as far as possible."

In the spring, he also noted that BRFS will be hosting an aerial fire truck training course in conjunction with the Westlock Fire Department in preparation for when they receive their ladder truck.

Notable changes from the old bylaw is that the Barrhead Regional Fire Services (BRFS) will no longer charge for subsequent fire inspections for business, permits are no longer required for properly-installed fire permits and recovery charges would only be charged for false alarms when the department responds to three or more calls.

Hove said the reasoning behind all the changes is that they did not want the bylaw to be a deterrent to fire safety.