Panelists speak on group's mission to keep university jobs in Athabasca
Jun 9, 2021 11:00 AM By: Chris Zwick 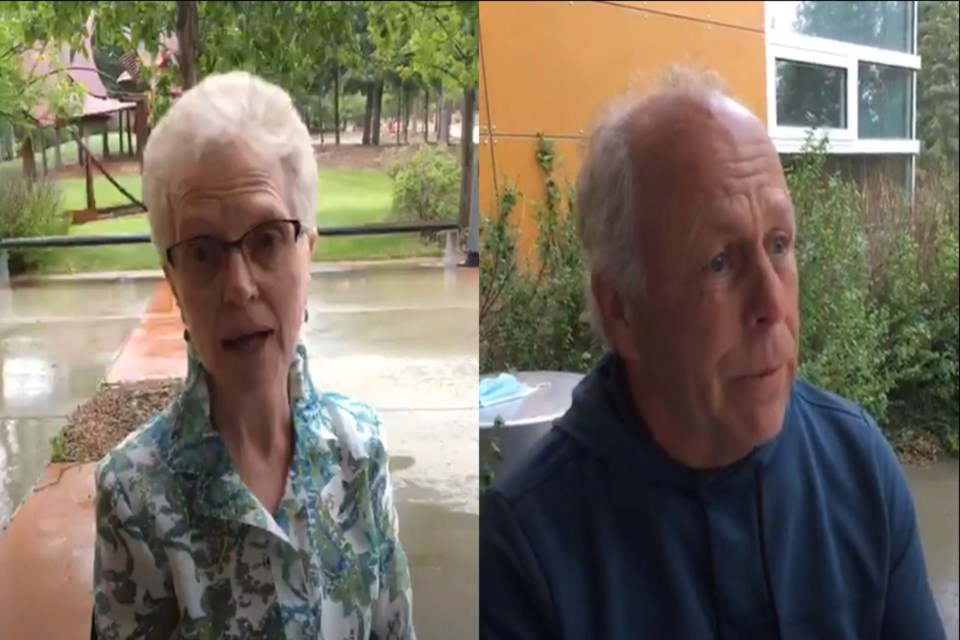 Former AU professor, director at the School of Business, and director of administration Mavis Jacobs and former Board of Governors member and current Athabasca town councillor Rob Balay took part in a June 4 Facebook Live panel organized by the ‘Keep Athabasca in Athabasca University’ community group to answer questions from the public and talk about the group’s mandate to keep jobs in Athabasca.FB Live screenshots

ATHABASCA – The ad-hoc community group behind the ‘Keep Athabasca in Athabasca University’ campaign provided an opportunity for members of the public to get a better sense of their motives with a question-and-answer session last Friday.

The interview was broadcast on Facebook Live and hosted by group member Natasha Kapitaniuk and included two local individuals familiar with the inner workings of the university. Mavis Jacobs is a former professor and director at the School of Business and the former director of administration for the university, while Rob Balay is a current Town of Athabasca councillor and a former member of the AU Board of Governors who finished his second term on the board in 2020.

A rainy night made for a poor Internet connection, but Jacobs and Balay were able to answer several questions from the audience to clarify the group’s position, and provide some background on what they hope to achieve.

Jacobs said there have been “pockets of concern” in the community about the number of physical jobs at the local campus for several years, and many letters were written long before the current campaign got underway just over a month ago.

The near-virtual model being employed as part of Athabasca University’s strategic plan is at the heart of the group’s campaign as it will decrease the number of local jobs at the university, they say, and will hit Athabasca hard as new hires are given the option to work from anywhere.

“We've been aware that this is been happening for a good six months that there's been a plan and a move to go to go to near-virtual, and it became obvious that this could potentially have a huge impact on our community so a number of us got together and said, ‘What can we do about this? So, we started a group we started getting community awareness,” said Balay. “We’re hiring a lobbyist to help us take our message to the government, to the decision makers, and to the Board of Governors, and that's where we're at and we're here to bring more awareness tonight,” said Balay.

Both panelists also pointed out the university was brought to Athabasca as part of a rural sustainability effort by the Alberta government in the early 80s, and the near-virtual plan will not only go against the original intent of bringing the university to town, but will be a huge hit to the economy in the region.

The group wants to see Athabasca-area residents given priority for employment opportunities, wants the new president of the institution to live in the immediate region, and wants a position to be on the board of governors to be filled by someone from Athabasca.

Balay sat on the AU Board of Governors when the current strategic plan, which will run its course in 2022, and the notion of a near-virtual future came forward, but the push towards near-virtual only really picked up steam in the last few months, he said.

A space needs assessment was done in 2019, which led to the idea of consolidating the Edmonton offices and still remain semi-virtual, but it seems COVID-19 changed everything.

“Five months later COVID hits, and at that point, everything moved very, very quickly, and we weren't sure if the decisions were then we have to go all in, or not at that point, and, and it moved so quickly, and I think we need to pause and step back and find is that the best decision for Athabasca University,” said Balay.

“AU was focused on not renewing the office leases in Edmonton and Calgary and it made real economic sense to not renew those leases and have those employees work remotely or for those that absolutely need a physical space to relocate to the Athabasca campus. There was no emphasis at that time on the Athabasca employees to work remotely or from home offices. The board was assured that no jobs would be lost at the Athabasca campus. Those plans have obviously changed though.”

Jacobs will be taking the group’s pitch to Athabasca County council Tuesday to explain their position further, after council declined to provide funds to the group as part of their efforts to hire a professional lobbyist at its last meeting. The group is hoping for support from the county and from the people of the region as a whole.

“We can write letters, we can phone our MLA, we can definitely contact the provincial government ministers and Premier, we can contact our county councillors and affirm your position, even with town councillors, but share the information with your friends and family as well, and do it broadly, don't limit it just Athabasca. This is an Alberta-wide challenge,” Jacobs noted.