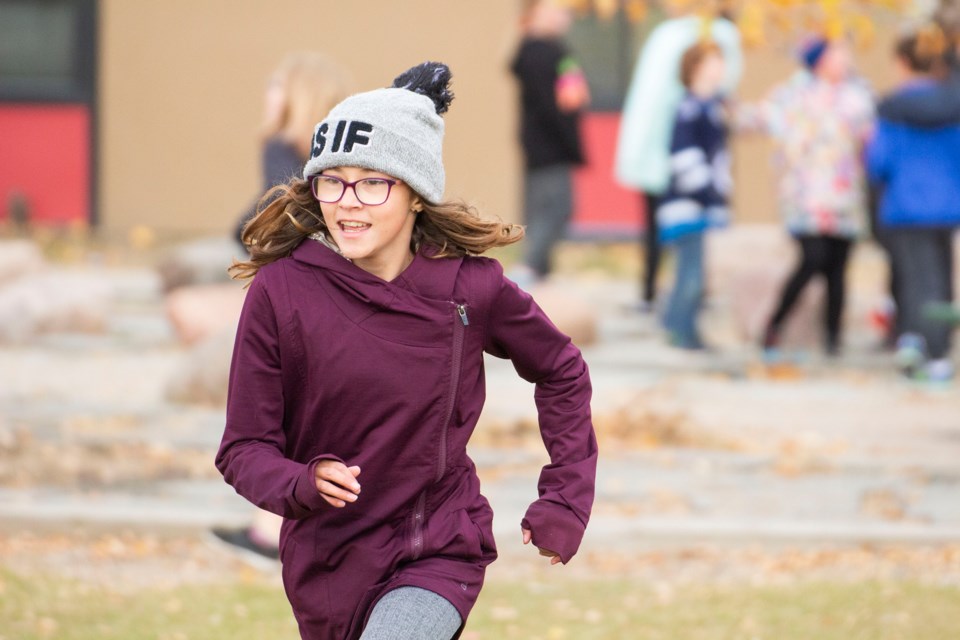 No mask during recess at Westlock Elementary School for Lorelai Kostiw. Andreea Resmerita/WN

WESTLOCK — Things are different these days at Westlock Elementary School, but at least learning is still happening like it always has and for that, principal Pierre Ouimet is grateful.

In a K-6 school, you’d think it might be harder to convince kids that masks have to stay on inside or that they can’t play with their buddies in the other classrooms. Ouimet, however, that wasn’t much of a challenge.

“The kids have been amazing at all grades in terms of our rules, our protocols and lining up and distancing and when are the masks required, when are they not,” he said.

At recess, they’re allowed to take them off when they go outside. They’re distanced there too, with their cohorts. When they go inside, they line up and the older kids, Grades 4 and up, pick up their masks from their individual trays.

They’re the only ones required to wear them, but Ouimet says a lot of the younger ones do too. He hasn’t had to make many adjustments to how they implement the Alberta Health Services guidelines since school started: “We’re following (them) to a T.”

Learning hasn’t changed either — from books at least. Class sizes got a bit smaller because about 70 kids’ parents decided to keep them home, most for online school and some for homeschooling. It’s the only silver lining to COVID. On average, there’s about 20 kids per class, at most 24 kids, whereas normally they would’ve had a few in the 26-28 range.

Other things, though, they’re a little strange.

“Probably one of the biggest changes that I’ve noticed (is) not allowing parents and guardians and grandparents and people visiting and volunteering in the classrooms. We don’t do that anymore. That’s a big change for us,” said Ouimet.

There’s all sorts of disruptions to typical programming. Ouimet went back to the government’s terminology in Scenario 1, return to school: “I now am using my quoting fingers because that’s what they put in the documentation is ‘near normal.’

“Well, the near normal part is that we have kids in the building in person. The learning and the curriculum outcomes and all that is normal. But there’s still many things that are not normal. Like we can do an Orange Shirt Day because we can, though we couldn’t take a group photo. With or without masks, we wouldn’t have been able to do a group photo of everybody who participated,” he said.

“I’m glad they put quotation marks around it because many of our structures and routines and things that are really good for programming and really good for kids, we can’t do anymore. We can’t do buddy classes, we can’t do assemblies, … kids when they have their birthdays, they’re not allowed to (share) snacks and treats and stuff like that.”

But at least they’re back in-person: “I’m grateful,” said Ouimet.

The school also “revamped and rejigged” the breakfast program with the help of “folks in the community.”

“Out of all the cuts that were made by the government in some areas, one of the grants that they did keep, and it’s optional for schools to participate, they call it the Nutrition Program,” said Ouimet.

“That’s one noteworthy thing that because of COVID — COVID kind of has to come into every part that we do — it looks a little differently than what we used to do in the past.” They’ve closed the breakfast nook, for one, and all food is individually wrapped and served by one parent volunteer.

One of the most difficult things, Ouimet said, has been staying home when showing symptoms because there’s so much overlap with normal seasonal afflictions.

“In the case of a K-6 school, most every kid has a runny nose,” he said, so it’s odd for parents to pull their kids out of school, have them tested, and wait for the test results before they can come back. Objectively, it interrupts what should be continuity of learning.

County of Barrhead writes off $450,000 in taxes and penalties from three energy companies
Oct 28, 2020 9:00 AM
Comments
We welcome your feedback and encourage you to share your thoughts. We ask that you be respectful of others and their points of view, refrain from personal attacks and stay on topic. To learn about our commenting policies and how we moderate, please read our Community Guidelines.