Linaria Hall gets $9K boost from 100 Women Who Care 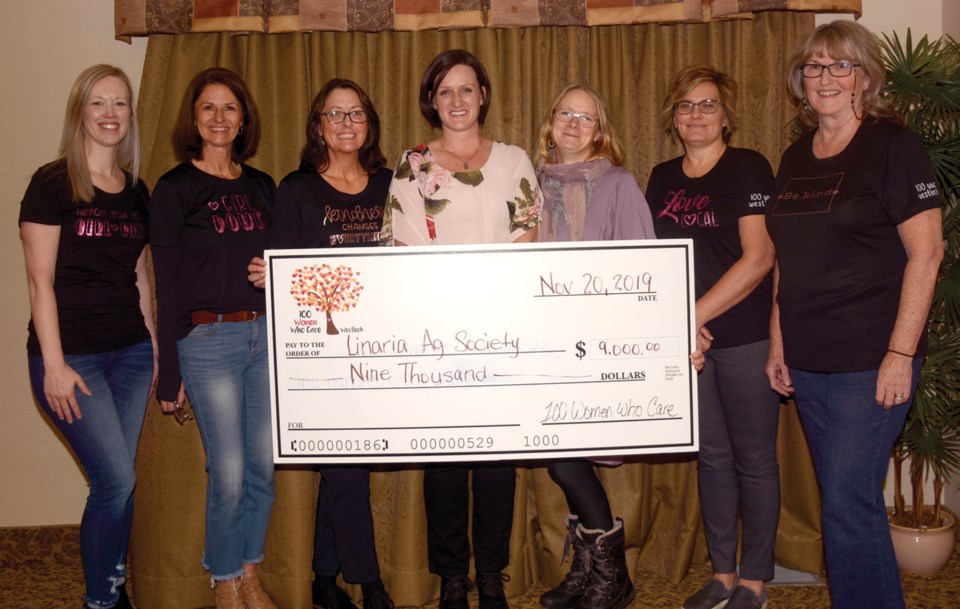 The Linaria Hall was the latest recipient of 100 Women Who Care Westlock funds, presented to Linaria Ag Society Community Hall board secretary treasurer Coralee Borst at centre, along with director Cory Kubinec Nov. 20. Presenting the cheque on behalf of the 100 Women Who Care are at left, Kourtney Nelson-Bernard, Deneen Ducharme, Tammy Round and, at far right, Denise Boulerice and Sue Dougans. Les Dunford/WN

WESTLOCK - For Linaria Hall, the No. 13 proved to be lucky when the 100 Women Who Care held its 13th evening of giving back to the community Nov. 20 at the Ramada Inn in Westlock.

It was a very close vote, with three votes separating the top from second place and three votes between second and third place; an indication of the value the women placed on all three requests.

Presenting on behalf of the Linaria Hall board, which is one arm of the Linaria Ag Society, was Coralee Borst, secretary treasurer. The ag society is  the umbrella group that looks after the Linaria Hall, curling rink, seniors drop-in centre and the arena. Funding, however, was being sought specifically for the hall. Borst noted it was people like her father Dave Armstrong, who recently passed away, who believe in their community and “put in endless hours of volunteer time to make the community strong, supportive and a place of gathering.”

She said the Linaria Hall was built in 1930 and over the years has hosted events ranging from dances, to weddings, bridal and baby showers, reunions, Christmas concerts, funerals, and club events like 4-H and hockey.

“The hall has been lovingly maintained by endless hours of volunteer support,” she  said, adding that many improvements have been made over the years and continue to this day.

Currently the group is looking to maintain the hardwood floor, which requires attention. If enough funds were available, she said they would like to look into updating the linoleum as well.

“It is our desire to maintain the beautiful hardwood to keep the uniqueness of our hall.”

Borst noted the various events they host yearly to raise funds to keep the hall in good shape and any dollars they got from the group would allow them to continue to provide a gathering place that is respected and valued in Linaria.

She said the floor work will cost about $5,000 and any extra funds available would be used for the linoleum.

Women present and those voting by proxy obviously recognized the Linaria Hall worthy of their support, and the $9,000 available went to that cause.

Helping the community since 2016

This was the 13th time the group has funded various community organizations, with their first event held in November 2016.

Since then, quarterly donations to 12 groups has amounted to over $130,000, noted the evening’s MC, Kourtney Nelson-Bernard — the most recent donation takes to the figure to roughly $140,000.

Groups receiving funds since the beginning include: Westlock & District Food Bank, R.F. Staples Breakfast Program, Westlock & District Palliative Care, Homeland Housing, Hope Resource Centre, Camp Mackinicholea, the Pembina North Community School sensory space, Tawatinaw Valley Ski Hill, Quilting From the Heart, Busby Fire Department, GLOW (Girls Leading Others Wisely), the Jarvie Fire Department and Linaria Hall. Names of groups who present, but are unsuccessful in receiving funding, are put back into the draw box and may have the opportunity to make their request for funding again in the future.

The 100 Women Who Care  movement idea was brought to Westlock by Deneen Ducharme. She learned of the program elsewhere, and thought it would be an idea that would work locally. Basically, members commit to a $100 donation every three months, plus a small fee to cover costs. At each of the meetings, three groups seeking funding (nominated by women within the 100 Women Who Care) are selected to make their presentation. After the presentations are made, the women cast their ballots for the group they feel most worthy for funding, while absentee members can vote by proxy.

The concept is simple and as the organizing group note, they are always ready to accept even more members.