Favourable pricing might allow municipality to look at other paving projects
May 3, 2021 1:00 PM By: Barry Kerton 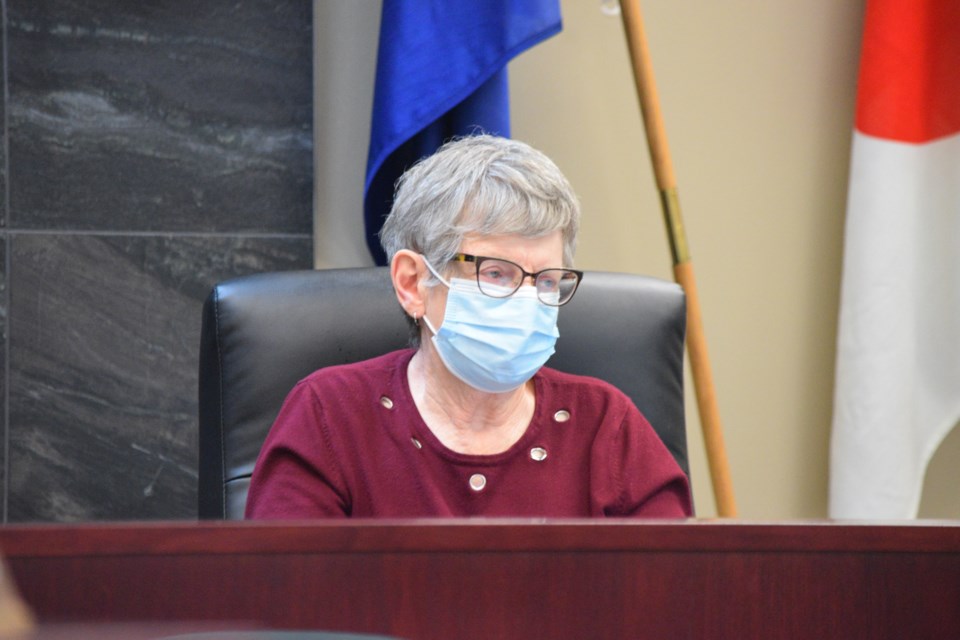 Town of Barrhead Coun. Leslie Penny suggested that the construction on Main Street projected to start in early June should be done one block at a time to minimize disruption to businesses. Barry Kerton/BL

BARRHEAD-The Town of Barrhead might be able to complete additional paving projects thanks to favourable pricing they received for the Main Street revitalization and 45th Street overlay paving projects.

Councillors unanimously awarded a $499,630 (not including GST) to E Construction, an Edmonton-based company with divisions in Fort McMurray, Cold Lake, Saskatchewan and the North West Territories, during their April 27 meeting.

Chief administrative officer Edward LeBlanc noted the funding for the project in 2021's draft Capital Budget was set tentatively at $894,430. It will be paid $544,300 from the Municipal Stimulus grant and $350,130 from Municipal Sustainability Initiative (MSI) program.

The Municipal Sustainability Initiative was introduced by the province in 2007, as a way to help municipalities fund local infrastructure projects.

In July, Premier Jason Kenney announced a total of $1.1 billion in funding will be going to municipalities and Métis settlements to help them with infrastructure projects that would have been delayed due to the coronavirus pandemic, as well as help these governments with their operating costs in the midst of the crisis.

The municipality's allotment is $544,302. The allotment municipalities receive is calculated using a similar formula as the federal government's gas tax program.

The rehabilitation of Main Street includes repaving the road and construction of the sidewalks. The 45th Street overlay will see a one-block section of the road upgraded (from 50th to 51st Avenue) from gravel to asphalt.

Chief administrative officer Edward LeBlanc said when all the costs are added in, such as engineering, the removal of some trees on Main Street and hydro-vac excavation for 45th Street, the combined projects are anticipated to come in $237,637 under budget.

"Our [public works director Brant Ross] has some ideas of other potential overlay projects and will do an assessment," he said, adding the results of that assessment could come back to the council for their consideration as soon as May 11's meeting. "

The savings would be from the MSI funding, as the municipality had already committed to spending the MSP grant on the previously mentioned projects.

LeBlanc also noted that the council could also defer using a portion of the MSI grant funds until 2022.

Coun. Ty Assaf noted the construction company plans to begin mobilizing for the projects in early June with completion being slated for no later than June 30.

"Just looking ahead, but do we have any contingency plan to help mitigate the disruption to downtown businesses for the start of what hopefully is the busy spring/summer season?" he asked. "What happens if there is a delay getting [Main Street] up and running again? I hate to see what we experienced the last time."

Assaf was referring to was the 50th Avenue infrastructure and road rehabilitation project in 2018, which saw portions of the street ripped up for more than four months.

In his previous discussions with Ross, LeBlanc said he was told that the estimated period of disruption for Main Street would be about seven days.

"As far as a contingency for the length of work, I am not aware of one, but we do have a contingency fund of $50,000 in terms of the budget," he said.

Assaf then suggested that the municipality could add a stipulation in the agreement with E Construction to guarantee that construction would take only a certain amount of time.

"If they go over that, there should be some sort of compensation," he said.

LeBlanc responded at this point, including such a stipulation would be unlikely.

"But we could ask the construction company to coordinate with us to ensure the least amount of disruption," he said.

Mayor Dave McKenzie interjected that the municipality should, at the very least, be able to come up with a parking plan to ensure residents could still access Main Street.

"I'm not sure how we would be able to manipulate the area to ensure customers can still access businesses," he said. "I am not sure what it would look like, but it should be something we can look at."

"It might be possible, but I know for some projects they like to do the whole street at once, but again, it is something we will look into," LeBlanc said.