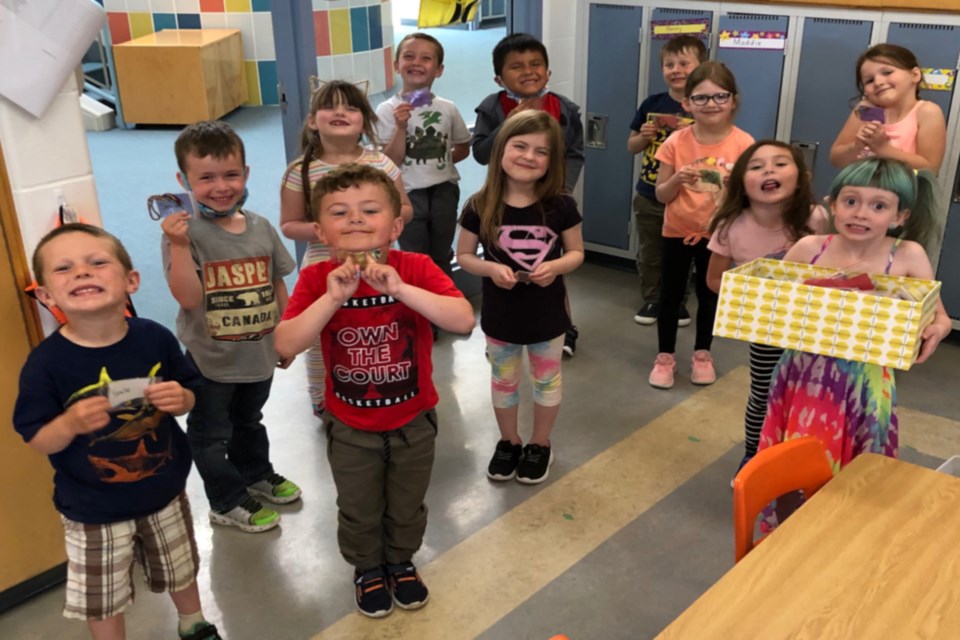 When classes resumed at Whispering Hills Primary School in Athabasca May 25 five-year-old Maddie (far right holding the box) showed up with friendship bracelets not just for her French immersion Kindergarten class (shown) and teacher Madame Kathy Asfeldt, but every single person and student at the school; 357 in all.Supplied/WHPS

ATHABASCA — Sometimes you just feel the need to make people smile, and sometimes you have to ask your mom to help you do it.

When five- almost six-year-old Maddie asked her mom Desiree Capelari to help make flowers for her Kindergarten teachers at Whispering Hills Primary School (WHPS) in Athabasca during the last two-week quarantine, she had no idea how that plan would grow and grow.

She reminded Maddie how the Valentine’s Day cards had to be quarantined and she wasn’t sure there would be enough time to make all the bracelets for one classroom and then have them sit untouched for the required amount of time before school started again May 25, but ultimately she agreed.

“I went to the (Great Canadian) Dollar Store in town and I started going around and searching for string, and we didn't do the easiest, simplest ones for the first half of them,” laughed Capelari. “We did the wheel with the seven strings.”

They made those bracelets when Maddie said she had another idea in mind.

“I got probably almost all 18 done in two days, and then she came to me and she goes, ‘Mom, you know how I was saying I wanted to make friendship bracelets for all the kids in my class because everybody's been having a really hard time with COVID, and they've been struggling, and we haven’t been able to do anything really fun at the school because of COVID; we can't touch, we can't kick and play ball and do the normal stuff, so, I have an idea,’” she said, adding she had a feeling she knew where Maddie was heading.

That idea was to make friendship bracelets for everyone at the school — 357 of them.

“I have a sweet spot for stuff like that because my grandma did a lot of volunteer stuff when she was still alive so when Maddie came to me and said it, I was instantly stuck, there was no getting out,” said Capelari. “My husband looked at me and he’s like, ‘You need to just say no because you have no idea how much that is.’”

But, because Maddie wanted to make everyone smile, she dove in and started searching for more string.

“I bought out every possible bright-coloured string I could find from the Dollar Store and tried to get it done and then we lucked out right before her return to school — on the Saturday I had to go into the city – so I head into Michael's (an art and craft supply store) and I ended up buying more,” she said.

She had made a call and had someone at the school figure out how many teachers, teaching assistants, students and even janitorial staff there were before she started churning out bracelets.

“Our whole plan was to try and get them done before Maddie went back to school on the Wednesday,” she said.

And they accomplished it she said, noting she had help for the last 30 or so, and surprised everyone at the school when in-person classes resumed.

“Some of them are like an eight braided – almost like a rope – the one I got is like the rope and it's not easy. I have learned to do it,” WHPS principal Lorna Anderson said. “Could I replicate it today? Nope, I would not have a clue how to do it, but it's quite extensive.”

Not only did Maddie present everyone with a bracelet there was something else with it, Anderson noted.

“Every single bracelet was put in one of those little Ziploc bags with a little card in it with the word ‘smile,’” she said.

So, Maddie accomplished her goal, she made everyone smile.