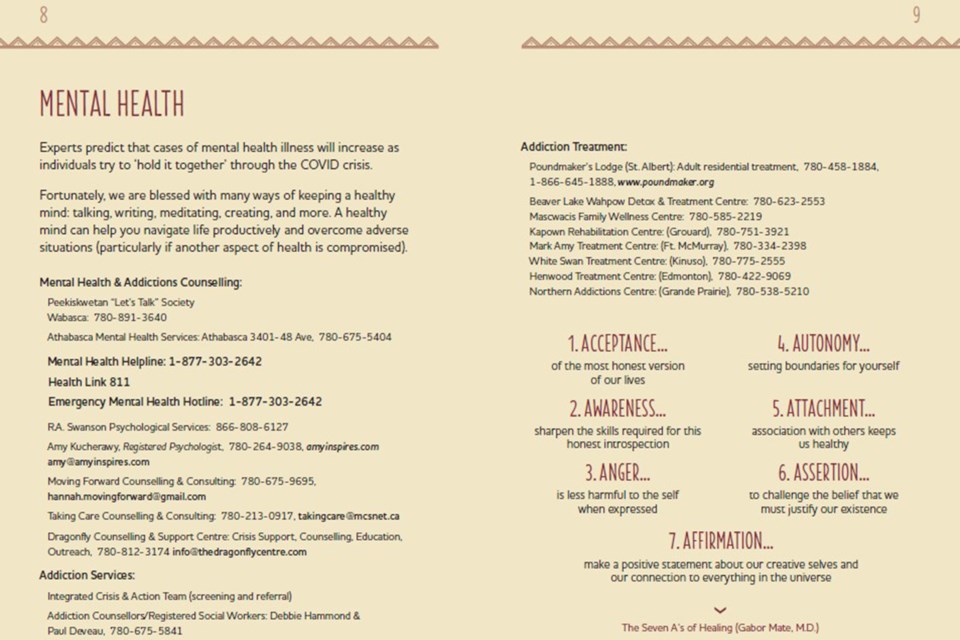 The mental health section starts on pages 8-9 of the Athabasca Native Friendship Centre’s brochure “Pathways to Healthy Living: A Guide to Health Supports in Athabasca,” providing a list of resources and numbers to call to support your own mental health, while the rest of the pamphlet takes a holistic approach to health by listing resources for physical, spiritual and emotional well-being as well. The brochure is available by contacting ANFC.Athabasca Native Friendship Centre

ATHABASCA – It's Mental Health Week in Canada May 3-9 and organizations — whether local, provincial or federal — are encouraging resilience among citizens experiencing feelings of depression, or more stress and anxiety than usual, and to use the resources available to them, if necessary, because there are many.

As the whole of society prepares to make its way into the second year of the COVID-19 pandemic, the Canadian Mental Health Association says, “We should remember that this is absolutely the time to lean on each other. Even if we can’t be close physically, we need to stay close emotionally. So, while you’re staying in, stay in touch with each other, and reach out if you need support.”

In Athabasca specifically, the Athabasca Native Friendship Centre recently completed a guide to health supports for the region called “Pathways to Healthy Living.” It takes a holistic approach to health with not only a section on mental health and addictions, but physical, spiritual and emotional health as well, all of which contribute to our overall wellness. A listing of contacts for those who chose to reach out for help when they need it is provided.

“Experts predict that cases of mental health illness will increase as individuals try to ‘hold it together’ through the COVID crisis,” begins the ANFC brochure’s mental health section. “Fortunately, we are blessed with many ways of keeping a healthy mind: talking, writing, meditating, creating, and more. A healthy mind can help you navigate life productively and overcome adverse situations (particularly if another aspect of health is compromised).”

Local and provincial mental health services, from counselors and psychologists, to treatment centres for addictions, to information on general help lines and emergency hotlines is all included in the brochure, which came about from a provincial grant.

All one has to do is ask for help — it’s vital. ANFC provides those referral services to those who need it, but unless an individual’s behaviour crosses into major criminality, if they don’t ask for help themselves, there is little the law can do.

At his last report to Athabasca town council in April, now retired RCMP Staff Sgt. Paul Gilligan filled councillors in on the legalities of a mental health warrant.

In the instance of an unhoused Athabasca man who has shattered the windows of several businesses and vehicles on several occasions, Gilligan said RCMP can arrest him under the Mental Health Act, and have, but he is soon released.

“There's no way they're going to hold him in the remand centre to keep him from doing these offences …  it really comes down to, this is a mental health crisis that we have in our community, and we can’t charge our way out of that because with the majority of people, the court will eat the charges against somebody in those situations. We do lay the charges, but nine times out of 10 they’re stayed when they go to court,” he said.

The recent federal budget set aside $994 million for the expansion of mental health services, which was applauded by the CMHA.

“We are thrilled to see the government take an important leadership role in meeting the needs of under served populations, with targeted investments in Indigenous mental health, measures to curb the opioid poisoning crisis and problematic substance use and programs to cope with COVID-19 related trauma, as well as national mental health care standards,” read a statement released April 20.

“Earlier access to services at the community level can prevent individuals from needing more cost- and time-intensive interventions down the road. We look forward to working with the federal government to ensure there is increased and sustained federal funding directed to community-based mental health organizations to support the mental well-being of all Canadians.”

Additionally, a December motion by B.C. Conservative MP Todd Doherty to combine existing suicide prevention services together at one three-digit number, was passed unanimously in the House of Commons.

The 988 suicide-prevention hotline is meant to remove barriers and provide a quick connection to help and relevant resources in a mental health emergency, to help save lives in the desperate moments that a person may be contemplating suicide.

The United States recently adopted its own 988 legislation — an idea that came about as a result of an Internet petition by a 14-year-old girl, who found it took considerable effort to find the right people to connect to when she experienced her own mental health crisis.

Statistics show Albertans are the most stressed in the country, but despite the pandemic, a decrease in actual suicides in the province decreased in 2020, and is as low as it has been in the last five years, according to Alberta Justice.

However, the long-term mental health effects of the pandemic are not yet known.

Both Athabasca County and the Town of Athabasca recently passed motions in support of the federal legislation to institute the three-digit hotline.