Students to return to the basics; facts over fads, claims minister
Mar 29, 2021 4:53 PM By: Andreea Resmerita 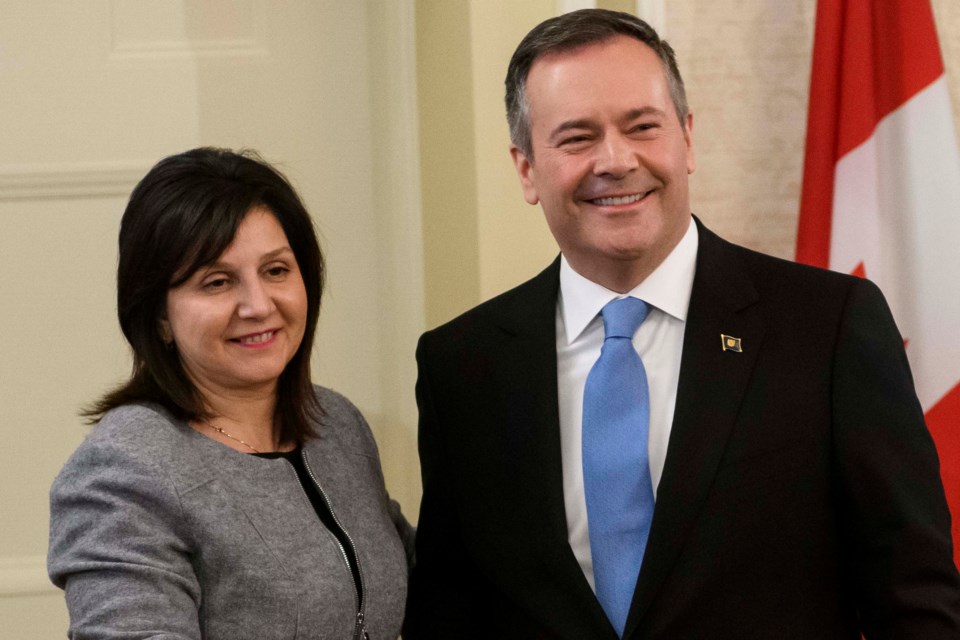 Education minister Adriana LaGrange, with Premier Jason Kenney, during the swearing in of cabinet at Government House in Edmonton on April 30, 2019. ALBERTA GOVERNMENT/Photo

WESTLOCK — Students in kindergarten to Grade 6 in Alberta schools will go back to basics with the new draft curriculum the provincial government unveiled on Monday.

Social studies will look like a chronological account of world history from First Nations to ancient Greece, Rome or China, and medieval Europe to Dominion Canada and early colonial America.

The curriculum, which will be piloted beginning in September, also includes a host of other factual information from the Magna Carta to the origins of Judaism, Christianity and Islam.

Historians have taken issue with the focus on chronology in the new curriculum. In a letter to Education minister Adriana LaGrange in November 2020, Dr. Penny Bryden, president of the Canadian Historical Association, said students should be taught how to understand the past instead of memorizing it.

She added the government hasn’t used modern scholarship on historical education in developing the curriculum, and the route they’re taking would "turn the clock back thirty years in Alberta, to an era when no one loved their social studies classes.”

In a separate, 14-minute long press conference with rural newspapers where reporters were asked to text their questions, LaGrange said that “developing a shared knowledge that students have in their memory bank really builds in future years that ability to really understand each other, and to grow in the social studies area.”

Included in the material will be lessons that LaGrange says should develop responsibility and “pride in who we are today,” that include rule of law, military history, and the story of Canadian Confederation. One of the key components of the draft curriculum is teaching citizenship. She added students will learn about “our historical triumphs” and “historical injustices.”

It’s not until Grade 4 that students will be introduced to Truth and Reconciliation, and a year later they’ll learn about residential schools, a move which was criticized by Indigenous leaders and the NDP opposition.

Cree Elder Betty Letendre, who was one of five elders that gave feedback to the government in December 2020, told Global News she can’t endorse the curriculum changes. The Truth and Reconciliation Commission recommended residential school history be introduced at the earliest grades.

In response to questions from media, LaGrange said “I am excited that we have so much factual, knowledge-rich content” in the curriculum about First Nations, Metis and Inuit history at all grade levels.

In Grade 5, students will also start learning about Black history and settlements like Amber Valley, near Athabasca.

In math, LaGrange said the new curriculum will focus on the basics like addition, subtraction, multiplication and build up. It will do away with “educational fads and unproven methods of discovery or inquiry learning.”

Consent and other practical skills

Consent will be part of early education beginning as early as kindergarten. Students will first learn about personal boundaries and how to communicate refusal and permission, then move on to applications in sexual activity.

Other practical skills like computer sciences and financial literacy will also be taught at earlier stages.

These were also part of the previous NDP government’s plans to overhaul the curriculum, and opposition critic Sarah Hoffman said she is glad they remained in the UCP’s changes.

The new curriculum will first go through a pilot period beginning this September, but the government hopes to introduce it across Alberta schools in September 2022.

School divisions didn’t get early access to the content of the new curriculum, and are only now getting to review the details.

“It will take some time before we are able to provide any degree of informed critique,” wrote Pembina Hills School Division assistant superintendent Mark Thiesen in an e-mail to the Westlock News.

Thiesen said PHSD hopes the new curriculum will help them implement their own priorities: student-staff relationships; literacy and numeracy; and support for staff. Literacy and numeracy are two of the pillars in the draft K-6 curriculum, along with citizenship and practical skills.

"New elements such as literacy and numeracy progressions seem very promising. We are also looking forward to how the curriculum has charted a path for learning about Indigenous perspectives,” Thiesen added.