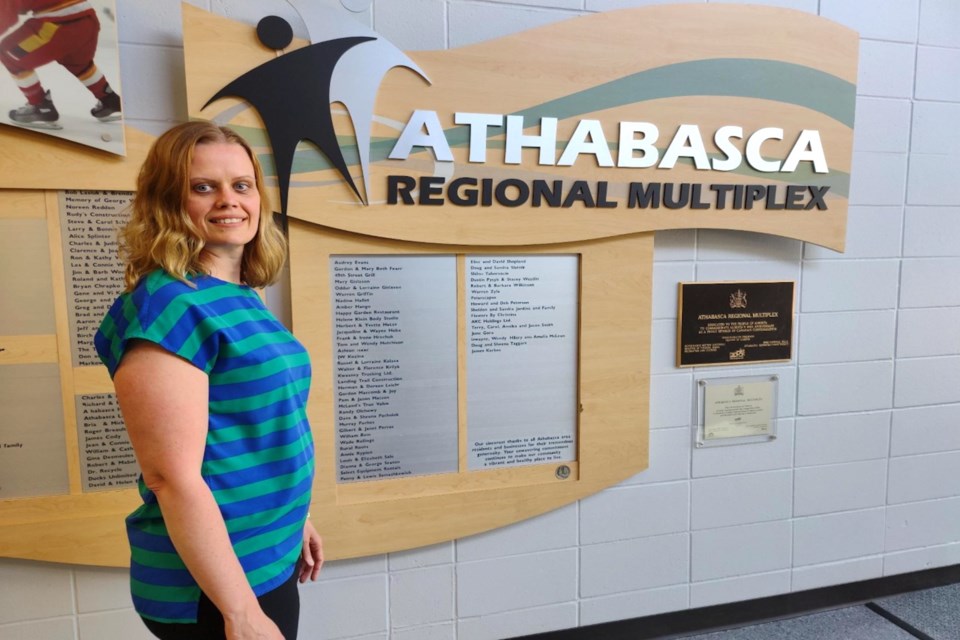 Former transportation coordinator with Aspen View Public Schools Rhonda Alix is embarking on a new adventure as general manager of the Athabasca Regional Multiplex. Alix started April 13 and has spent the last few weeks learning the role and is now preparing to reopen the facility as soon as Step 2 of Alberta’s Open for Summer Plan is announced.Chris Zwick

ATHABASCA — The new face of the Athabasca Regional Multiplex (ARM) is one you may recognize.

Rhonda Alix spent the last six years as Aspen View Public Schools' transportation coordinator, playing an integral role in sorting out the complicated bussing needs of the school division’s 2,500 students, and now she is using that experience working with so many different moving parts, taking over the management duties at the multi-million dollar recreational facility as of April 13.

“I moved to Athabasca in the summer 1987 from Consort with my family and have been here ever since,” she said in a June 2 interview. “Definitely long enough to call it home.”

With children of her own, Alix is familiar with the building and felt the career change was good fit.

“I have two children who are very active and have been involved in multiple sports utilizing the facility since it opened,” she said. “My family has spent a lot of time at the Multiplex and the original Landing Pool either watching or participating in just about every different use the facility has.”

She added her whole family is involved somehow either playing sports or in the background.

“My husband and I have also been on the board of directors for various Multiplex user groups which has provided me background of the needs of the users of the facility,” Alix said. “The general manager role is an opportunity to be a part of such an amazing facility that I frequently use as a patron.”

And while it may seem crazy to some to switch jobs in the middle of a pandemic, it gave Alix the time she needed to learn the ropes before anxious residents start filling up the building again.

“The pandemic wasn’t directly a factor in my decision to apply, but I did feel that if chosen it might provide some time to adjust to the role and responsibilities of the position before the facility opened back up to the public,” she said. “It is a big change, but an exciting one.”

She’s been spending her time learning about the day-to-day operations, maintenance of the sprawling facility, scheduling and more and found her previous employment helpful.

“Organization and communication are No. 1 and No. 1A. My background in finance as a bookkeeper and treasurer for multiple organizations is also a key,” said Alix. “Understanding how to navigate things like budgets and provincial grants is a big asset. Also working with an elected board and my leadership skills.”

Since Step 1 of Alberta’s Open for Summer Plan was announced June 1, and Step 2 projected to be announced June 10, Alix has been working hard with staff to reopen as soon as Step 2 is official.

“It is a great feeling to be recalling staff back to work and getting ready to have people back in the facility,” she said. “Patrons can expect a welcoming atmosphere as we are excited to be open to the public.”

While there will still be restrictions in Step 2 – updates will be provided on the ARM website and social media – there will be many activities available.

“The entire Multiplex facility will be open to the public during Step 2 following the government restrictions,” she said. “The Step 2 restrictions are indoor recreation (and) entertainment … open at one-third of fire code occupancy; gym open for solo and drop-in activities and indoor fitness classes with three-metre distancing; and youth and adult sports can resume with no restrictions, indoors and outdoors.”