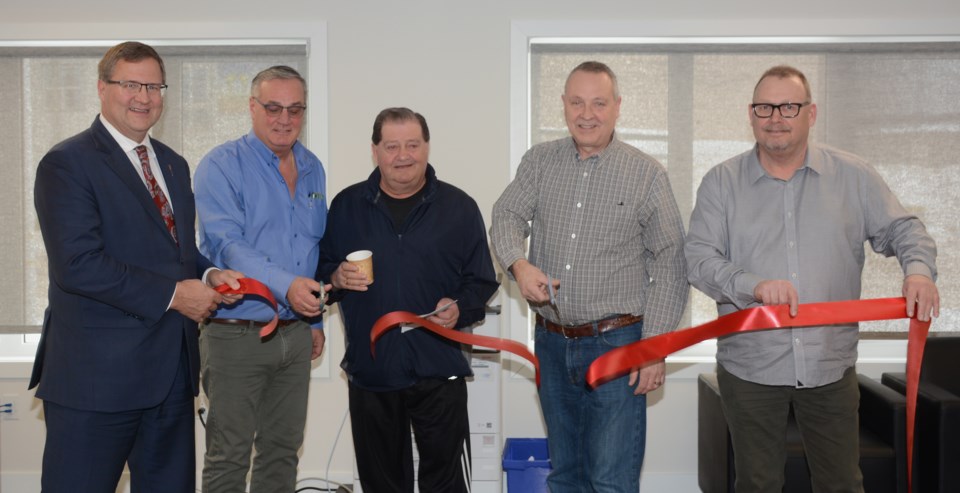 WESTLOCK - Back in mid-October, Westlock Terminals’ new $500,000 office building, manufactured at Northplex Ltd. near Barrhead, was delivered in two sections to property owned by the co-op just across the street from the old office and grain terminals.

Over the next few weeks Northplex put the finishing touches on the buildings and then it was a waiting period for the telephones and Internet to be connected.

Finally, just a few weeks ago, office staff were able to move out of the old dusty, noisy, mouse-infested office into the bright, clean, facility they had looked at longingly from across the street.

And on Feb. 20 the Terminals held its official grand opening of their new office, with board members, former and first general manager Bob Heck, Athabasca-Barrhead-Westlock MLA Glenn van Dijken, Town of Westlock mayor Ralph Leriger and some of the councilors, plus other guests.

Terminals CEO Clifford Bell acted as MC, introducing Terminals board chair Randy Wold, along with the other dignitaries.

“We’re really excited to be showing off our newest part of Westlock Terminals,” said Wold, who has been on the board for five years, and chairman this past year. “And a lot of change has happened in this past five years.”

He said several years ago the board at the time did a strategic plan, and putting a new office would enable the Terminals to continue on with its expansion, which will eventually include replacement of the last remaining wooden elevator, where the old office was also located.

“The old plant is well past it’s time and wasn’t designed for what we’re putting through it and will give us some opportunities to do some other things.”

“Back in the Canadian Wheat Board days, we were a storage facility and then shipped it out. In the last while, we’ve changed to a logistics trading company involving cleaning, loading, trucking, blending, and using our own fleet of rail cars to help ship out our grain. With doing all that, it has helped increase our draw area as well.”

He added as an independent business, this new office gives them the room and opportunity to grow.

Leriger said it’s a big improvement over where they were working before.

“I’m proud of Westlock,” he noted. “We’re lucky to have a bit of diverse economy. We’ve got a strong manufacturing sector with Wabash and Precision; a real medical economy with all of the facilities that we have.

“But at the end of the day our roots in this town have always been in agriculture. Over the last few years as being the mayor, I’ve learned from Cliff about trains and a lot about this business.”

But, he said, what really sticks out, is in an agriculture community, you have more multi-generational people than in resource towns.

“And that’s a really good thing. Our younger people want to stick around their community.”

He said this challenges the leaders of today to make it happen, and noted several of the staff at the Terminals are local young people in leadership positions.

“I think that’s just a fabulous thing, and I look forward to seeing what these young people can do for our community and for themselves and for the greater area.”

van Dijken began by noting he was wearing his MLA ‘hat’ but as a farmer himself is proud to be also participating within the co-operative.

“I look back several years in the evolution of how this transpired and how Westlock Terminals became a New Generation Co-op. The vision of not only the agriculture community — the producers, but also the vision of the business people and the leaders within the town on the potential of saving this asset for this municipality and for this town. That’s one thing I hold dear is that it is actually a community project.”

He said it shows the potential is there for the community to come together even in the midst of dire times.

“Congratulations to the board of directors on your leadership, to the staff and all the work you’ve done to ensure that this continues to be a thriving business within our community – we hope for many more years to come. We look forward to new ventures and new direction.”

Just before cutting the ribbon Bell rounded out the list of speakers with a few closing comments.

He invited those present to stick around, tour the office, and note some of the new and old in the office — the old being the boardroom table, which was put together by Pibroch Colony using boards from one of the old demolished wooden elevators.

“We had lots of good meetings around that table.”

Echoing some of Wold’s comments, Bell added, “We’re one of the few independents that are left. We’re in a challenging environment every day.

“I get asked very often, ‘What do I think about competition, and how’s that going to affect me?’ I’ve been dealing with competition all of my life — half the time I was competing with the local elevator agent that worked for the same company as me.”

Bell said he has thought the best way to deal with competition is to stay fresh and new ideas and aggressive and try and outsmart the competition and stay one step ahead of them.

“And that’s we’re going to do with Westlock Terminals, because we’re under the threat every time I turn around. It doesn’t have to be a new elevator down the line,” he said.

He added there are many who have wanted to copy Westlock Terminals model.

“So that tells me we’re doing the right thing. But we’ve got to stay one step ahead of them.”

Bell pointed out the Terminals own fleet of rail cars, the trucking program as positive steps in that direction.

“It’s such a step from where we used to be, we’ve come 100 per cent different. We’ve evolved a really diverse company, where maybe the grain storage is secondary.

“That’s what we’ve incorporated into this office to have another trading cluster down the road and be able to handle grain and sell grain efficiently and effectively.”

He noted construction is ongoing with currently tying in four of the bins into the rest of the system with a grain pump, and the ability to feed them from the east tanks. Bell added that down the road, the remaining wooden elevator would be on the chopping block.

“I want to thank you for all your support in the driveway and in the community. We definitely hear that mileage we get from you guys every day.”

With that, he moved the agenda into the ribbon-cutting ceremony, the cake cutting and coffee and juice, and the opportunity for guests to check out the office, and spend some time just visiting with one another.

Barrhead residents can still check out books from the library
Mar 28, 2020 6:30 AM
Comments
We welcome your feedback and encourage you to share your thoughts on this story. We ask that you be respectful of others and their points of view, refrain from personal attacks and stay on topic. To learn about our commenting policies and how we moderate, please read our Community Guidelines.