Vague re-opening causes challenges for gym owner Mark Vriend, but one he is glad to take on
Mar 8, 2021 7:00 AM By: Barry Kerton 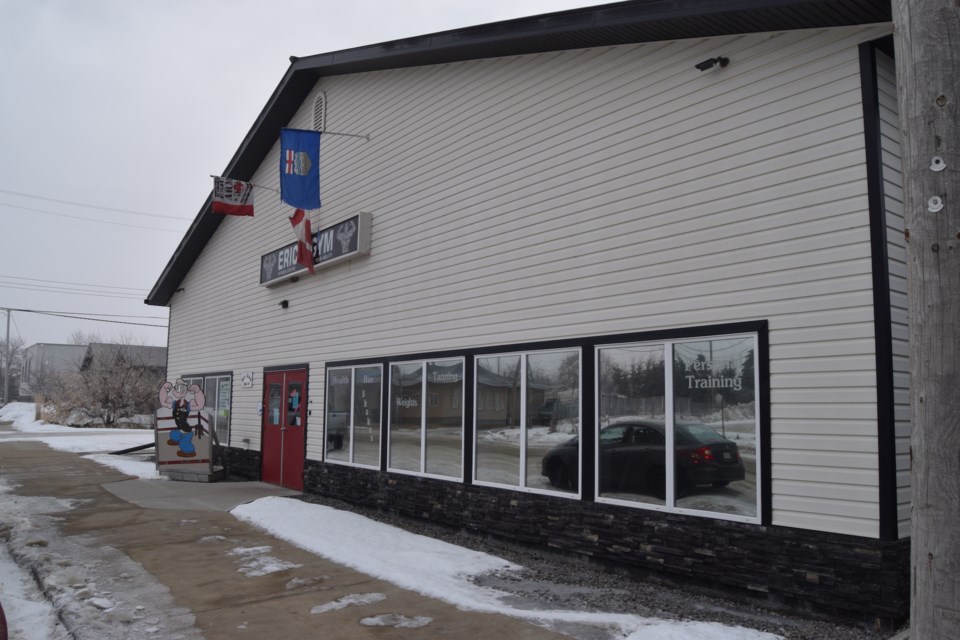 Mark Vriend, the owner of Eric's Gym, which re-opened March 4, said he would have liked the province more guidance from the province about the rules fitness facilities have to follow as part of the Moving Safely Forward relaunch plan. Barry Kerton/BL

BARRHEAD-It has been a day Mark Vriend has been waiting for several months — on March 4, Eric's Gym re-opened for business.

And although he was pleased to re-open his family-run business Vriend was still upset that the government forced the closure of his gym and others in the fitness industry.
In the past 12 months, Vriend estimates his gym has only been open for six.

The province announced gyms could re-open March 1, as part of Step 2, of the Moving Safely Forward COVID-19 re-opening framework. "Locking someone out of their business is a lot like putting someone in jail for a crime they never committed," he said.

"It almost does the same damage. It takes away everything you got, you can't provide for your family, leaves a hole in the community that everyone feels, has generational effects and is just not right.”

He added he considers his family one of the lucky ones, in that although they have had to close the gym for large periods, they have other business interests to draw upon.

"Not everybody is as fortunate," he said, adding that is why he approached the Town of Barrhead council about a month ago asking them for their help in advocating for small businesses impacted by COVID restrictions, especially those that had to close their doors for extended periods.

Council agreed with his request and passed a motion that they would step up their advocacy efforts on behalf of local businesses struggling to stay afloat due to the pandemic through their local MP and MLA.

Vriend is quick to point out that he understands the need to protect people's health and that protections need to be put in place, but forcing businesses to close is not the answer.

"What you are saying is the safety of some people is more important than the safety and well-being of the small business owner. They keep saying that we're all in the same boat, but we are not," he said. "The small business person is outside the boat and has to swim without a life jacket for a very long time."

Vriend also voiced his disappointment at the lack of direction and clarity about the rules and guidelines gyms need to follow.

For the most part, how owner and operators gym owners run their facilities has been left to their interpretation of the guidelines.

Higher intensity workouts such as running on a treadmill are also allowable, but only on an appointment basis, and on a one-on-one basis with a trainer.

Shandro also said the guidelines were created by looking at what other jurisdictions are doing, specifically B.C., and after consultation from industry stakeholders.
Vriend questions the latter, noting he is not aware of the province asking for gym owners’ input.

He added that Shandro's comments about how people who wanted to run on a treadmill would need to have a personal trainer infuriated many people in the gym industry.

"It was a ridiculous thing to say. How will having a personal trainer there help anything?" he asked.

Shandro said that running on a treadmill would likely be considered a high-intensity activity.

To operate under the guidelines, Vriend said Eric’s Gym, at least for the time being, will become members only and gym-goers will have to make an appointment for one of several appointment slots ranging from six hours to one hour in length.

"It is going to be difficult to operate under the guidelines, but we are going to do everything we can to do so. Not only because we want to make sure people are safe, but because businesses need to be open," he said. "Not only is it expensive and time-consuming but nerve-wracking because they haven't told us how they want things done."
Since Vriend announced the gym was reopening, he said the response has been overwhelming.

"There are a lot of people that are wanting and craving the gym. It is what they do for their health and mental well being," he said, adding the positivity and kind words his family has received has also done wonders for his mental health. "The uplifting words were very uplifting and to be honest come at a time when they are needed."
Barry Kerton, TownandCountryToday.com