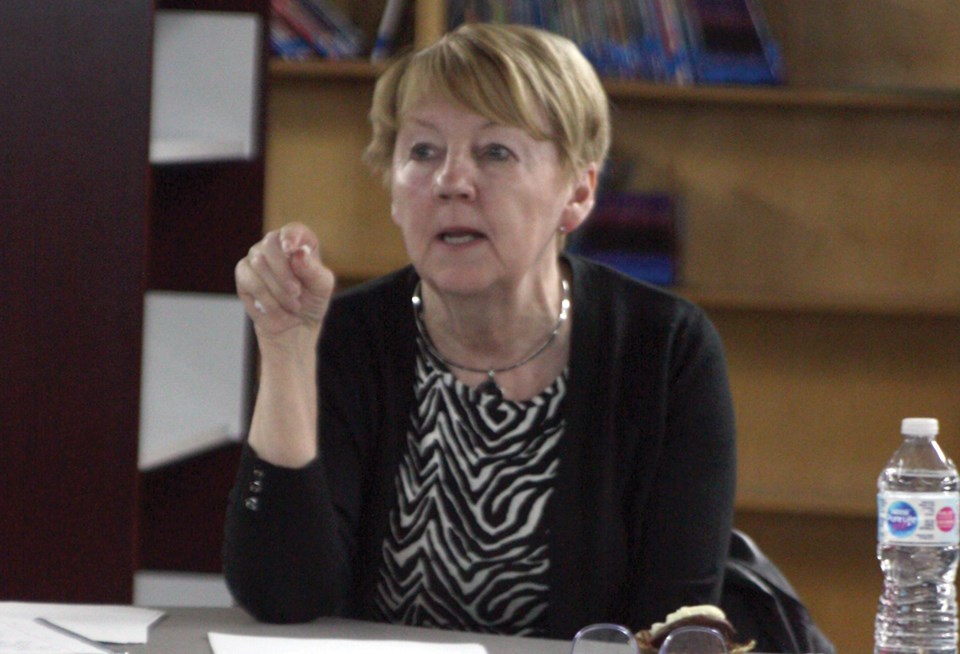 Pembina Hills trustee Wendy Scinski laid out the options for the future structure of the school board during a school advisory council meeting at Westlock Elementary Jan. 23. The ward review survey is available on the school division website at www.phpschools.ca. Chris Zwick/WN

The ward review was a topic of discussion for the school advisory council meeting Jan. 23 and Pembina Hills trustee Wendy Scinski delivered a presentation, going over some of the numbers and the options being presented to parents as they are asked to offer their opinions on the future structure of the school board.

A survey on the subject is available on the Pembina Hills website and parents are invited to choose one of the three options laid out by the board. Interested parties can also find the same presentation on the website or attend one of the remaining school advisory council meetings where the ward review is being discussed.

Scinski pointed out to the audience of advisory council members (there were no other members of the public present) that since the current make-up of the board was established in 1995, enrolment has dropped by 1,578 students, or 29.46 per cent, across the division, and there are four fewer schools.

“The goal is to look at the current ward structure to make sure it actually effectively represents the general and school populations and our communities,” said Scinski.

Option 1 is to maintain the status quo with three wards (Barrhead, Swan Hills and Westlock) and seven electoral subdivisions represented by seven trustees — one each for the Town of Barrhead, Barrhead North and Barrhead South, then one each for the Town of Westlock, Westlock North and Westlock South. There is also one trustee representing Swan Hills.

Currently there is one trustee in the Town of Westlock that is responsible for R.F. Staples, Westlock Elementary and Westlock Outreach which have 1,184 students altogether. The Westlock North trustee oversees Pembina North Community School and the Sunny Bend and Pibroch colony schools, with 258 students.

On the west side of the division, the Town of Barrhead trustee is concerned with Barrhead Composite, Barrhead Elementary and Barrhead Outreach, which have 1,410 students. Barrhead North includes Neerlandia Public Christian School and Fort Assiniboine School with 296 kids. The Barrhead South trustee is responsible for the 49 students at Dunstable School, while the Swan Hills trustee represents 207 students at that school.

“As you can see, it does not provide representation. It doesn’t represent equally on the community or the student level and it has been in existence since 1995 and we have about 30 per cent less students and four fewer schools,” said Scinski.

The other two options will each have one ward and six trustees, which will save the school division approximately $20,000 per year having to pay the stipends, expenses and training for one less trustee.

Option 2 sees the division split into four subdivisions with one trustee each chosen from Westlock and Barrhead in addition to two members at large from the areas surrounding each of the towns.

The Town of Westlock trustee would still oversee R.F. Staples and Westlock Elementary, as well as Westlock Outreach, with a population of 5,101 in town including 1,184 students. Residents in Westlock North-South, which has a population of 7,650 and 633 students at PNCS, Eleanor Hall, Busby School and the two colony schools, will vote for two trustees if the board chooses this option.

Similarly in Barrhead, the town trustee will still be responsible for the high school, elementary school and outreach school.

Scinski noted this model is more equitable, and allows flexibility for coverage of schools by trustees and covers the sparsity of population and distance in rural areas with the addition of at large trustees.

Scinski noted the third option was the most equitable, but problems with representation could arise and could also affect voting, with a 3-3 tie being considered a failed motion.

R.F. Staples will have its meeting Jan. 28 at 7 p.m. with a meeting Feb. 3 at PNCS at 6:30 p.m. and a joint meeting of Barrhead Composite and Barrhead Elementary will take place at the elementary school on Feb. 3 at 7:45 p.m.

The survey will be on the Pembina Hills website until Feb. 10 and a report will be completed by the board to share the findings of the survey, though trustees will make the final decision. Paper copies will also be accepted.

The public is also welcome at any of the remaining meetings.