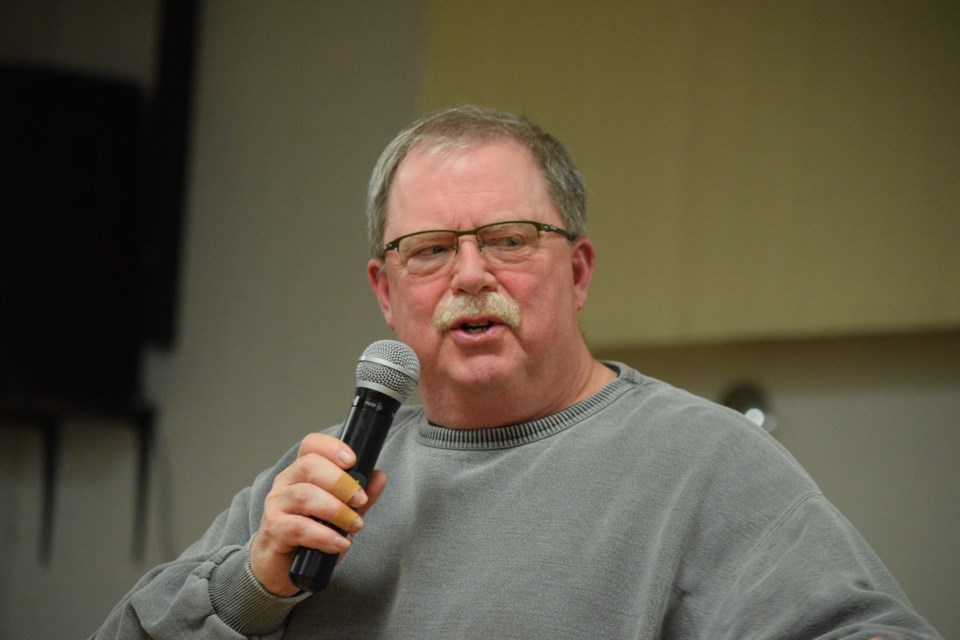 BARRHEAD - The gun culture in Alberta gets a bad rap.

That is according to Town of Barrhead mayor Dave McKenzie, adding it is difficult for those not involved in the province's shooting and hunting fraternity to know what the culture is, as their perception is coloured from what they see in popular entertainment or urban TV newscasts.

"But that is not the reality of what the gun culture in the province is," he said.

In addition to being Barrhead's mayor, he is a former RCMP member and a Canadian Firearms Safety Course instructor. A person must complete the course before applying for their Possession and Acquisition Licence (PAL) required to purchase a firearm. He is also a long-time shooting enthusiast, having grown up in Saskatchewan and learning how to shoot on the farm.

"Having a firearm was just like having a shovel or a spade. It was an implement, using it for predator control," he said. "But I can tell you I shot a lot of tomato soup cans just for fun."

McKenzie did not want to discuss the merits of the legislation, stating from his point of view, it was more of a political exercise than anything else and would have little impact on criminal activity.

One of the more prominent features of the proposed legislation is that it would re-classify about 1,500 models as assault-style weapons, making them prohibited.

"It has nothing to do with public safety, but the general public who don't understand firearms culture just lap it up," he said, adding the vast majority of weapons on the list are not available in Canada.

He used the example of a recent TV newscast he watched about the proposed bill and the types of weapons the legislation would ban.

"The picture they had in the background was a squad automatic firearm that is belt-fed," McKenzie said.

"That is what they are showing as they are talking about getting these guns off the street. No one outside of the military can own these things. So right off the bat, it is misleading," he said.

McKenzie also noted that the public is inundated with negative stereotypes about firearms from popular culture from TV, movies, or video games, where the sole purpose of a gun is to "explode someone's head."

A recent commentary by T&C columnist Heather Stocking questioning the necessity of handguns in this day and age, piqued McKenzie's attention too. While understanding the need for long guns in a rural area, she suggested the government would be better off introducing stricter controls on ammunition as without, guns were basically expensive paperweights.

"People need to step up and talk about the actual culture of the people who use firearms in this country is," McKenzie said. "The competition, sporting, social, family gathering aspects, instead of perpetuating the views of the housewife in Toronto who is getting all her firearms knowledge from the drive-by shootings and gang warfare seen on the news."

He also said the people are mistaken if they believe the controls to buy firearms, especially handguns or other restricted weapons, are too lax.

"The controls are already there," he said.

Like any firearms owner, McKenzie said they first must take the Canadian Firearms Safety Course as well as one for restricted (including a handgun) weapons. They then have to apply for PAL and prove they qualify for one of the three reasons allowed to have such a weapon. The reasons are for target practice or shooting competitions, as part of a collection or in limited circumstances, to use in connection with one's lawful profession or occupation, or to protect life.

If the weapon is part of a collection, a gun owner could be called upon to demonstrate their historical, technical or scientific knowledge of the item; consent to occasional inspections of the place where the collection is stored; and comply with regulations dealing with safe storage, record-keeping related to owning restricted firearms.

McKenzie said while any person involved shooting and death is tragic, the number one cause of deaths related to firearms is not crime, but mental health.

"The data is pretty consistent," he said. "In Canada, 81 per cent of firearms-related deaths are suicides, 14 per cent are from criminal activity and five per cent are caused by accidents."

And although the connotation of firearms in the general public might be negative, McKenzie feels that the tide might be turning.

He noted that more and more people that take his Canadian Firearms Safety Course are women, youth and families, most without firearms backgrounds.

Joe Prociuk, president of the Fish and Game Association, agrees, saying more people of all ages and genders are using their facility. The association operates a gun range near Thunder Lake.

Much of the resurgence in popularity of shooting sports, including hunting, Prociuk attributes to COVID-19 and the lack of other recreational activities.

"I was talking to one of the wildlife officers and he told me that in the Timeu area you almost needed to have a traffic cop because there were so many people at the cutlines," he said.

And while they did not quite need a traffic cop, Prociuk noted there were some minor lineups to use some of the gun range's features.

Most of the increase was due to target shooters, many new to the sport. It is a trend Prociuk believes will continue into the spring and summer.

"And it is not only the men," he said, adding a sizeable percentage of the gun range users are women. "It is a hobby, a release, it is a skill and because of COVID-19 more people are finding out how much fun it can be."