This panoramic photo take in 1940/41 by Alberta Brault was recently donated to the Tawatinaw Valley Ski Club. The club is looking to conserve the photo and display it at the chalet.

WESTLOCK - An 80-year-old panoramic photo of the Hamlet of Tawatinaw is in the process of being conserved and will join a pair of vintage skis and snowshoes on display in the chalet of the Tawatinaw Valley Ski Area.

The artifacts were donated in early 2020 by Theresa Kallal, née Brault, and offer a glimpse into the valley’s storied history, said Tawatinaw Valley Ski Club president Wendy Batog. Due to the timing of the initial COVID-19 outbreak, the club held off on a ceremony to showcase the donations and are now targeting fall 2021 for a formal unveiling of the conserved photo — the skis and snowshoes are already on display. Tawatinaw is located 35 kilometres north east of Westlock just off Highway 2.

“Right now I’ve been working with someone to clean up the photo so it’ll be a nice printable item … it’s got some yellow spots and other little issues. We’d like to put it above the fireplace with the skis and snowshoes she donated,” said Batog, noting they’re also trying to get all the pictured buildings labelled with family names.

“She and her family were original settlers of the valley. And those skis were on the hill long before it even was even a hill. To me these items are so important to show the history of Tawatinaw and highlight the sense of community we’re promoting here.

“We just ran of time to be able to do something formal last year. I wanted to save it until a time when we can truly show our appreciation for these items and the family.”

The panoramic, which is a series of photos, was taken in 1940/41 by Kallal’s older sister Alberta Brault, who’s since passed away. Kallal, who was the youngest in a family of 12, says her sister was an amateur photographer and climbed to the top of Tawatinaw’s grain elevator to get the iconic shot. Batog noted that she also has a photo of Alberta wearing the skis that are now on display at the chalet. 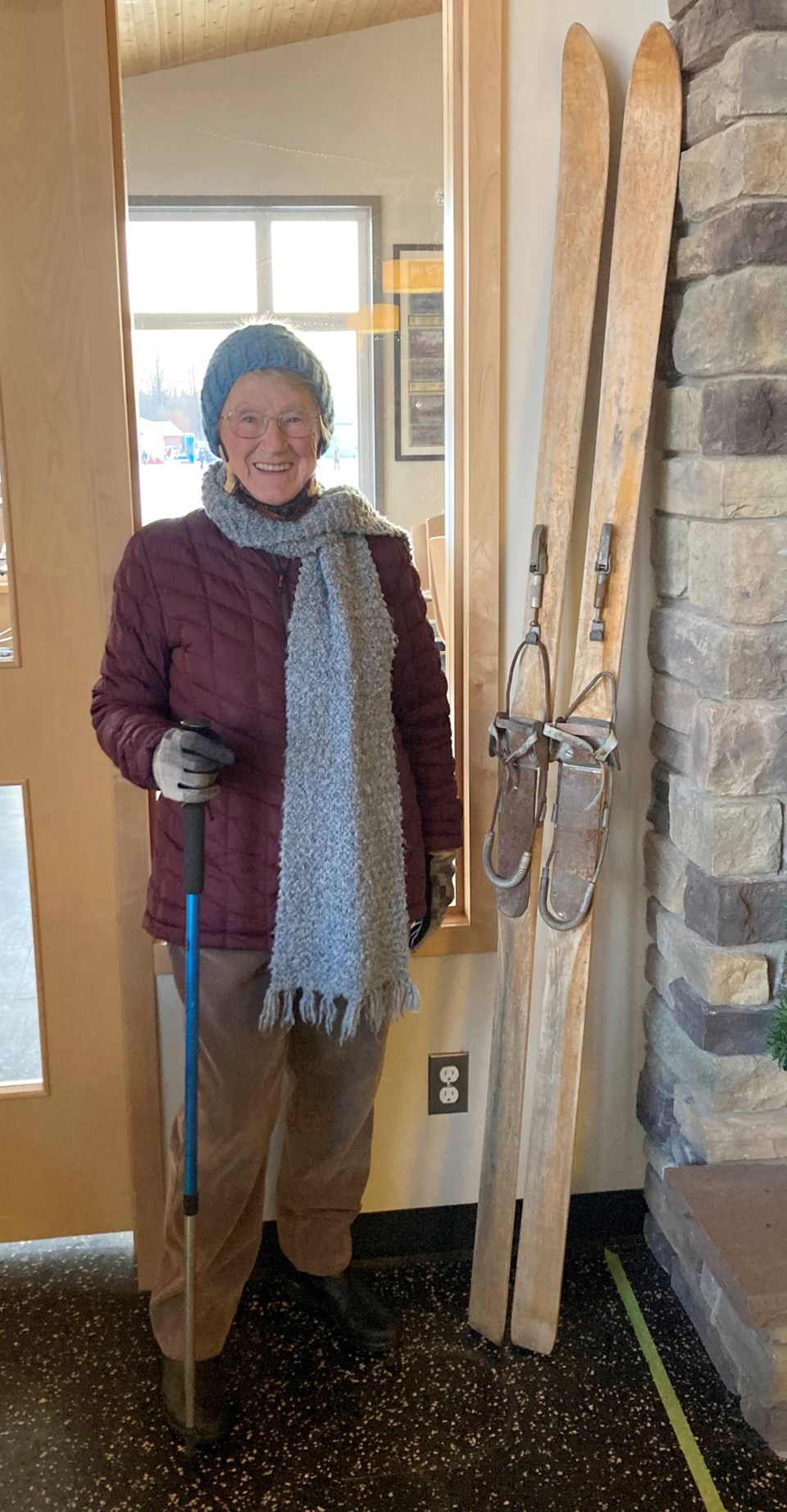 Theresa Kallal, Alberta’s younger sister, also donated vintage skis and snowshoes to the club for display in the chalet.

“She was in her 20s when she took that picture. She was an amateur photographer and was always taking pictures,” Kallal reminisced. “It’s a great picture to have … so many people have asked me for it over the years. They (the ski club) are so interested in keeping the ski hill going so I thought I’d share the photo with them.”

According to the history book Rolling Hills and Whisperings Pines, A Peak At The Past Vol. 1, the Brault family moved to the Tawatinaw area in the mid-1910s. In 1924, patriarch Joseph Brault moved the family into the hamlet when he purchased the blacksmith shop and the land which had the hall and the adjoining buildings. Joseph also served as the community’s postmaster from 1944-1956, then his wife Beatrice took over before she retired from the position in 1964.