Athletes from across northern Alberta in Tawatinaw Dec. 8 for North Zone Winter Games 2020 tryouts
Dec 14, 2019 8:05 AM By: Andreea Resmerita 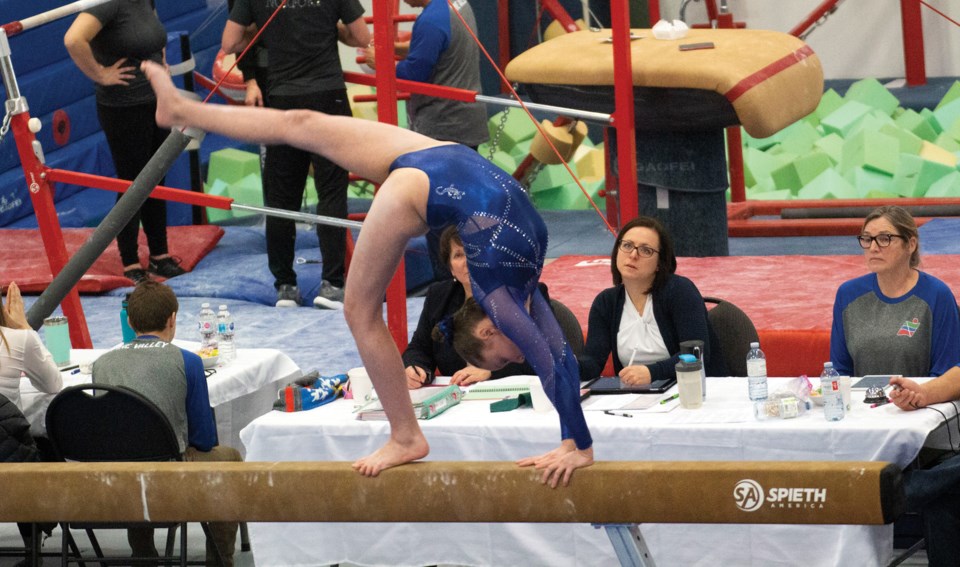 The Pine Valley Gym hosted the North Zone 2020 Alberta Winter Games tryouts for Junior Olympic Level 6-7 gymnasts Dec. 8. Around 120 gymnasts from northern Alberta, including Caitlyn Kassay, were in Tawatinaw to compete for a spot in the competition scheduled for February 2020. Andreea Resmerita/WN

TAWATINAW - The Pine Valley Gym Centre, a Tawatinaw-based gymnastics facility, continues its mandate as a hub of the sport in Alberta, yet again hosting provincial championship tryouts after a series of successful events and big-name teams have filtered through in the last three years.

From that group, 64 gymnasts scored high enough to move on to the winter games in Airdrie.

“It’s a fantastic facility. This is our second time hosting our competition there, and we have hosted four training camps there as well. They have great equipment, great staff, they have the dorm rooms which are really nice for our athletes and coaches, and then they spoil us with good food,” said Carolyn Foster, women’s artistic gymnastics coordinator with the Alberta Gymnastics Federation.

“I think all the parents were very pleased,” added facility owner Dom Kriangkum of those who might be the toughest critics.

The girls, ages 10-17 years old, although most were 12-14, competed on beam, floor, vault and uneven bars in three separate sessions throughout the day.

Foster explained that while the Federation tries to split the tryouts in two zones similar to this year’s competition, it’s not always possible since there aren’t enough available facilities across the province. Last time Pine Valley hosted they were home to all Albertan gymnasts.

At the same time, the level of competition has been remaining quite stable since the Federation made some changes.

“We’re four years in to using the JO system, and it’s a system that comes from the United States. We are seeing improvements with how our athletes and our coaches have been using the code, so I do think the quality of gymnastics has been getting better and better,” said Foster.

The last Alberta gymnast to have made it to the Canadian Olympic team was Brittany Rogers, for the 2016 Olympics.

He also coaches gymnastics at Pine Valley and confirmed that there was no local gymnast competing that day. The club has 60 recreational gymnasts and only one at the competitive level.

“We used to have more, but they kind of changed location. In the past, we had gymnasts competing in the tryouts too and even qualified to go … so they were very good,” he said.

The young competitive gymnast at Pine Valley, who is from the Tawatinaw area, is just starting out and isn’t quite at level 6 yet but Kriangkum is confident in her prospects for the future.

There aren’t many facilities like Pine Valley across rural Alberta that can host large-scale events, and Kriangkum says he always gets asked why he started one and maintains it to this day.

“Somehow the other day I went on some Japanese website (about) some people in Okinawa. They live so long because they follow this thing called ikigai,” he said.

Loosely, it means ‘the secret to happiness.’ Kriangkum explained it as doing what you like, what you’re good at, what the world needs, and what you get paid for — he’s still working on the last one when it comes to the gym facility. It helps the kids in the community, it brings some money into Tawatinaw since the resort itself can host other events too, so there’s payback in some way or another.

Since the facility has been open, some notable gymnastics teams have made their way up here to train on the Tawatinaw mats. Twice in 2017, one of them just prior to the World Artistic Gymnastics Competition in Montreal, the Chinese Olympic gymnastics team trained at the facility. In 2018, Team Thailand took to the mats.

The Canadian national team has trained there as well, said Kriangkum.