Plows continue to roll this week

Town of Westlock has handed out 29 tickets to people for not moving their vehicles
Mar 1, 2021 9:30 AM By: George Blais 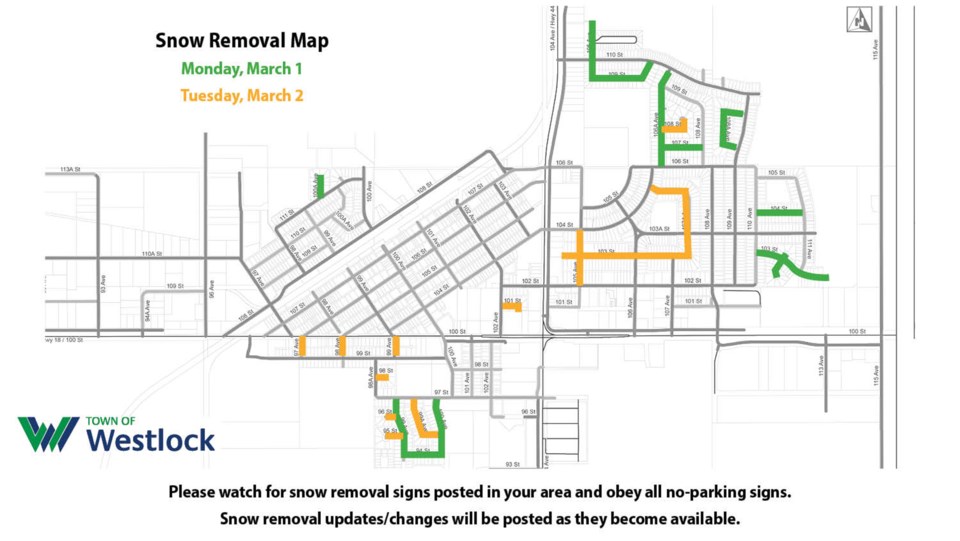 This map shows where Town of Westlock crews will be working March 1-2. For up-to-date snow removal information check the town’s website.

WESTLOCK - Snow removal efforts within the Town of Westlock continue this week and the municipality is again asking residents to ensure their vehicles are off the streets, or they’ll face a fine and possibly a towing charge.

So far in 2021, the municipality has issued 29, $120 violation tickets under Bylaw 2015-05, while 12 vehicles have been towed, which comes with a $200 charge — the town reports six have been physically towed and six were moved as the tow truck was hooking up. Plows were back on the streets Monday and Tuesday, March 1-2, (see map for locations) after the grader needed repairs Friday, Feb. 26.

CAO Simone Wiley said the tickets are nothing new, but towing vehicles has been added to what’s been called a “focused enforcement” this year. As she explained, the municipality has stepped up its communication efforts so residents know when and where the plows will be running. In addition to placing signs on the streets to be plowed, the municipality advertises its schedule on its website and social media channels and also uses traditional media like the radio and newspaper.

“There had been some complaints from people in the past that it was hard to understand what day it was on our snow removal signs — they used to say ‘snow removal in 24 hours.’ So, if a person didn’t know when the sign went out and if they didn’t look at any of the other information online or anywhere we put it, they wouldn’t necessarily understand when that was going to occur. So, we made the change to putting the day on the signage. Now, there’s no question about what day the snow removal is going to happen on the street,” said Wiley.

“We felt that we have used every available form of communication to inform people and made changes after receiving comments from last winter. We’ve decided to go with the towing route because our communications have stepped up significantly.”

Mayor Ralph Leriger said he always gets a few complaints about snow removal and said they’ve tried very hard to remove the ambiguity in the signs and communicate clearly.

“It’s a service that taxpayers value and we’ve gone above and beyond in the notifications,” said Leriger. “And if you can’t get it (your vehicle) going, pick up the phone. Ask your neighbours for help. Just ignoring it is not one of the preferred options.”

Ultimately having the streets clear of vehicles while the plows run is a safety issue that cannot be ignored, both said. Wiley did confirm that over the past month more people seem to have either forgotten that plows are taking to the streets, or just aren’t listening — this is only the second full snow removal the town has done this winter.

“It’s very important that people move their cars from the side of the road when we’re doing snow removal. When a grader hits a chunk of ice ... that video that we posted online the other day is the perfect example. That big piece of equipment, when it hits something solid like a chunk of ice, it just gets thrown. If there would have been a car parked there it would have hit it and it wouldn’t have had anything to do with the operator,” said Wiley.

“And those guys running the plows are all the same guys dealing with the waterline breaks or helping with the cleanup at the Commerce Building fire ... we have such a small operations crew. We’re pretty proud of our guys as they have to deal with all of this stuff and they pull through every time.”