Donna Legge and her brother both survived the disease
May 6, 2021 7:00 AM By: Heather Stocking 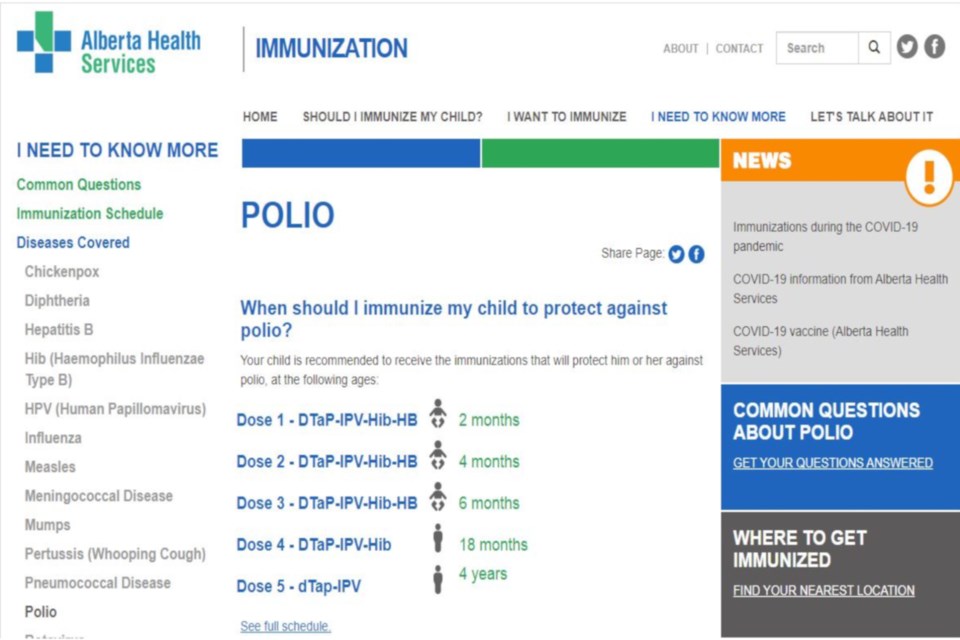 Even though polio is not common, it is only through vaccinations the debilitating disease is kept in check.Screenshot/AHS

ATHABASCA - As a rally decrying the current restrictions around COVID-19 was taking place in Athabasca April 29, one local woman was sharing her story of living through the polio epidemic and what is was like to be involved from her perspective.

It will be 80 years in September since Premier William Aberhart and his Social Credit government shut down schools In Alberta due to the growing polio epidemic that impacted the lives of an estimated 11,000 people in Canada who were left paralyzed by the disease between 1941 and 1955.

“I wasn't paralyzed, but his legs and his throat (were),” said Legge, who added her brother did eventually recover.

She decided to tell her story after hearing an 83-year-old local man remark that he had lived in Alberta his whole life and there had never been a lockdown before.

“Well, I lived in Alberta all my life too and it was shut down for a few summers when polio was so bad.” she said.

It was the end of summer when Legge, who’s originally from Strathmore, and her brother were playing with some neighbour children and their cousins.

“Four of us out of six ended up with it so, I don't know where it came from,” she said. “It was a scary time.”

Her brother was put in isolation in Calgary and Legge recalls her parents couldn’t visit him.

“He was in there for two weeks and my mom and dad couldn't see him at all, just go to the door and leave stuff for him so it was pretty awful,” said Legge.

For herself, she had no visible signs of polio, but testing proved she has also gotten it.

“I was just feeling lousy — (a) flu sort of thing like what people are now — and then eventually I didn't get much better so I went in and I had a spinal tap and they said yes I had had polio, but I didn't have anything that paralyzed me.”

It wasn’t until 1955 when Dr. Jonas Salk’s polio vaccine became widely available, that it was brought under control. At that time, it was administered on a sugar cube, now it is part of the vaccination regimen children get starting at two-months-old. Five doses are given at two months, four months, six months, 18 months and four-years-old.

“There were people in iron lungs with polio and one of the cousins of our neighbours, he ended up with crutches for the rest of his life,” Legge recalled. “It was a horrible disease really, but it was like it is now — nobody knew how it was spread so they closed the swimming pools and the theatre and we stayed home on the farm for the whole summer.”

Legge said she recalls hearing of people who had long term effects from polio 40 and 50 years later and even though she is vaccinated for COVID-19 she will continue to follow the health guidelines.

“I’ve had my second shot now for three weeks,” she said. “But again, I still wear my mask and I'll continue to wear my mask.”

The last polio epidemic in Canada in 1959 caused paralysis in more than 2,000 people.

Information about polio and the vaccine schedule can be found at immunizealberta.ca.