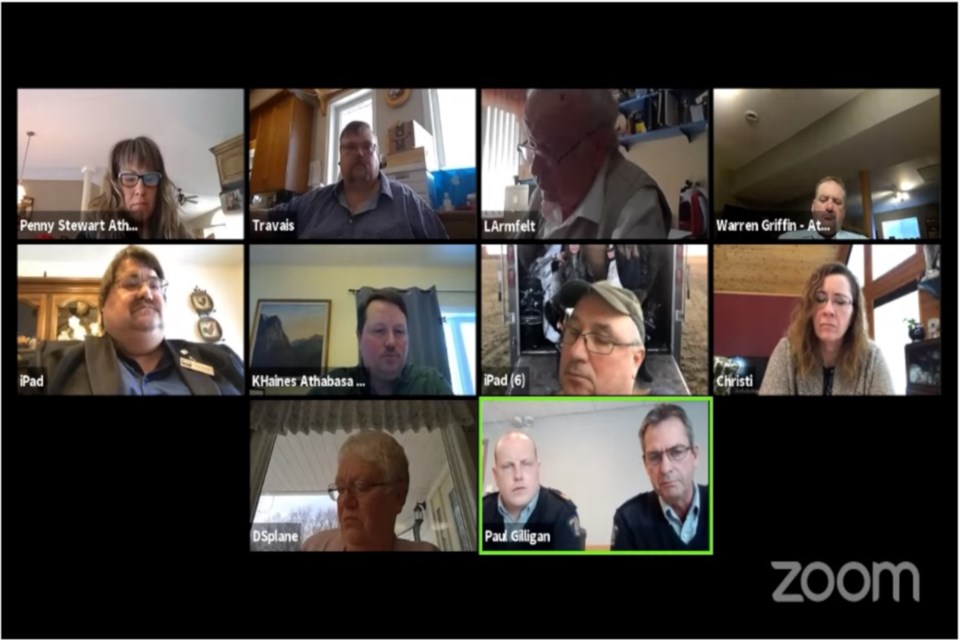 ATHABASCA — Crime stats in the Athabasca and Boyle RCMP detachment areas are way down in some areas, but way up in others.

Boyle RCMP Detachment Sgt. Colin Folk and Athabasca RCMP Detachment Staff Sgt. Paul Gilligan presented their annual reports to Athabasca County council Feb. 25, noting that while property crimes are down significantly in the last year, others are up.

“There's some really good numbers there in terms of property crime, a lot of that's attributable to COVID, but we're seeing on average about a 60 per cent reduction across the board in property crimes,” Gilligan said. “The downside to that is our assaults are up considerably.”

He added it is hard to compare this year to previous years because of the pandemic, but noted any time there is a reduction in crime it is good news.

Both officers are also seeking public input for any initiatives the public would like to see and will be engaging with the public.

“In addition to (advertising in the) newspaper, we are planning on attending a Farmers' Market. It has been very difficult for us to find a public venue to engage with the public; to speak with people one-on-one,” he said. “On March 13, both detachments are going to be in the Athabasca Multiplex for the Farmers’ Market to speak to people about what their concerns are on the ground.”

Gilligan noted his detachment is down two members who are away for the foreseeable future and he is going to retire soon, but new cadets are arriving.

“We have received three cadets in the last few months that we’re in the process of training, and we're going to be getting another cadet (in the) first week in April so, we should be almost up to snuff in the next couple of months which is good news because we’ve gone through a rough period the last three months,” said Gilligan. “The other thing I wanted to let you know was I put in for my retirement for April.”

Folk also informed council they are getting a new recruit in Boyle and that the Integrated Traffic Unit is on track to meet their target in violations.

“We’re looking at 420 violations this year, and ... we’re on par to meet that number despite COVID,” Folk said. “We had a slow summer but we ramped it up (in) the last quarter.”

Coun. Travais Johnson said he thinks people staying home due to the pandemic has helped lower the property crimes as they notice strange vehicles in the area — Gilligan agreed.

“Our reports of suspicious persons and suspicious vehicles are up considerably in the last period as well,” he said. “People are picking up the phone and calling us much more frequently.”

Coun. Dwayne Rawson asked Folk if a recruit could be used to provide ATV education in Wandering River in spring as a lot of complaints come to Athabasca County and the RCMP about off-road vehicles in the area.

“That's something I've been thinking about for the last couple of weeks here in the spring, we're gonna have to get ahead of that before it spirals out of control. So, I think we need to look at getting up there and meeting with the stakeholders," said Folk. “I’ve got to get some education out there and my plan is to take a pretty firm grasp on it this spring and shut it down for the rest of the summer. If education doesn't work, we'll flip over to enforcement and I will get the traffic guys on board with that. We'll have more police cars in Wandering River dealing with ATVs than they want to have.”

Coun. Penny Stewart said she has been getting calls from ratepayers complaining about escalating thefts in the Wandering River area, but Folk said the stats do not support that.

“No, we're seeing a huge decrease up in that area. So, I don't know if those calls are coming from a specific group of people who have been affected by this but our stats definitely showed different,” he said. “Everything's dropped right off in that area.”

Gilligan also introduced Cpl. Alan Caldwell as his temporary replacement between when he leaves in April and his replacement arrives.

“I worked in traffic here from 2013 until 2020 and then I moved into corporal here January of last year,” Caldwell said. “I've been in the corporal spot here for about a year, but I've been in the area for some time so, I'm fairly familiar with all the areas and Boyle area as well.”

Council thanked Gilligan for his years of service and wished him well in his retirement.