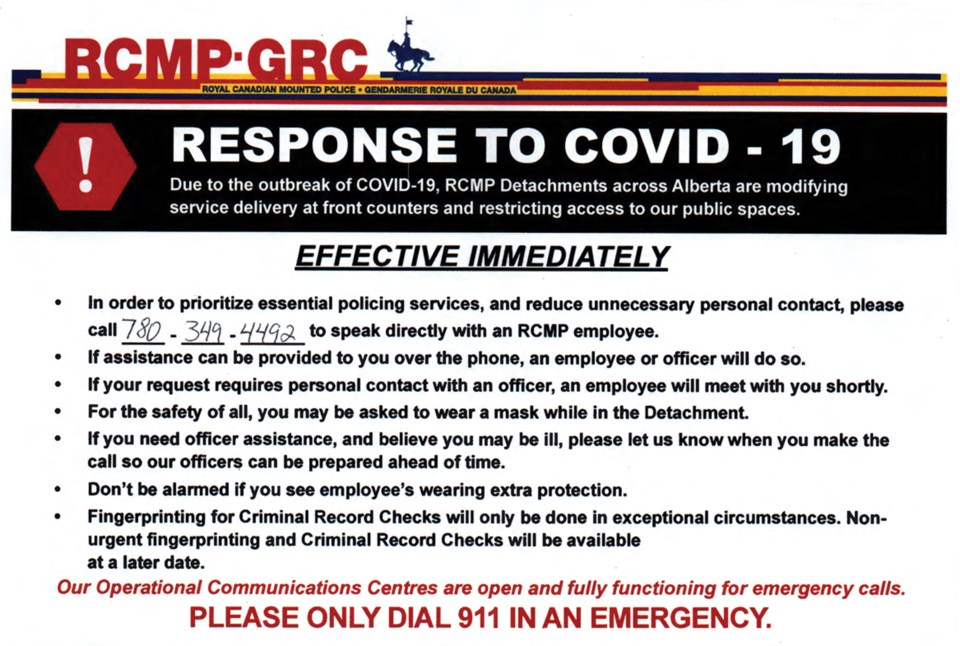 WESTLOCK - Deployment of the federal Quarantine Act, in addition to the province granting full authority to law enforcement agencies to enforce public health orders, means local RCMP and community peace officers can issue fines of up to $1,000 if people don’t follow the guidelines to combat COVID-19.

In addition, businesses that ignore public health orders could face fines of up to $100,000 for a first offence and up to $500,000 for subsequent offences for more serious violations. The new fines were set to come into force in the coming days.

Westlock RCMP Staff Sgt. Al Baird said they’ll initially try to educate the public before resorting to issuing a ticket. Late last week, community peace officers and town staff made the rounds of businesses, checking for COVID-19 signs on the doors and making sure there was adequate spacing for customers. They also handed out information packages, which included a letter from the mayor, and ensured compliance with AHS measures.

“I think there needs to be a few legislative changes in order to implement it fully, so we’re not running out issuing tickets,” said Baird March 26, noting they haven’t received any tips from the public in regards to people not self isolating or social distancing.

“I think at the beginning it will mainly be education like anything. We want to talk to people first and if that isn’t working then you have the enforcement option.”

Town of Westlock mayor Ralph Leriger said the local state of emergency will remain in place at least until those legislative changes are made.

“It has to be updated every seven days. We will continue it for another seven days just to support the decision that the province has made,” said Leriger.

In his travels around Westlock, Baird said he’s seen businesses and the public making the right choices.

“I haven’t seen anything in my time driving around town. The biggest thing is that you educate people first.

“I mean there’s a lot of good things happening, people helping their neighbours if they can’t grocery shop and things like that.”

Leriger agrees: “I think what you’re seeing out there is people are taking it seriously and they are doing their best to comply with the rules and continue operation of the business, get people the goods and services that they need, but to practice good hygienic technique. I think you’re seeing pretty good voluntary compliance.”

As well, the RCMP aren’t taking any chances when responding to a complaint where an individual is sick, self isolating or showing symptoms of COVID-19.

In those cases, officers will wear their personal protective equipment, which includes a respirator mask, gloves, eye protection and overalls.

“It’s kind of like a hazmat kit where there’s a disposable bag and it has to be taken off in a certain way to not contaminate your clothing,” said Baird, noting the duty belt is worn on the outside of the suit and is wiped down if needed.

After the call officers will decontaminate and ensure the safe disposal of the coveralls and disinfect themselves and their equipment, including their vehicle if necessary.

“Every detachment is taking these precautions,” said Baird, noting that cellblocks and the detachment itself is being kept extra clean. “This is our new reality right now until things calm down.”