Samira Mahmoud suggests governments, in addition to COVID relief programs, could help small businesses with their advertising and marketing
May 4, 2021 11:00 AM By: Barry Kerton 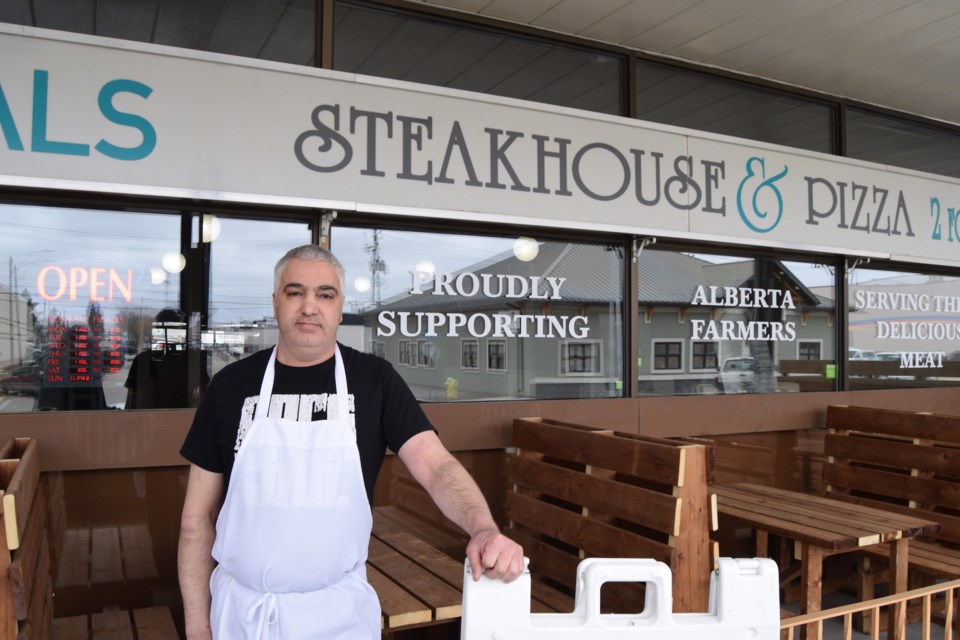 The co-owner/operator Jamal Mahmoud of Leals and Teals Steakhouse in Barrhead takes poses in front of the restaurant's new outdoor patio. Town of Barrhead council is looking into the possibility of allowing restaurants and coffee shops to open outdoor seating areas. Mahmoud's wife and co-owner suggested it would be more helpful if the town helped market eateries by installing signs on the highway letting passing motorists know of their existence. Barry Kerton/BL

Samira Mahmoud, who owns Leals and Teals with her husband Jamal, said that while she understands why people, including some in the business community, are resentful of the restrictions, they are necessary to curb what can be a serious and even deadly disease.

The Barrhead Leader spoke to Mahmoud about the impact the restrictions have had on her business and what the province and municipal government can do to help not only herself but other restauranteurs. More specifically, if she believed the Town of Barrhead should continue to investigate the potential of allowing eateries to open outdoor or sidewalk patios.

"[The restrictions] have impacted a lot of businesses," she said, adding that restaurants have been among the hardest-hit sectors. "Restaurants all over the province are closing permanently, in large part due to the restrictions and by not following the guidelines all people are doing is prolonging the restrictions, or potentially having them added to."

Alberta restaurants have had to restrict indoor dining on two occasions in the last 14 months, the latest being on April 9.

Even when they have been open public restrictions have imposed limits on in-person dining capacity.

However, despite the impact of the health restrictions, especially the loss of indoor dining has had on her bottom line, Mahmoud believes they are less harmful to businesses and society than letting the virus spread without check.

"Unfortunately, there are people who are not following the restrictions," she said. "Over a year ago, it all started with two people testing positive for COVID-19, who contacted it from travelling, and now we have had more than 200 cases."

As of May 3, the Barrhead region has recorded 284 COVID-19 total cases recorded since the start of the pandemic. Of those 169 reported as recovered, 113 of which are active. There have also been two deaths attributed to the virus. The highest number of active COVID-19 cases in the region has been 101.

By going into a business and not following public health restrictions, they are risking the people in that business.

Although she understands people are beginning to grow fatigued with following the health protocols, Mahmoud said they are necessary to slow the spread of the virus.

"I have to ask people to use the hand sanitizer and social distance and there are people that are still going out while they are sick. Many of them suspect they might have COVID, but they don't want to get tested because they can't afford to miss work, but instead they are willing to go and risk infecting others," Mahmoud said.

For the most part, her customers have been very understanding when she has to remind the odd customer to follow the health guidelines.

However, she said she has encountered hostility when asking customers to leave, even when they appear to be sick.

Early in the pandemic, Mahmoud was accused of being a "racist" after she asked a customer, who was clearly ill, exit the restaurant.

"Have you seen the colour of my skin?" she asked the customer. "I'm just trying to save my business."

Mahmoud came to Canada from Lebanon when she was four years old with her parents and siblings. They settled in Edmonton, where she stayed until she was 21 years old. She then started to explore the province, living in various small communities in Alberta and eventually settling in Barrhead 10 years ago.

She also gets upset when she hears people say that COVID-19 is a hoax, or that it is no different from the flu or that it only impacts people with underlying health conditions.

"It is real and potentially dangerous ... not just to the elderly or people with other health conditions," Mahmoud said, adding her healthy 31-year-old nephew contracted the virus and ended up in the ICU on a ventilator.

"He did not need to be put on a ventilator when he got the flu," she said. "It's not a joke, this is real."

She noted that a substantial portion of the population has health conditions that put them at a substantially higher risk of a poor outcome from COVID, including herself.

Nor is she happy about protests against the public restrictions.

"They are the ones getting us shut down," she said, referring to three local public health protests organized by Westlock DJ Benita Pedersen. "People standing, no masks, not distancing, with these big signs shouting. And now we have reached 235 total cases."

Proponents of the rallies have noted that no COVID-19 cases have been attributed to the events. However, Pedersen at the second "Enough is Enough" rally said that she would not work with Alberta Health Services contact tracers.

Nor does Mahmoud believe they will be effective.

"It's not like they are going to resign or back track the restrictions.”

Mahmoud said the various COVID-19 government relief programs from federal and provincial governments have helped her keep her doors open, noting she has applied and received the Canada Emergency Business Account (CEBA) program that allows businesses to apply for interest-free loans, the Alberta Small Business grant. She also hopes plans to take advantage of the Alberta Relaunch Grant.

The funds have not only helped her continue to operate but renovate the inside of the restaurant, to be ready for when restrictions are lifted.

What else governments can do to help restaurants

Mahmoud suggested one way the province can aid small businesses is by helping them with their advertising and marketing through local media as well as helping them to boost social media and online presence.

She said the move would help restaurants, especially those who were not already tailored for takeout, to let their customers know about the service.

"Not by giving you the money directly, but by paying for the help for you," she said.

Mahmoud added that although the Town of Barrhead is on the right track investigating the potential of helping eateries open outdoor dining areas, she wonders how effective the effort will be.

Although she said that her outdoor dining area has been well received in the short time it has been open, those who could open a patio relatively easily have already done so.

"What the town could do is put up signs, telling motorists the location of those restaurants that are not on the highway that we exist," Mahmoud said.